What the Church Says About St. Joseph 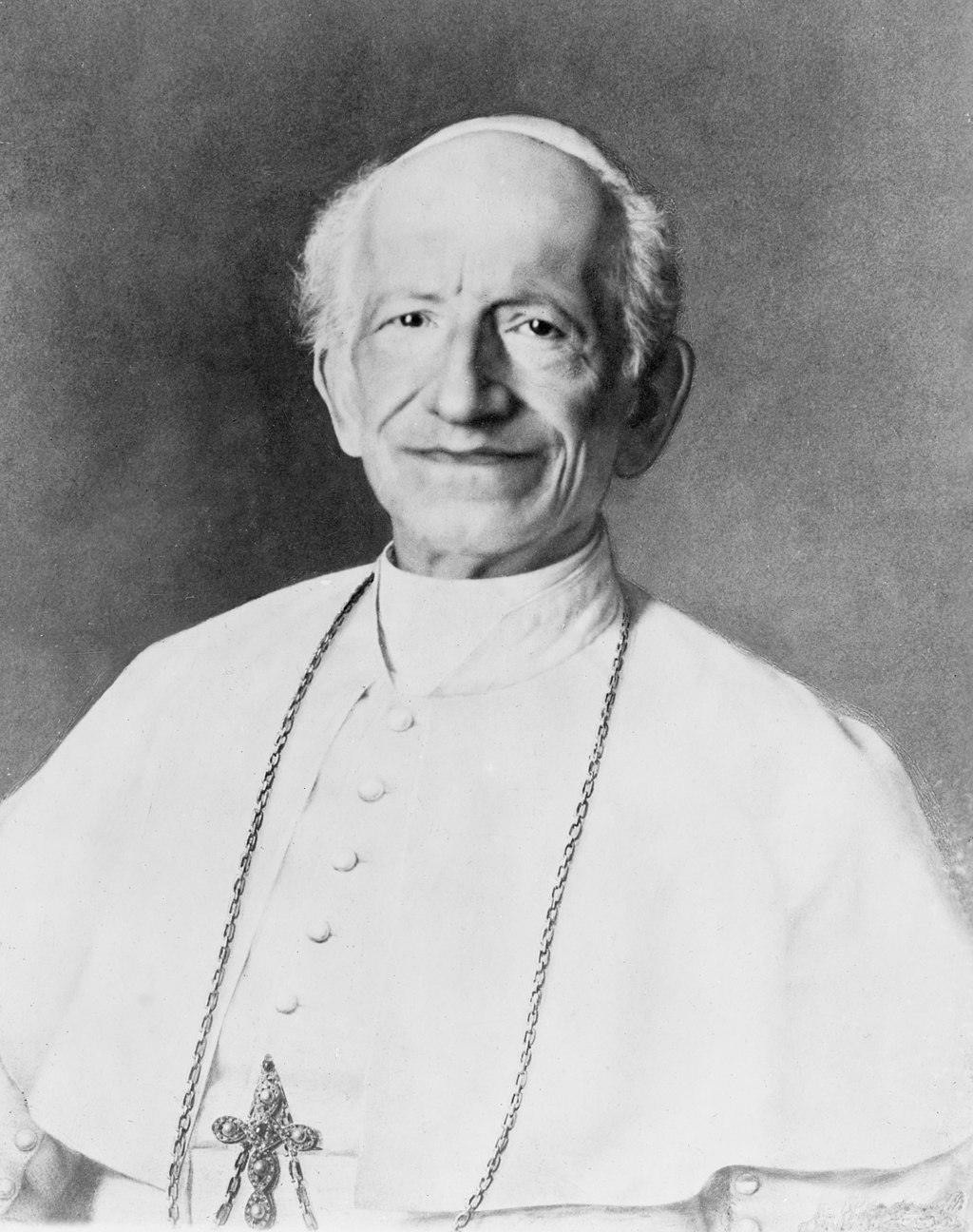 “The special motives for which St. Joseph has been proclaimed Patron of the Church, and from which the Church looks for singular benefit from his patronage and protection, are that Joseph was the spouse of Mary and that he was reputed the Father of Jesus Christ. From these sources have sprung his dignity, his holiness, his glory. In truth, the dignity of the Mother of God is so lofty that naught created can rank above it.

But as Joseph has been united to the Blessed Virgin by the ties of marriage, it may not be doubted that he approached nearer than any to the eminent dignity by which the Mother of God surpasses so nobly all created natures. For marriage is the most intimate of all unions which from its essence imparts a community of gifts between those that by it are joined together. Thus in giving Joseph the Blessed Virgin as spouse, God appointed him to be not only her life’s companion, the witness of her maidenhood, the protector of her honor, but also, by virtue of the conjugal tie, a participator in her sublime dignity. And Joseph shines among all mankind by the most august dignity, since by divine will, he was the guardian of the Son of God and reputed as His father among men.

Hence it came about that the Word of God was humbly subject to Joseph, that He obeyed him, and that He rendered to him all those offices that children are bound to render to their parents. From this two-fold dignity flowed the obligation which nature lays upon the head of families, so that Joseph became the guardian, the administrator, and the legal defender of the divine house whose chief he was. And during the whole course of his life he fulfilled those charges and those duties.” 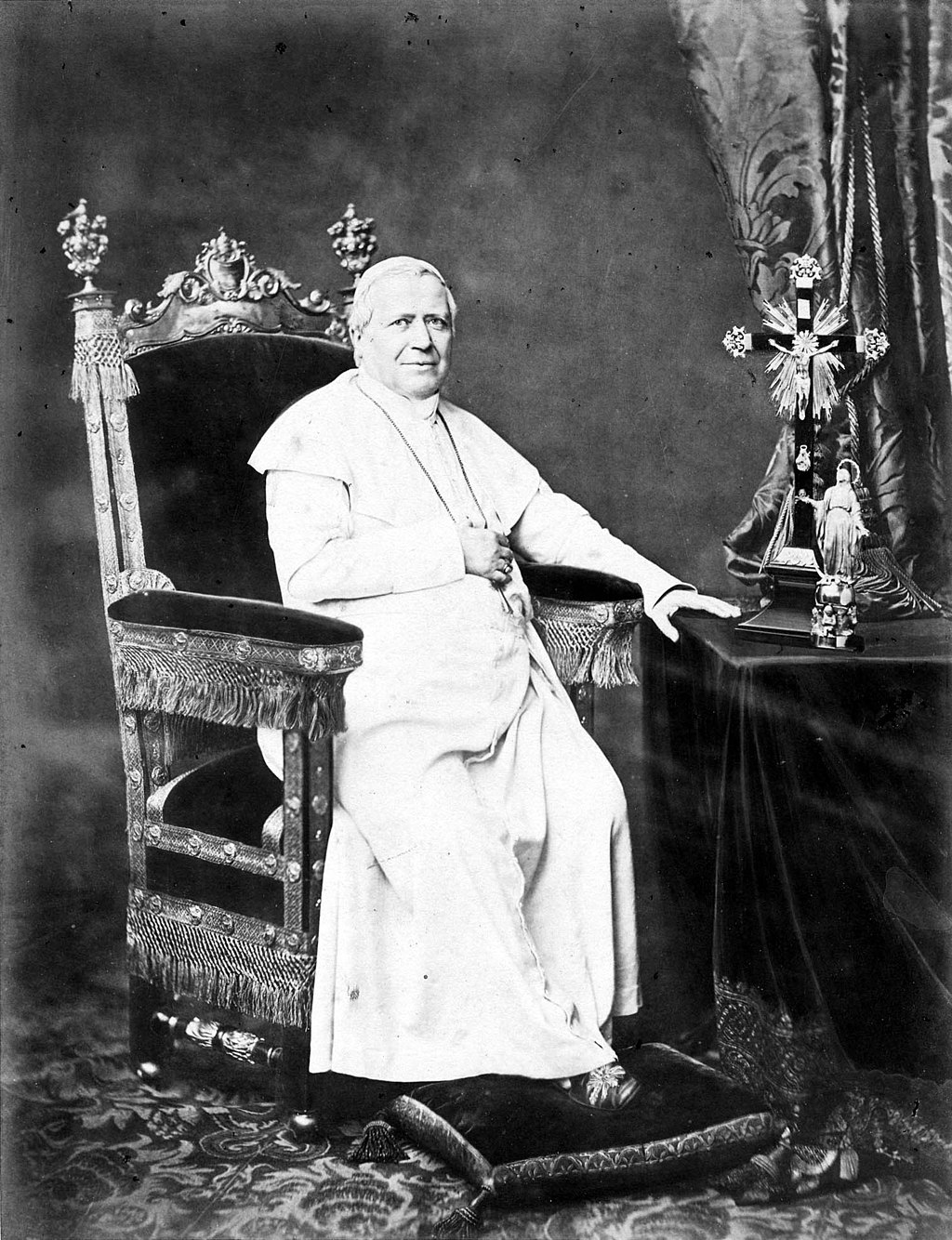 “Him whom countless kings and prophets had desired to see, Joseph not only saw but conversed with, and embraced in paternal affection, and kissed. He most diligently reared Him whom the faithful were to receive as the bread that came down from heaven whereby they might obtain eternal life.

Because of this sublime dignity which God conferred on his most faithful servant, the Church has always most highly honored and praised blessed Joseph next to his spouse, the Virgin Mother of God, and has besought his intercession in times of trouble.

And now therefore, when in these most troublesome times the Church is beset by enemies on every side, and is weighed down by calamities so heavy that ungodly men assert that the gates of hell have at length prevailed against her, the venerable prelates of the whole Catholic world have presented to the Sovereign Pontiff their own petitions and those of the faithful committed to their charge, praying that he would deign to constitute St. Joseph Patron of the Church.” 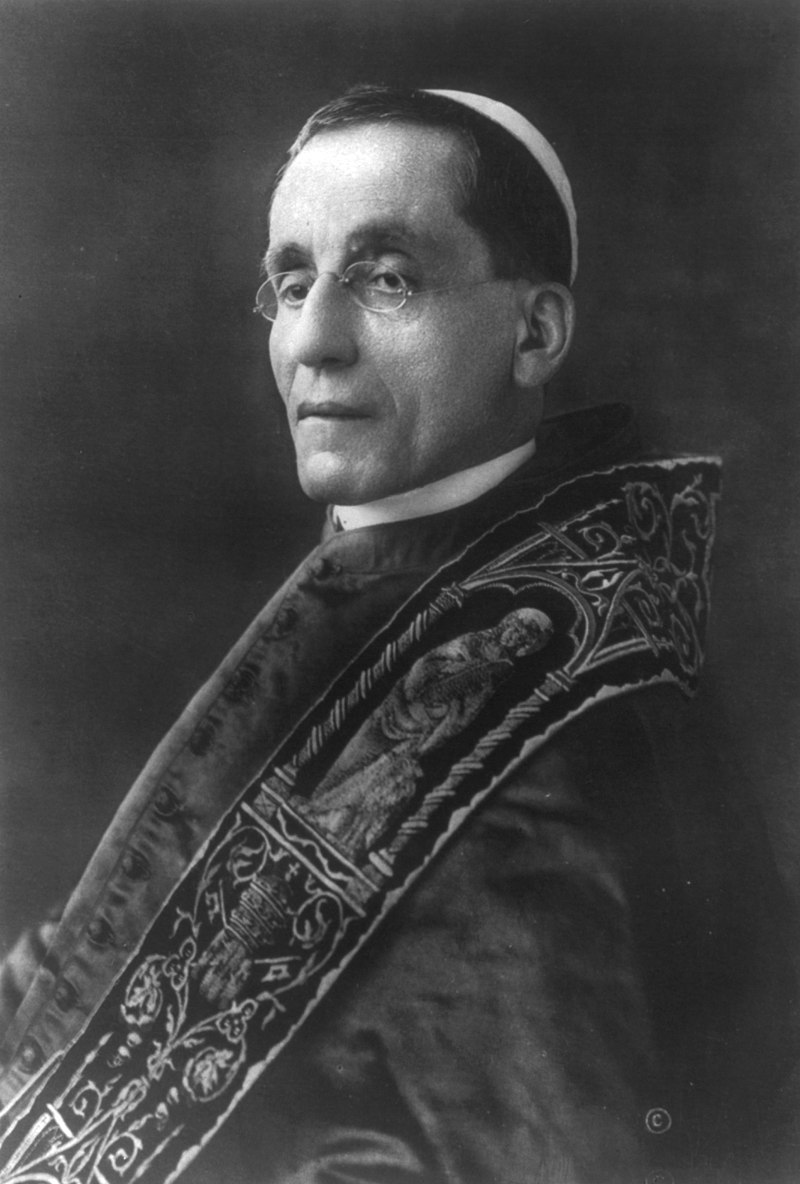 “It was good and healthy thing for the Christian people that Our Predecessor of immortal memory Pius IX decreed the most chaste Spouse of the Virgin Mother of God and Guardian of the Incarnate Word, Joseph, Patron of the Catholic Church, and since the fiftieth anniversary will occur in December of the auspicious event, we consider it very useful that it be celebrated solemnly by the whole world.”

“If we take a look at this period, a long series of pious institutions appears before our eyes which attest that the cult of the most holy Patriarch has gradually grown until now among the faithful of Christ. If we then consider the calamities from which mankind is afflicted today, it seems even more necessary that this cult be greatly increased among peoples and more widespread everywhere.”

“In fact, after the severe tension of the war, we indicated in our recent encyclical “about the reconciliation of Christian peace” what was missing to restore the tranquility of order everywhere, especially considering the relationships between people and people, and between individuals and individual in the civil field. Now it is necessary to consider another cause of disturbance, much more profound, which lurks precisely in the intimate bowels of human society. That is, then the scourge of war fell on human people, when they were already deeply infected with naturalism, that great plague of the century which, where it takes root, attenuates the desire for heavenly goods, extinguishes the flame of divine charity and removes man to the grace of Christ who heals and elevates – and finally takes away the light of Faith and leave him only the corrupt forces of nature – he leaves him at the mercy of the wildest passions. Thus it came about that very many gave themselves only to the conquest of earthly goods; and while the dispute between proletarians and masters had already intensified, this class hatred increased even more with the duration and atrocity of the war; which, on the one hand caused an intolerable economic hardship to the masses, on the other hand made fabulous fortunes flow into the hands of very few.” 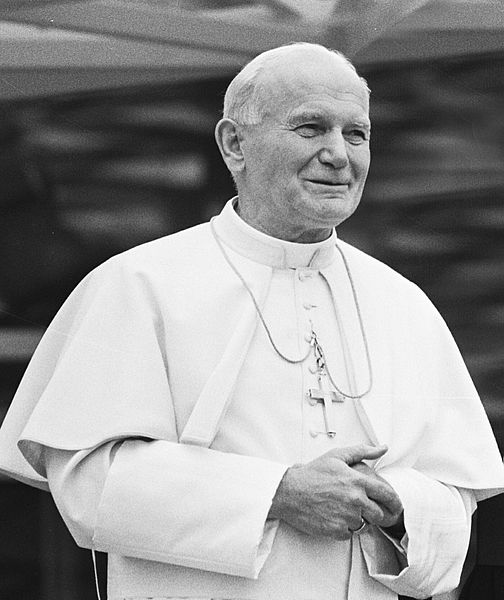 The Apostolic Exhortation of Pope St. John Paul II on the Person and Mission of St. Joseph in the Life of Christ and of the Church: Redemptoris Custos

“In this great undertaking which is the renewal of all things in Christ, marriage-it too purified and renewed-becomes a new reality, a sacrament of the New Covenant. We see that at the beginning of the New Testament, as at the beginning of the Old, there is a married couple. But whereas Adam and Eve were the source of evil which was unleashed on the world, Joseph and Mary arc the summit from which holiness spreads all over the earth. The Savior began the work of salvation by this virginal and holy union, wherein is manifested his all-powerful will to purify and sanctify the family – that sanctuary of love and cradle of life.”

How much the family of today can learn from this! “The essence and role of the family are in the final analysis specified by love. Hence the family has the mission to guard, reveal and communicate love, and this is a living reflection of and a real sharing in God’s love for humanity and the love of Christ the Lord for the Church his bride.” This being the case, it is in the Holy Family, the original “Church in miniature (Ecclesia domestica),” that every Christian family must be reflected. “Through God’s mysterious design, it was in that family that the Son of God spent long years of a hidden life. It is therefore the prototype and example for all Christian families.” St. Joseph was called by God to serve the person and mission of Jesus directly through the exercise of his fatherhood. 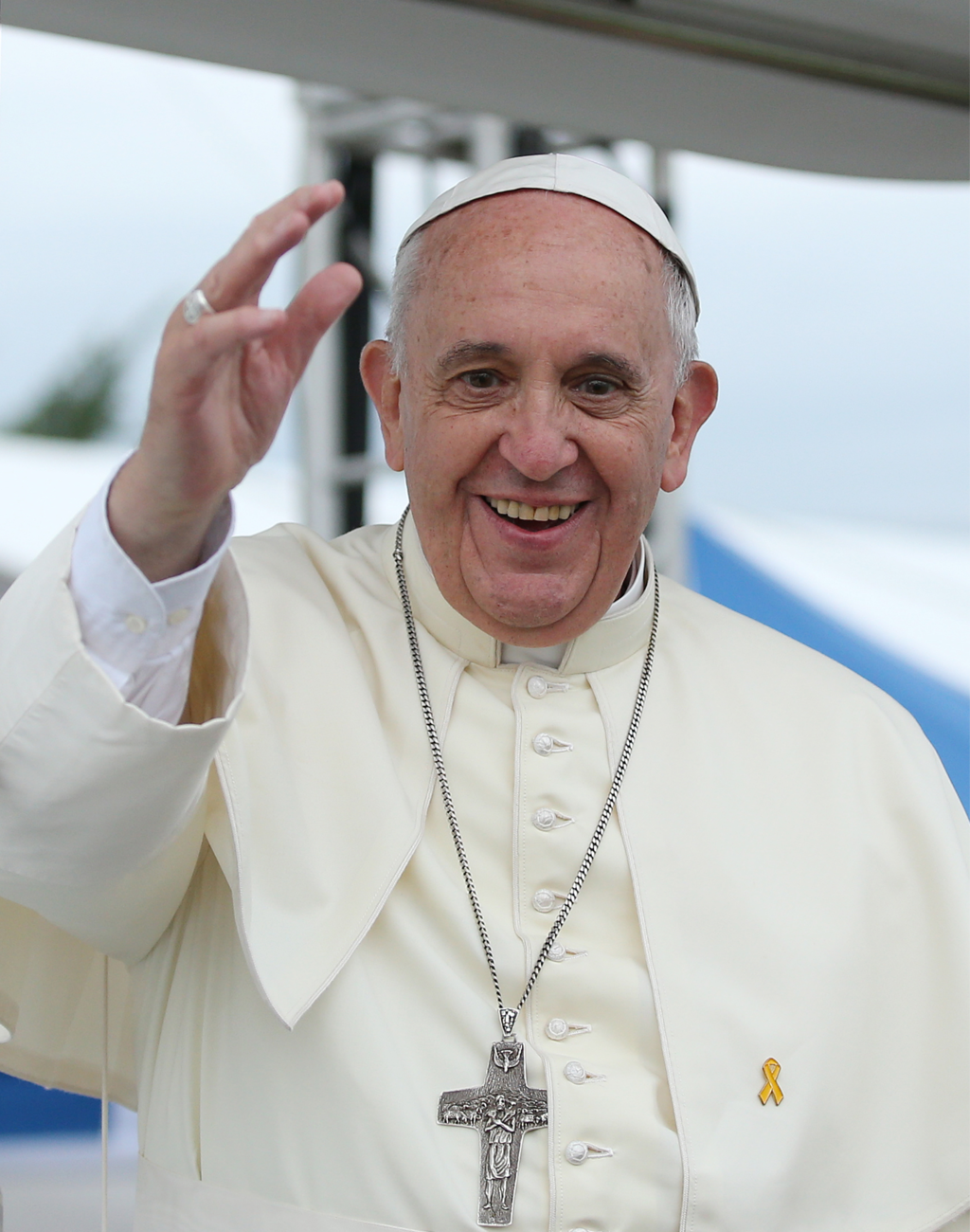 Apostolic Letter Patris Corde on the 150th anniversary of the Proclamation of St. Joseph as Patron of the Universal Church by Pope Francis

WITH A FATHER’S HEART: that is how Joseph loved Jesus, whom all four Gospels refer to as “the son of Joseph”.

Matthew and Luke, the two Evangelists who speak most of Joseph, tell us very little, yet enough for us to appreciate what sort of father he was, and the mission entrusted to him by God’s providence.

Joseph had the courage to become the legal father of Jesus, to whom he gave the name revealed by the angel: “You shall call his name Jesus, for he will save his people from their sins” (Mt 1:21). As we know, for ancient peoples, to give a name to a person or to a thing, as Adam did in the account in the Book of Genesis (cf. 2:19-20), was to establish a relationship.