Zwick’s mercy, assistance to the poor will be his legacy 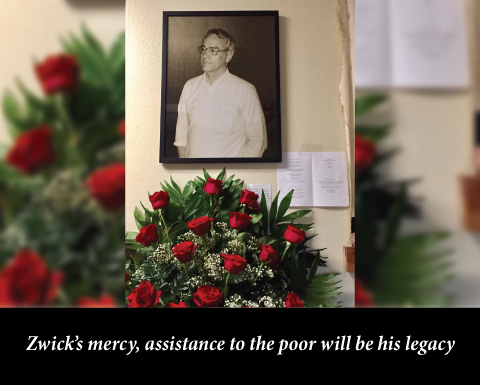 HOUSTON — It was still dark and chilly when poor and undocumented families began lining up outside the worn metal doors of Casa Juan Diego for food.

Hundreds more than usual had come for the weekly distribution, drawn by a reliable annual rumor that turkeys would be available.
Inside, as Catholic Workers and long-time volunteers finished organizing the beans, rice and produce, their mood was marked by a certain “joyful kind of sadness” and poignant sense of mission. This was the first Thanksgiving distribution without Casa Juan Diego founder, Mark Zwick, who had died just days before.

As the poor began filing in, it was clear there could be no better tribute to the man they would bury later that day than this: pressing on in the daily work of loving and serving Christ in the poor.

Zwick died Nov. 18 at his home in Houston from Parkinson’s disease. He was 88.

Along with his achievements of service and advocacy for the oppressed, the disabled, abused and undocumented, Zwick, who ran Casa Juan Diego with his wife, Louise, for 36 years, inspired and astounded others by his life of quiet sanctity that radiated a passionate desire to follow Jesus.

“Mark was one of the most profoundly holy people that I have known,” said Father Donald Nesti. “All his life he was a channel of radical grace reminding us that no one is left outside of God’s providence no matter how marginalized they may be from a cultural point of view,” he said.
The potency of his witness lay not only in heroic service, but in his embodiment of the Christian life as a sign of contradiction — voluntary poverty amid conspicuous consumption, kinship with the poorest and weakest in the most powerful nation on earth, other-centeredness in an age of narcissism, and mercy as the ultimate response to neglect and human suffering.

“He was an example of what it means to be like Christ in the modern world,” said Bob Kleeman, who has known Zwick for more than 30 years. “You can go to church, you can say your prayers, but he lived the Works of Mercy — not for Christ, not because Christ said so, but because he was doing it to Christ himself.”

The Zwicks exemplified the vocation of all despite rank or status to “to the perfection of charity.”

“They lived our faith in the most incredible and compelling way I have ever seen,” said former Catholic Worker Allison Ciraulo, referring to Zwick and his wife, Louise. As a couple so identified together, it is nearly impossible to speak of one without the other.

The Zwicks’ example of the universal call to holiness had a profound influence on the Church in Houston, said Archbishop Emeritus Joseph A. Fiorenza.

“They inspired so many people to want to be part of their ministry of mercy — lay people and priests and religious in the area. Here is a lay couple truly living the radical call of the Gospel which we religious people should be trying to do, too,” he said.

He said their service to the Archdiocese was “tremendous” and that he was “so grateful” for their work of mercy on behalf of God’s poor. He also pointed out that many seminarians learned from them how to be sensitive to the needs of the poor at Casa Juan Diego.

In 1980, the Zwicks rented the “ugliest building in Houston” to respond to influx of refugees from civil wars in El Salvador, Guatemala and Nicaragua. Based on the philosophy of the Catholic Worker Movement founded by Peter Maurin and Dorothy Day, they named it Casa Juan Diego, after the indigenous peasant to whom the Virgin of Guadalupe appeared in Mexico, “a Saint for nobodies,” they said.

Over the years, the center grew to include 10 buildings and would later receive migrants also fleeing smothering poverty and endemic gang violence. It became a lighthouse to a new life for the afflicted. More than a few migrants appeared at Casa’s door with nothing but a scrap of paper in their hands bearing its address, 4818 Rose St., somtimes carried from as far away as South America.

Rejecting bureaucratic and managerial methods, Zwick, who did administrative work late at night, was involved in the rigorous and exhausting work of personally receiving and caring for migrants, providing shelter, meals, clothing, medical care, and transportation, while meeting countless individual needs.

Kind, wise and gentle, he spent hours listening to the joys and tragedies of guests, his family said in a statement. The personalist philosophy he lived by insisted that true mercy also involved affirming the dignity and destiny of people who had been rejected. Zwick lightened many difficult moments and brought joy to both guests and volunteers with his sense of humor and shimmering wit.

In all, more than 100,000 men, women and children spent a night at Casa Juan Diego. The house continues to offer vital aid and financial support for the homeless, gravely ill and injured. About 500 families each week also receive food.

Well respected in Catholic intellectual circles, the Zwicks published the Houston Catholic Worker newspaper, a vehicle for exploring the Church’s social doctrine, as well as two books and scores of articles, rounding out a Catholic Worker program that educated, edified and evangelized.

For Marion Fernandez-Cueto, who came to Casa Juan Diego as a teenager, the vision of a completely integrated Christian life made a profound and lasting impression.

“I would witness Mark move seamlessly between the demands of manual labor, prayer, study and evangelization — waking up at 4:30 to write for the Casa Juan Diego newspaper, loading trucks for clothing or food distributions, handing out sandwiches to day laborers on the streets, counseling a suicidal guest, sharing the joy of the Gospel with a visiting group of high school kids or businessmen, reading and discussing the latest papal exhortation with Casa volunteers at lunchtime, and stopping again and again in the chapel for the daily office, adoration or Mass,” she recalled.

With Zwick’s passing, no one doubts what would happen next, including Archbishop Fiorenza.

“I have no doubt that Casa Juan Diego will continue,” he said. “Louise will continue to keep the memory of Mark alive by being faithful to the radically motivated gospel living of Dorothy Day and the houses of hospitality of Catholic Worker Movement, which I think should be called houses of mercy for the most in need of love and care.”