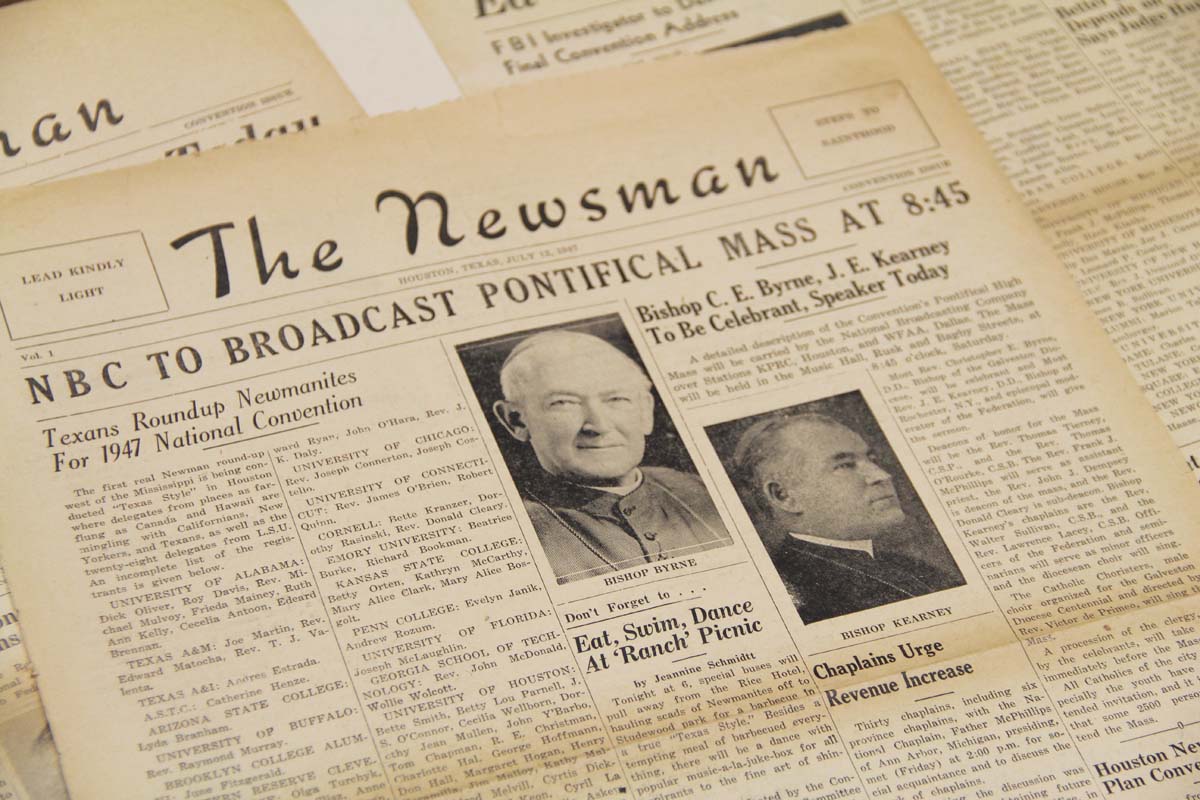 The Catholic Youth Organization, which was organized in the Archdiocese in 1937, published a monthly newspaper called The Catholic Youth before the Texas Catholic Herald began publishing. Photo courtesy of the Archives and Records Department.

HOUSTON — Each year, “American Archives Month” is observed in October. It is a celebration of the many archives across the United States and the priceless historical records they hold, from the Declaration of Independence in the National Archives to the parish records of the Archdiocese.

In the wake of the unprecedented natural disasters across the nation over the past months, archivists across the country are helping individuals and organizations with damaged and lost records, whether from flood or fire.

The Archives of the Archdiocese of Galveston-Houston date back to 1839. The Archives collect, organize and preserve records relating to the Catholic Church in southeast Texas. These include parish sacramental records from 1840, the letters of early bishops and deeds from the Republic of Texas.

They also have 20th and 21st century documents, in digital formats as well as paper. The office holds the records of Chancery offices, parishes, schools, organizations, institutions and even individuals. Taken together, they document the mission and ministry of this local Church for more than 175 years.

Over the years, the Archives has received various records of the Catholic Youth Organization (CYO), which was organized in the Archdiocese in 1937. Among them is a monthly newspaper published by the Houston district CYO.

The first issue of The Catholic Youth came out in January of 1941. The diocese had no paper of its own in these years (the Texas Catholic Herald began publication in 1964). The Houston CYO paper regularly carried news not just of youth activities, but also profiles of parishes and pastors, articles on St. Mary’s Seminary in La Porte and reports of diocesan events.

Not all of the parishes in Houston were represented, however. There was no mention of CYO clubs active in African-American parishes, which were not then included in the diocesan organization. Regular coverage of clubs at Hispanic parishes began only in 1947, with Houston’s Our Lady of Guadalupe Church.

The year 1947 was a busy one for the CYO and for the diocese. It marked the centennial of the original Diocese of Galveston, the first established in the state and the “mother diocese” of Texas. CYO members helped research and write a Centennial history of the diocese, with short profiles of each parish. The Catholic Youth carried articles about the anniversary, reporting on then-Bishop Christopher Byrne’s plans for an outdoor Mass in Galveston, which he expected to bring 100,000 Catholics to the city.

It also reported the cancellation of the celebrations, after the explosions of the “Texas City Disaster” devastated the area and left hundreds dead. The paper would report happier news later in the year, such as a visit from Babe Ruth to St. Thomas High School, and from Monsignor Fulton Sheen for the annual Christ the King celebration in November.
The staff of The Catholic Youth had an office in the Houston Chronicle building, where mentors from the daily paper assisted them in publishing their monthly paper.

In July of 1947, staff from both papers helped produce three daily broadsheets, or single-page editions, of The Newsman. It was a special publication for the three-day national convention of Newman Clubs held in Houston that month. CYO members worked in the registration booth at the Rice Hotel, welcoming delegates from around the United States and Canada, including one delegate from Hawaii (not yet a state).

Local members also attended the sessions, since the CYO then included college as well as junior and high school students.

The convention was covered in The Southern Messenger, a Catholic paper published in San Antonio, as well as in the secular press. But the three fragile, yellowing editions of The Newsman, filed among equally fragile copies of The Catholic Youth, offer a unique “on the ground” perspective. It is not clear how many copies were produced. Probably Newman Club members took some home with them along with other convention souvenirs.

Did any of those copies find their way into an archives, or are the pages in the archdiocesan Archives the only ones that survive, 70 years later? And what about the other districts and clubs of the CYO? Did they have their own publications? Did someone collect and save them, as the Houston district staff did theirs? If so, none of them are to be found in the files and boxes of the Archdiocesan Archives.