You are a ‘treasure’, Cardinal tells young people 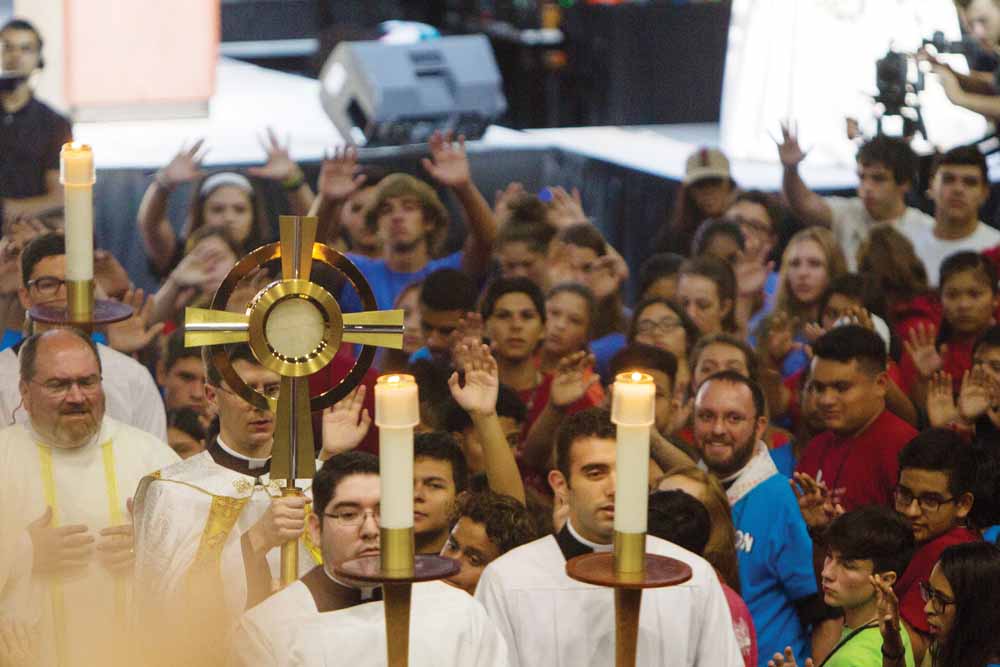 HOUSTON — Surrounded by thousands of teens from throughout the region at the 2017 Archdiocesan Youth Conference (AYC), Daniel Cardinal DiNardo encouraged the youth to seek holiness in all parts of their lives.

His homily in Sunday’s closing Mass capped a jam packed July 28 to 30 weekend in downtown Houston, which offered teens a chance to experience the local Church’s diversity and embrace the opportunity to share and deepen their faith through daily Mass, confession and other prayer experiences.

The theme of this year’s conference was “Holiness.” The speaker team this year included Kris Frank with Dirty Vagabond Ministries of Steubenville, Ohio; Paul J. Kim, beatboxer and youth speaker; Oscar Rivera, a hip hop artist and speaker; Katie Prejean, a “theological comedian” and speaker; and music by Ike Ndolo of Tempe, Ariz.

PHOTOS: 2,600-plus dance, sing, pray and worship together

Joe Melendrez, rapper and speaker, and Brian Henritze, associate director of the Office of Adolescent Catechesis and Evangelization (OACE), were the main emcees for the weekend at the George R. Brown Convention Center.

The devotion to Our Lady of Fatima, seen through the eyes of the children who saw her 100 years ago, was featured throughout the weekend, especially on Friday evening, which included a special Rosary to Our Lady of Fatima for the repose of the soul of Brian Johnson, the former OACE director and founder of AYC. Johnson passed away June 19.

Father David Angelino, parochial vicar at St. Jerome Catholic Church, led benediction and Adoration on Saturday evening, and joined dozens of other priests from the Archdiocese to hear hundreds of confessions throughout the weekend.

In our culture at large young people, you’re only important as long as you’re useful — all things useful are packaged and consumed. You’ve neither been packaged, nor can you be consumed. No, you’ve been called.

“God has never made anyone who isn’t perfect in His eyes as they came forth from His creative heart and mind. You are important,” Cardinal DiNardo said. “In our culture at large young people, you’re only important as long as you’re useful — all things useful are packaged and consumed. You’ve neither been packaged, nor can you be consumed. No, you’ve been called. You are precious, even as you find the treasure of the Kingdom of Heaven. You’re a treasure, and everyone you meet is a treasure.”

Cardinal DiNardo reminded the teens that they, too, are called to be leaders in the Church.

“In your good judgments, as was true with Solomon and little Daniel, you may be able to lead us, the elders, in right judgement.”

For more about the Archdiocesan Youth Conference, visit www.archgh.org/oace.