Year of Mercy draws to a close Nov. 20 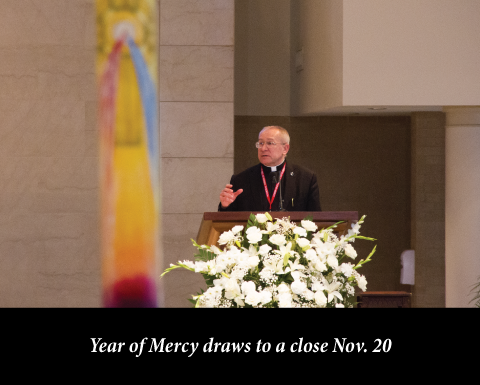 HOUSTON — On the weekend of the feast of St. John Paul II, Oct. 22, more than a thousand flocked to learn more about the message of Divine Mercy at the Second North American Congress on Mercy at Prince of Peace Catholic Church in Houston.

Presented by the Marians of the Immaculate Conception and Fullness of Truth Ministries, the conference focused on Divine Mercy in the lives of the Church's faithful.

Speakers included Daniel Cardinal DiNardo, who celebrated Mass on the Polish pontiff's feast day; Bishop Edward B. Scharfenberger of Albany, New York; Bishop Eugenio Lira of Matamoros, Mexico; Father Jan Machniak, who was the personal representative of Krakow's Stanislaus Cardinal Dziwsz, the former secretary to St. John Paul II, as well as a number of other Marian priests and laity who shared testimonies of Divine Mercy thriving and changing their lives.

From the beginning of his papacy, St. John Paul II emphasized Divine Mercy, according to Cardinal DiNardo.

"In his first encyclical, Redemptor Hominis, he already mentioned Divine Mercy,” cardinal said in his homily. “St. John Paul II, quietly, but step by step and then more urgently, pushed us on to recognize that in the 21st century, what we need is Divine Mercy.”

John Paul II recognized St. Faustina's message as an “action of the compassion and mercy of the Father, Son and Spirit.”

That Divine Mercy, he said, flowed through John Paul II, Benedict XVI and now Pope Francis, who “pushed it” to the outlands, “starting from the center and moving out” calling the Church to be “missionary disciples of mercy.”

Walking through John Paul II's life in Krakow, one rife with loss, war and suffering, Father Machniak said the young Karol Wojtyła would pray in the chapel of the convent of the sisters who would expose the second image of Divine Mercy Jesus. There, he first encountered Divine Mercy, eventually praying the Divine Mercy Chaplet with others. Studying theology after World War II ended, John Paul II then realized what he had to do with his life.

After losing his family, he realized his vocation to become a priest. After his ordination, he developed a community of young people, enriching them with discussion and life. Years later, as Archbishop of Krakow, then pope, he would read St. Faustina's handwritten journal, then calling for the veneration of the image of Divine Mercy, saying it was a “message for our time.”

“I am very happy that I can speak to you today about this message of Divine Mercy because I am convinced you can be like Sister Faustina,” Father Machniak said. “As apostles of Divine Mercy in your families, parishes, you can give testimony of Divine Mercy of God to show that God is really merciful.”

“I wish that, like in the life of John Paul II, Pope Benedict and Pope Francis, you feel this presence of mercy and you are able to give this testimony to Divine Mercy.” Father Machniak said. “Mercy is a way that unites God with men and men with men, like a bridge from ourselves to another people.”

Cardinal DiNardo encouraged the attendees to live a life of mercy, calling the congress a success if that testimony is lived.

“We are moved to run for Divine Mercy and compassion having received the precious and life-giving Body and Blood of Jesus in Communion.” said Cardinal DiNardo. “And when you continue to talk, think and pray and to nurture one another, to feed the sheep here and when you get home and then Divine Mercy Congress is an absolute success.”

For more information on NACOM including the dates for WACOM IV in Manila, visit mercycongress.org.