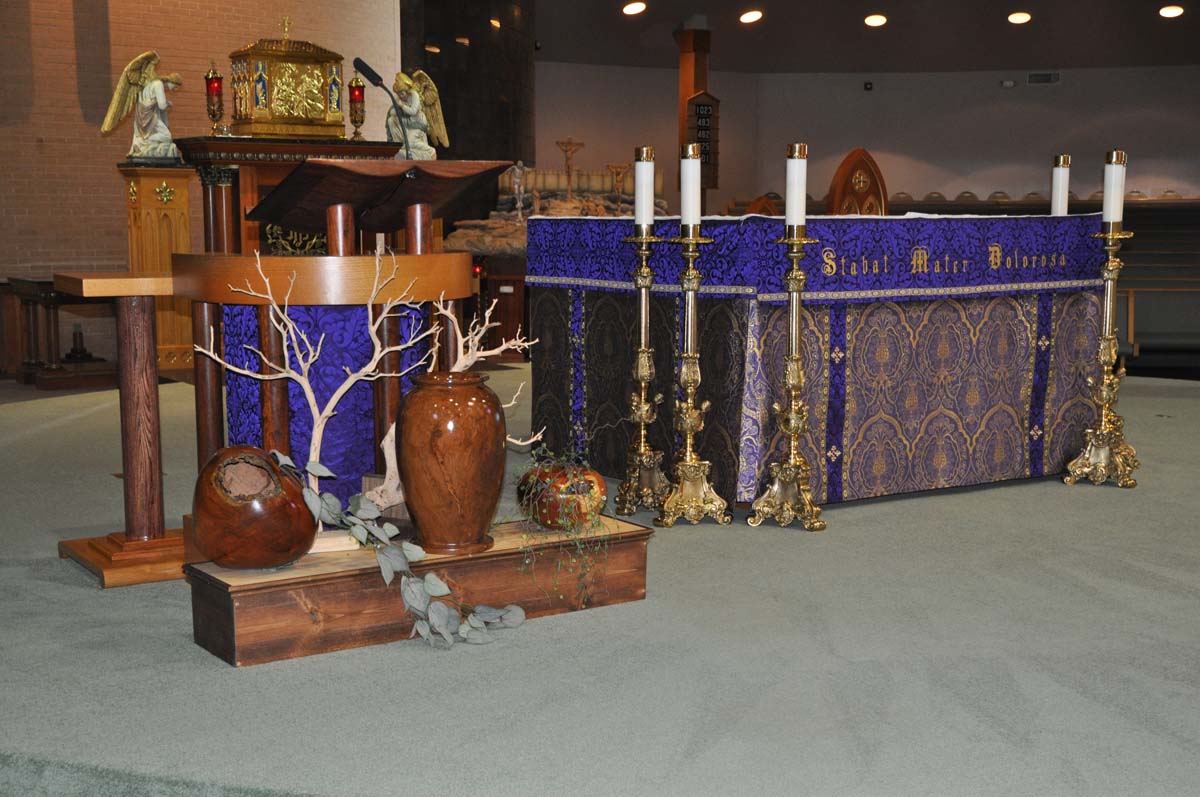 The altar and ambo of Epiphany Catholic Church in Katy is adorned with rich satin purple colors, barren of colorful flowers with stark branches and earthen pots and greens to reflect the Lenten season. Photos by Jonah Dycus/Herald.

“The moment you walk into the space, you know something different is going on,” said Rebecca Hill, an art and environment consultant for the Archdiocesan Office of Worship.

During Lent, the liturgical season immediately preceding Easter, Catholics are called to repentance. Through reflection and understanding of their own sinfulness, the faithful are able to more fully appreciate their need for a savior and contemplate the suffering and death of Jesus on the cross.

“We walk into [the worship space] longing to experience something sensory,” said Hill. “We are open to the sensory experience.”

The tradition of decorating for liturgical seasons and feasts heightens the awareness of the festive, solemn, or penitential nature of these seasons. According to guidelines from the U.S. Conference of Catholic Bishops Committee on the Liturgy, “human minds and hearts are stimulated by the sounds, sights, and fragrances of liturgical seasons, which combine to create powerful, lasting impressions of the rich and abundant graces unique to each of the seasons.”

Colors play an important part in the liturgical year of the Catholic Church for just that reason. Color creates an immediate, emotional connection with the meaning of an event.

The purple (actually a shade of violet) of Lent has two meanings: penance and royalty. The deep, dark color is meant to focus attention on the fasting and repentance associated with the Lenten season. As an act of derision, Pilate placed a purple robe on Jesus, whom he called “King of the Jews”. It is proper then that the final Sunday of the liturgical year is the Solemnity of Christ the King, in which the true royalty of Christ is proclaimed.

Many parishes will replace altar cloths, banners and other colored fabrics throughout the worship space with purple versions.

The General Instruction of the Roman Missal, the document governing the celebration of Mass of the ordinary form, states that “during Lent it is forbidden for the altar to be decorated with flowers.”

In their place, parishes will often replace the floral arrangement with dried sticks, branches and stones to invoke a desert-like sense of dryness and wanting.

“It’s really interesting that Lent, being a season of stark imagery, is really easy to overdo,” shared Hill, also a certified floral designer. “Too many branches, too many pots, too much distraction.”

Hill advises focusing on simplicity when it comes to decorating the sanctuary and worship space for Lent. The austerity of the unadorned space can reinforce the Lenten themes of fasting and abstinence.

She reminds art and environment teams that decorating the sanctuary is not like decorating a house. It must relate to both the season and to the purpose of the space.

“When we add decoration, we need to make sure that it complements the reason we are there – the sacrifice of the Mass,” she said.

Hill recalled an instance of unintentional insight. While decorating a church for Lent, she draped a piece of cloth on the back wall of the sanctuary. The cloth was too long, so she tied a knot in the middle of it to shorten the length.

“I was amazed at the number of people who came up to me and shared how it helped them to contemplate the knots in their own lives,” shared Hill. “It was beautiful, the different reflections the people had.”

The season of Lent lasts from Ash Wednesday until the Evening Mass of the Lord’s Supper on Holy Thursday, at which point the Church enters into the Easter Triduum.