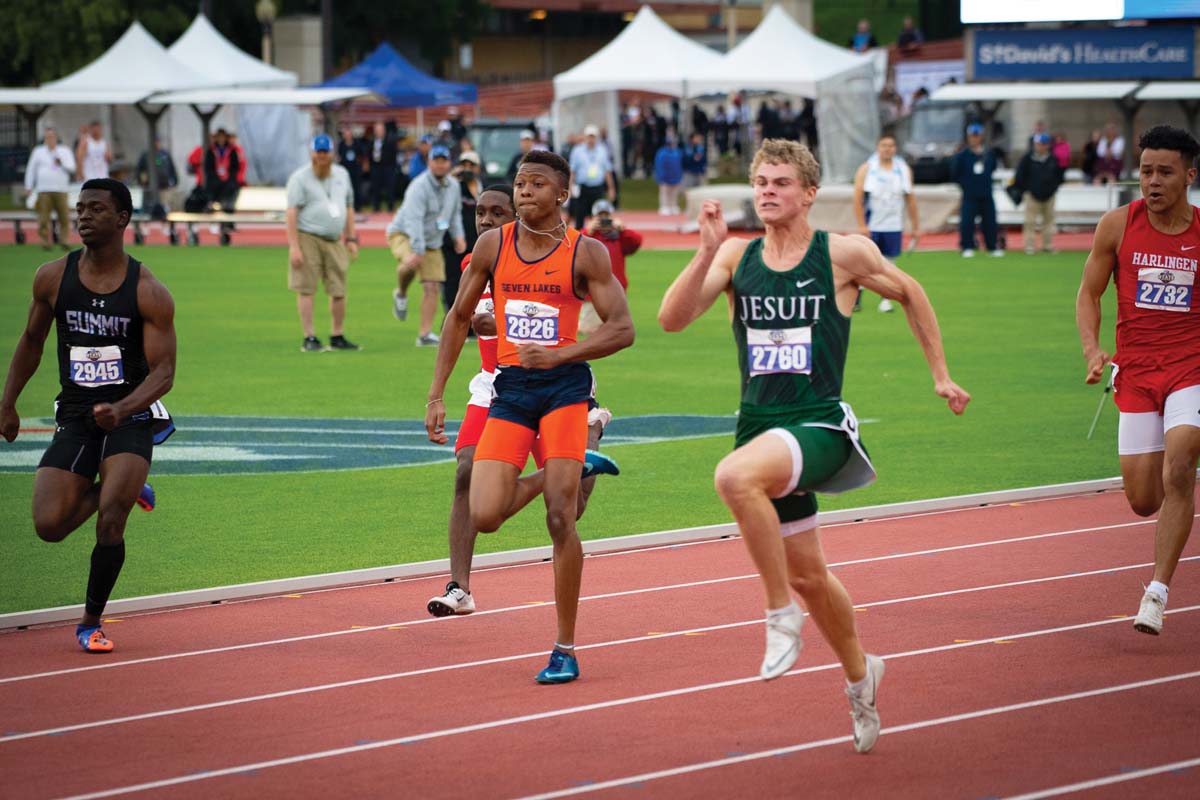 Record-breaking track runner Matthew Boling, given the nickname “White Lightning” by the media, has his sights set on the Olympics in Tokyo in summer 2020. Photo courtesy of Strake Jesuit College Preparatory.

HOUSTON — The excitement is palpable in the stands when Matthew Boling, a senior at Strake Jesuit College Preparatory, gets on the starting line.

Boling is best known for breaking 10 seconds in the 100-meter dash with a wind-aided time and then breaking the official national high school record for the same 6A race at the UIL State Track and Field Championships in Austin on May 11. The 18-year-old also won gold in the 6A long jump at 25 feet, 4.5 inches.
He then anchored the 6A 4x400-meter relay, pulling off the victory after starting 20 meters behind, which brought the 25,000-plus fans in the stadium to a roaring chaos.

But the frenzy doesn’t stop at the track. Nearly every media outlet in the country has been knocking on Boling’s door. He was featured on ESPN, Sports Illustrated, NBC Sports and Runner’s World, just to name a few.

“It feels weird because I’m used to just being at the meets without attention but now people will ask for pictures and stuff when I’m done,” Boling said. “I don’t let it affect my focus during competition week.”

Boling, who is Christian but not Catholic, said the media attention has made the team even stronger.

“It has strengthened my relationship with my teammates because I know they have always been there for me, not just because I’m getting attention, and I rely on them more for personal help,” he said.

Boling, who plans to major in business at the University of Georgia in Athens, Georgia, said the attention taught him “to stay humble and give God the glory and to know who’s there for you.”

He said he has had his eye on school records since he was a sophomore, but as he got older his goals began to get even bigger towards state records.

This summer he has three meets: Great Southwest, USATF U20 National Championships and the Pan American Games in Lima, Peru. Boling, who graduated from Strake Jesuit on May 26 with his twin brother and 2019 class valedictorian Michael, said the goal this year is to make the U.S. team for the Pan American games and “next year the goal is Tokyo.”

“Matthew has always been very talented, very goal-oriented with incredible work ethic. I always knew he would be very successful and do great things,” he said.

Collier said Boling and the rest of the team have handled the attention remarkably.

“He needs to have the same opportunity to prepare as everyone else and I have worked to create that environment for him,” he said. “He is very humble and has stayed grounded through all of this. I also was concerned about the pressure to perform and set records each week. Well, I guess I worried for nothing because every time he stepped on the track he made a statement.”

He added, “His teammates are true ‘men for others’ and have supported him along the way.”

Collier said Boling “has the rare ability to make everyone around him better. He inspires me to work and coach harder and more importantly he inspires the other athletes to work harder, be better students and ultimately be better people. He has built a legacy here at Strake Jesuit of significance, discipline and sacrifice.”

Throughout all of the milestones and attention, the coaches and the team remember to focus on God. Collier said coaches at Strake Jesuit follow the examples of Jesus and exhibits Cura Personalis — care for the whole person — which is characterized by openness, honesty, respect, fairness and responsibility.

“Our coaches strive for our Track & Field program to be an extension of the mission of the school,” he said. “Not only do our athletes compete for each other and the community, they compete for the greater glory of God.”

Father Jeff Johnson, SJ, president of Strake Jesuit, said Boling’s humility, determination and love for his teammates make him a great leader and example for other students who participate in their athletic and extracurricular programs.

“All the success our teams and extracurriculars have had is the result of coaches committed to our mission combined with students who understand their gifts are from God and with parents who want formation for their sons that’s guided by our faith,” he said. “We are certainly proud of Matthew, that he has represented both our school and himself with class, and allowed the nation, and even the world to see what we do here at Strake Jesuit every day.”

Collier said Boling and all the other graduating seniors “will be sorely missed.”

“However, their legacy will be seen throughout this program,” he said.

To the up-and-coming runners, Boling advised, “Trust the process and be patient.”

“It takes years to develop speed and fitness it just doesn’t happen over one season,” he said.