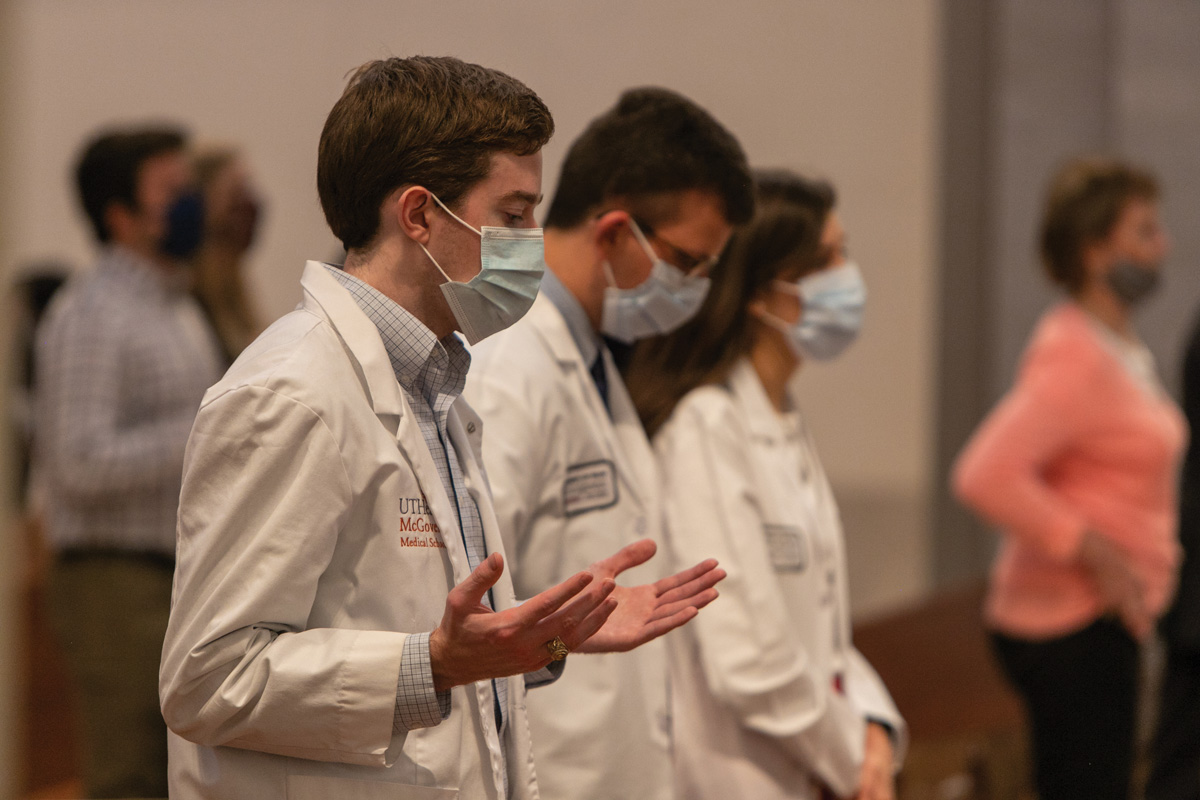 Members of Galveston-Houston’s large healthcare community during the archdiocese’s annual White Mass at the Co-Cathedral of the Sacred Heart Oct. 17. The Mass honors those who work in the healing medical professions, many of whom work in the Texas Medical Center, the largest concentration of medical facilities in the world. (Photo by James Ramos/Herald)

HOUSTON — Healthcare workers, many exhausted from caring for patients throughout the COVID-19 pandemic, were prayed for and blessed by Daniel Cardinal DiNardo at the Archdiocese’s White Mass Oct. 17.

In his homily, Cardinal DiNardo shared his grief with the thousands of first responders and healthcare professionals in Galveston-Houston bearing the brunt of the pandemic’s impact.

“In this difficult, terrible time of COVID-19 in the last eight or nine months, your work has been so intense, draining,” he said. “Your response is incredible and magnificent.”

Cardinal DiNardo encouraged the healthcare workers, even “in the harshest and most difficult of circumstances,” to always see the “image of God” in their patients.

“You have this gift that is given to you under grace,” he said. He recognized that the pandemic has been almost as traumatic for the healthcare workers as for the suffering patients. 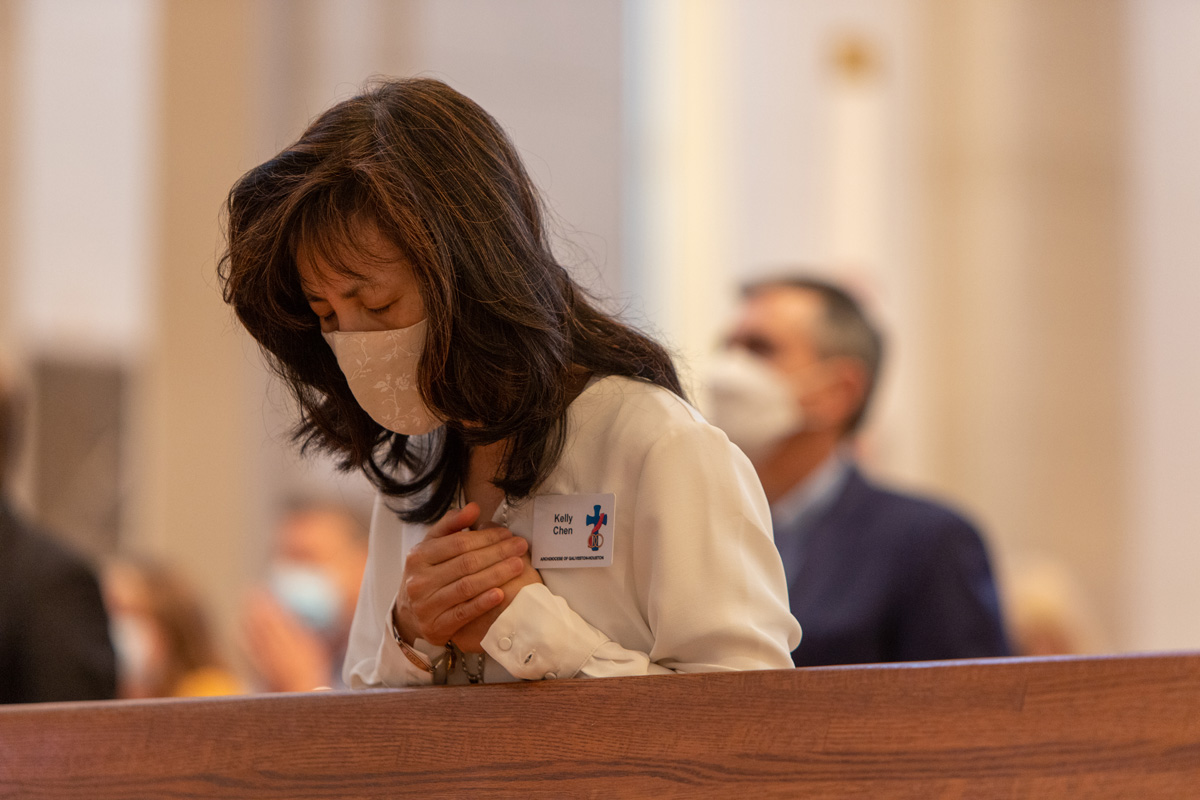 Following his stroke in March of 2019, Cardinal DiNardo said he grew acutely aware of the intensive efforts of healthcare workers, especially as he continued his rehabilitation. He said he grew immensely thankful for the hard work and “beautiful ministry” that many workers tirelessly do to improve the lives of those who may be at their weakest.

Part of the Mass included a special litany of prayers, invoking the intercession of patron saints like Our Lady of Lourdes for the community.

“Inspire them to grow in wisdom and knowledge to help all those created in your image and likeness,” prayed Cardinal DiNardo.

Dr. Carla Falco, president of the Catholic Healthcare Professionals of Houston (CHPH), said, “The pandemic has added another layer of stress, especially in its longevity of months. There have been so many heroic sacrifices. It remains challenging in its impact and the way we provide medical care for all.”

A pediatrician at Texas Children’s Hospital, Dr. Falco said, “Although hospitals are breathing a sigh of relief ... no one knows what the flu season will bring in combination with both illnesses.”

Lt. Col. William P. Mueller, MD, a family physician with the U.S. Air Force, spoke after the Mass on “Catholic Principles in the COVID Pandemic: Achieving the Greatest Good.”
The Mass, which was also attended by members of the Catholic Chaplains Corp, was open to the public and livestreamed online. Social distancing policies were observed, and masks were required.

Asked how she has dealt with the pandemic’s stress, Dr. Falco said, “We are really dedicating ourselves to personal prayer and leaning on the Lord. He is our rock and will get us through this.”

“We also [receive] the Sacraments as much as possible because they are tangible gifts that give us His grace,” she said.

Houston is home to the largest medical complex in the world and employs at least 366,000 healthcare workers at 19,954 healthcare and social assistance establishments, according to a 2019 report, in addition to 75-plus medical facilities also provide aid throughout the 10-county Archdiocese. 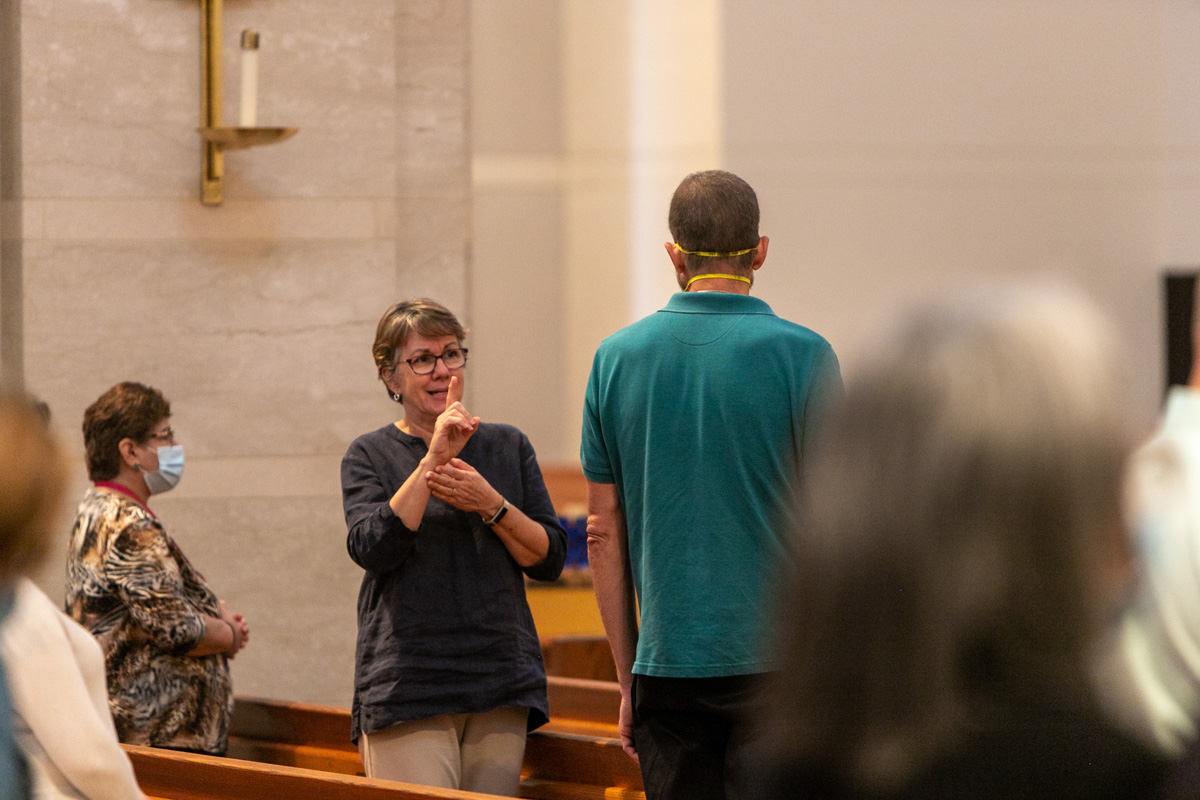 Dr. Edward Reece, plastic and hand surgeon with Baylor College of Medicine who practices at Baylor St. Luke’s Medical Center, also said focusing on Christ has helped him through the chaos of the pandemic.

“We have had daily Rosaries in the chapel of St. Luke’s when people have time to attend. It is a real blessing,” Dr. Reece said.

San José Clinic CEO and President Maureen Sanders, and Dr. Diana Grair, San José Clinic’s medical director, said treating patients with no insurance and high rates of diabetes, high blood pressure and other chronic illnesses can be challenging at any time, but has definitely heightened throughout the past seven months of the pandemic’s impact.

“We’ve had patients who are extremely distressed. They’ve lost jobs and have depression, so many are stressing and are thankful that we are still here to help,” Dr. Grair said.

Sanders added, “Initially, many of us thought this would be short-term of three months or through the summer. But the challenge has turned into not even a marathon, but like an Ironman competition.”

“Focusing on the White Mass and prayer, not only for those healthcare workers but all those we care for, can help us deal with this new reality,” Sanders said.