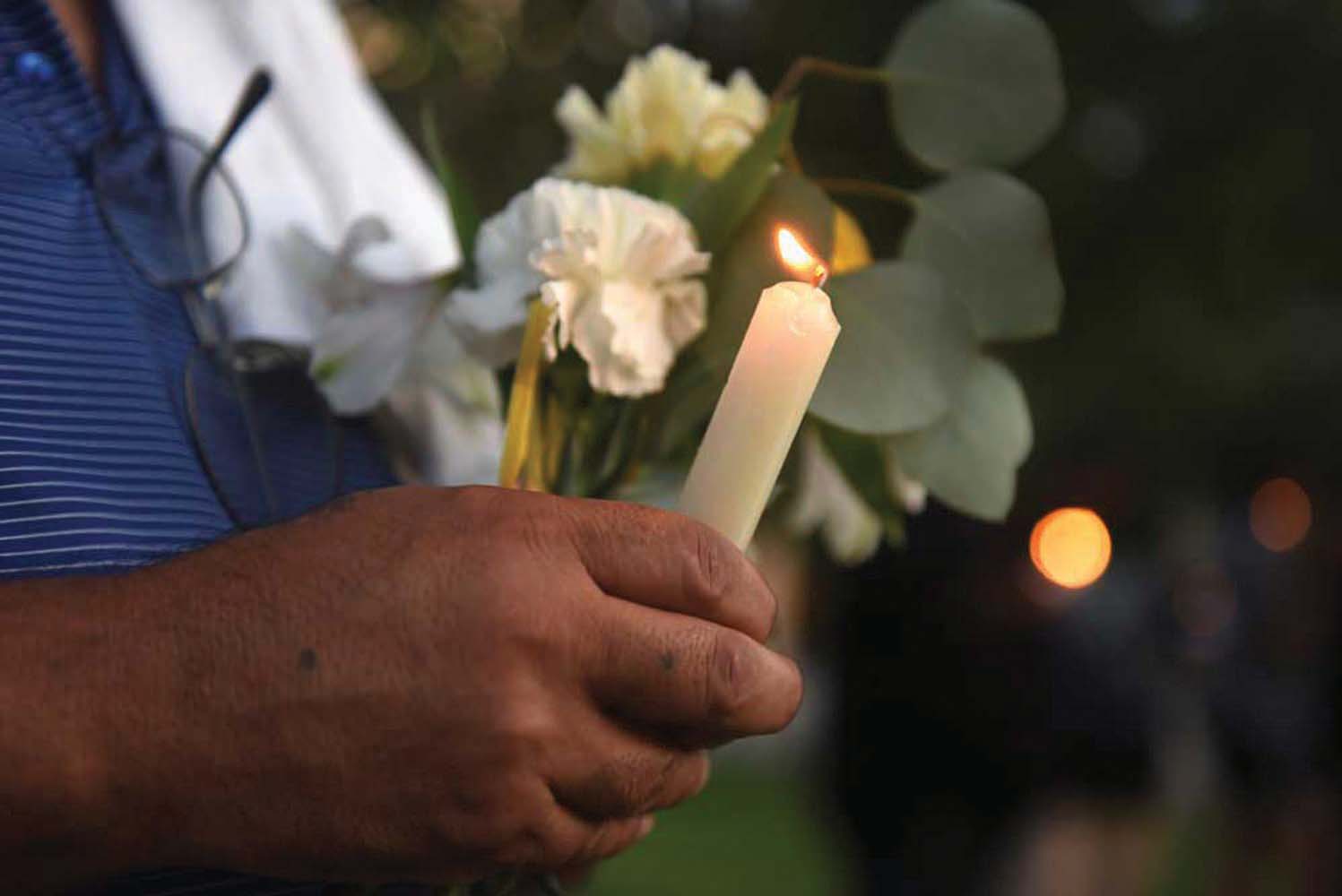 A man holds flowers and a candle as people gather for a Sept. 1, 2019, vigil following an >ug. 31 mass shooting in Odessa, Texas. (CNS photo/Callaghan O'Hare, Reuters)

WASHINGTON (CNS) - Catholic leaders from around Texas and the U.S. reacted with sorry and “heavy hearts” after a mass shooting in west Texas Aug. 31 claimed seven lives and wounded 25 others, shattering a holiday weekend right after the start of the new school year.

Daniel Cardinal  DiNardo of Galveston-Houston, president of the U.S. Conference of Catholic Bishops, said in a statement Sept. 1 that he was "deeply saddened to witness yet again scenes of violence and contempt for human life being repeated in our nation's streets."

He said Catholics attending Sunday Mass Sept. 1 "do so with heavy hearts" thinking of these victims and victims of recent "gun violence in California, Texas and Ohio."

He said the Aug. 31 shooting, which occurred as the gunman sped along highways in Odessa and Midland, Texas, "demonstrates unequivocally the undeniable existence of evil in our society."

Cardinal DiNardo also called on "people of goodwill," including Catholic leaders and the faithful, "to work tirelessly to root out the causes of such crimes."

"As people of faith, we must continue to pray for all victims, and for healing in all these shattered communities that now extend across the length and breadth of our land," he added.

Law enforcement authorities said Seth Ator, 36, carried out the shooting as he drove along 10 miles of highways in the two communities, spreading panic in a normally calm Saturday afternoon.

The shooting was the second in west Texas in a month. The first occurred in El Paso Aug.3 when a gunman shot and killed 22 people and injured 24 others.

Odessa Police Chief Michael Gerke said the gunman was fired from his trucking job the morning of the shooting, called the FBI tipline and was on the phone with emergency dispatchers as the attack continued.

Bishop Michael J. Sis of San Angelo, Texas, where Odessa and Midland are located, announced that three Masses had been scheduled at diocesan churches in upcoming days to pray for peace and healing from the tragedy, including a Mass Sept. 8 at Sacred Heart Cathedral in San Angelo.

Another Mass was set for Sept. 7 at St. Elizabeth Ann Seton Catholic Church, the parish closest to where the shooting took place.

Bishop Sis offered prayers for those who died and were injured in the incident in a statement following the shooting.

"My prayers are also for the great people of those communities directly impacted by this senseless act of violence, especially the courageous first responder and the local medical teams," he said.

"The Lord is close to the brokenhearted, he saves those whose spirit is crushed," the statement said, quoting Psalm 34.

Bishop Sis committed diocesan parishes to assisting the community in its healing.

"There are no easy answers as to how to end this epidemic of gun violence in our state and in our country. I ask the Lord to enlighten all of our hearts and minds, especially our government leaders, so that we can have the insight and the courage to move from a culture of death to a culture of life," the bishop said.

San Antonio Archbishop Gustavo García-Siller said in a Sept. 1 statement that “these appalling acts cannot become so commonplace that they no longer shock our senses.”

“We need movement forward, not more rhetoric, at this time of crisis,” he said. “Catholics are ready to lead dialogue and activity at this perilous period in our nation’s history.”

Bishops also took to social media to voice concerns after this shooting.

Cardinal Blase J. Cupich of Chicago said in a Sept. 1 tweet: "Prayers alone are not the answer."

"I join my brother bishops in condemning such horrific crimes against humanity and I encourage all people of goodwill to demand action now by our elected leaders," he said.

"May the victims of the Odessa shooting rest in peace, may the injured recover and find comfort in the Lord, and may their families and friends find the strength to support their surviving loved ones," he added.

Bishop Frank J. Dewane of Venice, Florida, chairman of the U.S. bishops' Committee on Domestic Justice and Human Development, also offered prayers for the victims in a Sept. 1 tweet for those who lost their lives "and the many injured during another violent act."