‘We can’t be indifferent’: Locals pray for peace, justice in Ukraine as deadly war continued 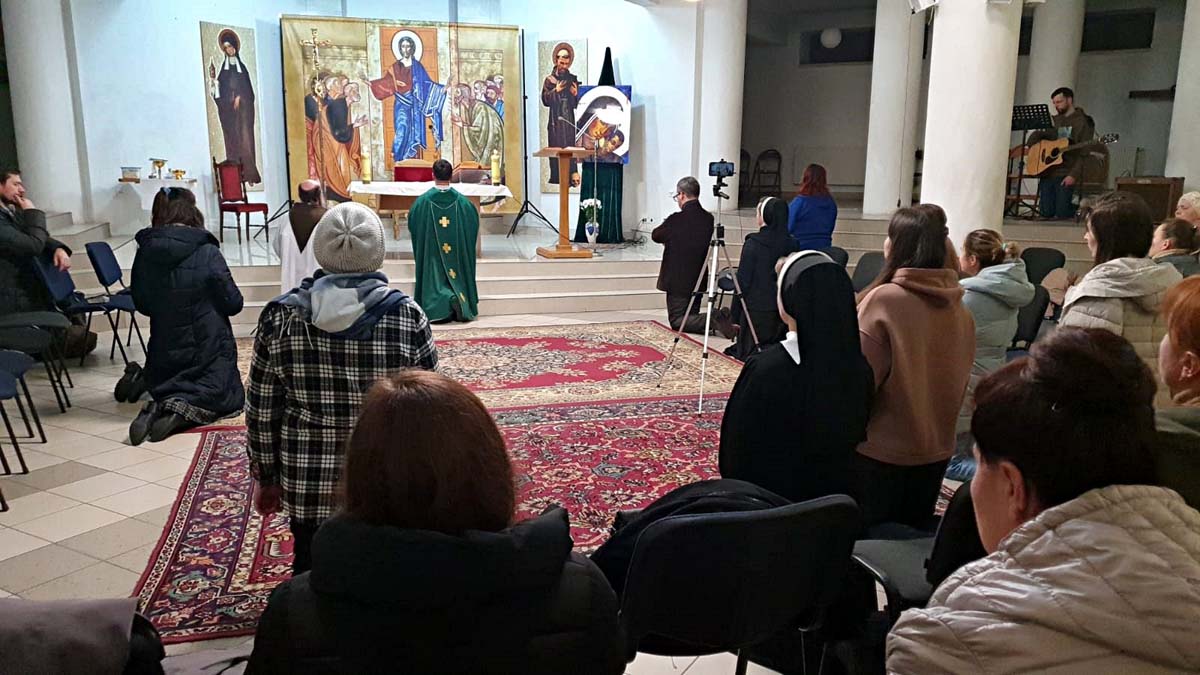 Ukrainians gather for prayer in a Kyiv church basement Feb. 26, as the Russian invasion of their country endured. Daniel Cardinal DiNardo echoed Pope Francis’s call for Catholics worldwide to dedicate Ash Wednesday as a day of fasting and prayer for Ukraine. (CNS photo)

HOUSTON — While Father Mykola Dovzhuk chanted during a Feb. 28 prayer service at “Pokrova” Protection of the Mother of God Ukrainian Catholic Church in Houston, 6,000 miles away in Ukraine, millions of his fellow Ukrainians hunkered down in basements, Metro stations and bomb shelters across the Eastern European country as Russian rockets and missiles rained down amid air raid sirens in the early morning hours.

Ever since Russian military launched its invasion of the eighth most populous European nation on Feb. 24 with bombs, tanks and other weaponry, the north Houston parish began hosting daily prayer services at 7 p.m. to pray for peace and healing, in addition to daily 10 a.m. Divine Liturgies for peace.

As pastor, Father Dovzhuk leads Houston’s only Ukrainian Catholic Church, which is a parish of the sui iuris Byzantine Rite Eastern Catholic church that is in full communion with Pope Francis and the Latin Church.

Ever since Russian aggressions began quickly growing in 2021, Father Dovzhuk and his fellow Ukrainian Catholic clergy and bishops have been calling for a peaceful resolution to the political and humanitarian crisis, which has roiled the region since the conflict between Russia and Ukraine in 2014.

Their repeated calls for change were eventually met with violence when Russian President Vladimir Putin authorized the bloody invasion of Ukraine.

Bomb shelters soon became places of refuge, prayer, and even maternity wards for newborns, as Ukraine’s military fought to repel Russian forces above ground and in the skies.

The United Nations reported March 7 that the violence has caused at least 1,207 civilian casualties, including 406 deaths and 801 injuries. More than 100 children have been injured or killed, according to additional reports. A 43-year-old Ukrainian Orthodox military priest chaplain was reported to have been shot and killed by Russian forces as he was leaving a town in a car. By March 1, many residential areas, schools and even churches, had been shelled and destroyed.

The violent urban warfare forcibly displaced more than 1.7 million Ukrainians into neighboring countries, according to a March 7 United Nations report, a number expected to rise. The mass exodus is the largest refugee crisis since World War II, the report said. Relief officials estimate that there are six million Catholics and 25 million Orthodox in Ukraine, a country of 44 million.

Day of fasting and prayer

Ash Wednesday, March 2 this year, took on an even greater somber tone: Pope Francis had requested to use the day to fast and pray for peace in Ukraine and the world. He appealed “to everyone, believers and nonbelievers alike” to make Ash Wednesday “a day of prayer and fasting for peace.”

In Houston, Daniel Cardinal DiNardo agreed and asked all the clergy and laity of Galveston-Houston to offer penance for peace in Ukraine and around the world.

“Ukraine is being crucified right now,” said Daniel Cardinal DiNardo in his homily Ash Wednesday at the Co-Cathedral of the Sacred Heart in Houston. He was quoting Archbishop Borys Gudziak, Metropolitan Archbishop of Philadelphia for Ukrainians of the United States.

“So many people are becoming refugees. This action is sending shock waves politically and economically,” Cardinal DiNardo said. “Pope Francis has asked us instead of our usual Lenten prayers and fasting, to especially pray and fast for Ukraine. We hope to come to Easter knowing peace.”

“During the Lenten season we take up the cross of penance to unite ourselves to the sufferings of the Lord Jesus, and to share in the burdens of others. May our sacrifices ... throughout the season of Lent help us to grow in holiness and in mercy towards those who suffer,” said Cardinal DiNardo.

In addition to the 800 attending the Co-Cathedral 12:10 p.m. Mass, pastors at parishes across the Archdiocese report thousands are returning to parishes on Ash Wednesday with full attendance even at 6:30 a.m. Masses.

At the Feb. 28 evening prayer service, Father Dovzhuk also encouraged Catholics to commit to fasting and prayer for peace every day. He also welcomed visitors to the parish for Divine Liturgy and to the prayer service for peace.

The vigil included an adaptation of St. John Paul II’s Prayer for Peace, which said: “To You [Jesus] we entrust all families and pray that they may never yield to discouragement and despair, but become heralds of new hope to one another in this challenging time.”

The prayer continued: “May You continue to inspire all of us to oneness of heart and mind, to work generously for the common good, to respect the dignity of every person and the fundamental rights which have their origin in the image and likeness of God impressed upon every human being.”

‘We are united in the body of Christ’

Several parishes in Galveston-Houston joined Father Dovzhuk’s earnest prayers for peace, including St. Joseph Catholic Church near downtown Houston. More than 100 people from the vibrant parish’s diverse communities united for a bilingual Rosary for peace to end the war in Ukraine on Feb. 25.

“People who attended all felt called to draw near to the heart of God in love, prayer, fellowship and in solidarity with people of Ukraine [that] we cannot even see or know,” he said. “We are united in the Body of Christ. When one member suffers, we all suffer. We can’t be indifferent, but as Christians we come together and pray.”

Parishioner Elizabeth Williamson said she contacted Father Perez about hosting the prayer vigil and that he was “absolutely” open to the idea.

“I knew I could not sit idle as a bystander. I felt the Spirit moving my heart towards prayer,” she said, adding that hearing the Hail Mary echo throughout the church was a “heavenly encounter.”

‘With a heart broken,’ pope prays for peace in Ukraine

VATICAN CITY (CNS) — Pope Francis said his heart was “broken” by the war in Ukraine, and he pleaded again, “Silence the weapons!”

“Many times, we prayed that this path would not be taken,” he told people gathered in St. Peter’s Square for the midday recitation of the Angelus prayer Feb. 27. But rather than giving up, he said, “we beg God more intensely.”

With many of the people in the square holding Ukrainian flags, Pope Francis greeted them the way they traditionally greet each other, “Slava Isusu Chrystu,” meaning, “Glory to Jesus Christ.”

Pope Francis has continued to personally express his concern about Russia’s invasion of Ukraine and to appeal for peace. The previous evening, he phoned Ukrainian President Volodymyr Zelenskyy.

The call to Zelenskyy came a day after Pope Francis made the diplomatically unusual gesture of visiting the Russian Embassy to the Holy See himself to express his concern over the war. Usually, a head of state would have an ambassador visit the pope.

VATICAN CITY (CNS) — The flood of support from people inside and outside Ukraine is a source of strength and hope for the people receiving aid and for the Caritas organizations coordinating efforts, said two Caritas directors from Ukraine.

Pallottine Father Vyacheslav Grynevych, director of Caritas-Spes, said the prayers, assistance and offers to help are so important for them “to see that we are not alone in this terrible situation.”

He also urged people to reach out to and spiritually support Ukranians who are living abroad and who are worrying about family members in conflict zones.

Caritas Spes promptly set up a network of volunteers who contacted us and asked how they could be helpful with tears in their eyes. And we tried to involve all of them, as the needs are growing with the escalation of the war," Father Grynevych said March 1. "Dear friends, we are not afraid to wipe tears away from the faces of our brothers and sisters."

Tetiana Stawnychy, president of Caritas Ukraine, said, “I can’t emphasize enough the expressions of solidarity that we see at every corner inside the country; it’s very inspiring.”

With the support of at least 35 other Caritas organizations, the two local charities have been providing essential information, food, water, hygiene kits and safe places for shelter.

Sisters: ‘None of us have left’

Sister Josephine Garrett, CSFN, a Tyler, Texas-based counselor, speaker and Houston native, said her community of the Sisters of the Holy Family of Nazareth has several communities in Ukraine.

“For eight years we have lived in a state of war, and the most recent days of our lives are filled with fear and anxiety. We fear for our country, our families, our future,” the sisters wrote in a Feb. 19 letter. “None of us knows what our tomorrow will look like, whether we will be awakened by an alarm clock or the sound of a siren. But for now, none of us has left, because after all, the people remain here, our people, who need us.”

As the violence continued, the sisters shared in a Feb. 26 report that while two sisters were forced to flee their homes, others stayed “in their places, supporting the people, encouraging them, praying with families, helping to calm children, supporting and courageously helping as they can and where they can.”

In Hniwan’, in western Ukraine, the sisters said there is Eucharistic Adoration in the Chapel for nearly the whole day: “Here we seek, first of all, peace of heart and we pray for those who fight with weapons in their hands.”

Various Catholic agencies are collecting donations to aid with the humanitarian crisis in Ukraine, as people flee to escape Russian bombing and shelling. Here are some places to donate. This list is not exhaustive.

The international Caritas confederation is collecting funds to help Caritas Ukraine. In the United States, that is through Catholic Relief Services. Internationally, you can donate through Caritas.

The Ukrainian Catholic Archeparchy of Philadelphia also has a link to donate.

The Pontifical Mission Societies is collecting funds support the priests, religious sisters and brothers, and lay pastoral leaders who are reaching out to those who are suffering and in need.

The Knights of Columbus launched the Ukraine Solidarity Fund, and donations can be made at kofc.org/secure/en/donate/ukraine.html. On Feb. 25, the Knights of Columbus announced a commitment of $1 million for immediate distribution to support Ukrainian refugees and will match all funds raised up to an additional $500,000. The relief funding will be used to provide shelter, food, medical supplies, clothing and religious goods, as well as other humanitarian needs as identified, both directly in Ukraine and through refugee sites in Poland.

Donations can also be made to Jesuit Refugee Service at www.jrsusa.org to support the agency's work in Europe "to accompany, serve, and advocate for those forced to flee from war and conflict."

The Salesians also are accepting donations to help refugees.