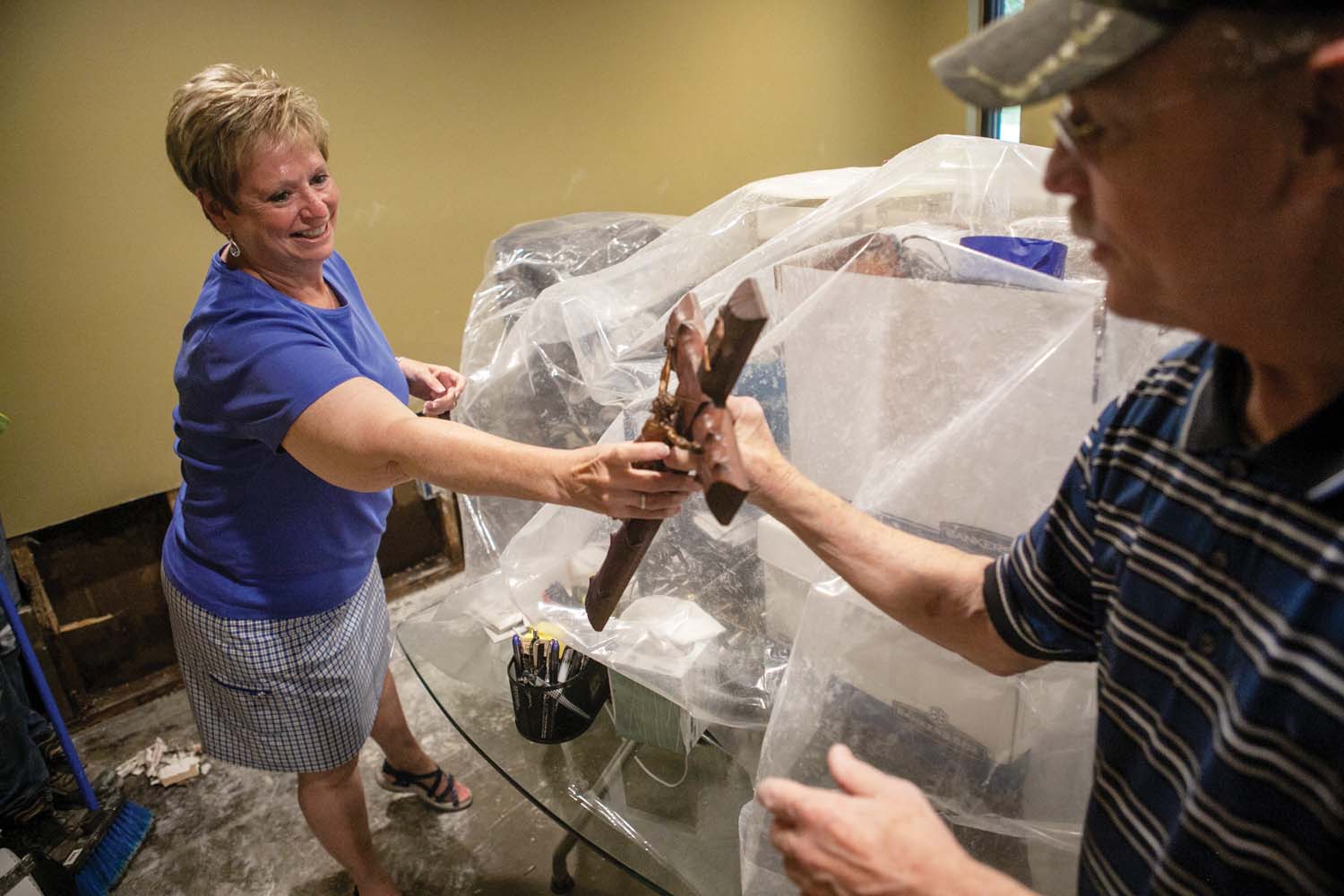 Father Richard Barker, pastor of St. Philip the Apostle Catholic Church in Huffman, takes his crucifix from Lynette Zaunbrecher, confirmation and sacramental coordinator at the parish Sept. 23. Imelda briefly suspended parish ministries which quickly resumed the next weekend. Below, kneelers and chairs sit atop pews at St. Philip the Apostle Catholic Church after Tropical Storm Imelda pushed eight inches of water into the Huffman church. Masses and faith formation programs have been relocated to a nearby church in Atascocita while renovations and repairs take place. (Photos by Father Richard Barker and James Ramos/Herald.)

HUFFMAN — The damp odor in his now-empty office. The din of dozens of ventilation fans blasting air at max speed. The slashing sound of saws tearing apart drywall. The dark, murky water still standing on roadsides. The ache of again not having a physical home to a pained, and perhaps tired, spiritual community.

“Every single thing brings out a memory of Harvey,” said Father Richard Barker, pastor of St. Philip the Apostle Catholic Church in Huffman.

When Tropical Storm Imelda dumped some more than two feet of rain on east Montgomery County Sept. 19, several feet of floodwater from the East Fork of the San Jacinto River and Cedar Bayou rushed through Huffman, Dayton and Crosby. These entire communities became an “ocean of water,” Father Barker said.

The floodwaters didn’t care Hurricane Harvey had just flooded the parish, a community of more than 650 families, two years ago. Imelda brought six to eight inches of water into the parish buildings while drenching the entire parish campus with several feet of water. But because of Harvey, parish leaders knew what to do.

The day after the storm, on Sept. 20, a small crew of parishioners — those who could navigate the high waters that still choked Huffman, some 50 high-water rescues still took place nearby — trekked to the church to save what they could. They elevated statues, kneelers and furniture, emptying cabinets of supplies, books, and more to spare anything from the risk of being reached by more water if it were to return. 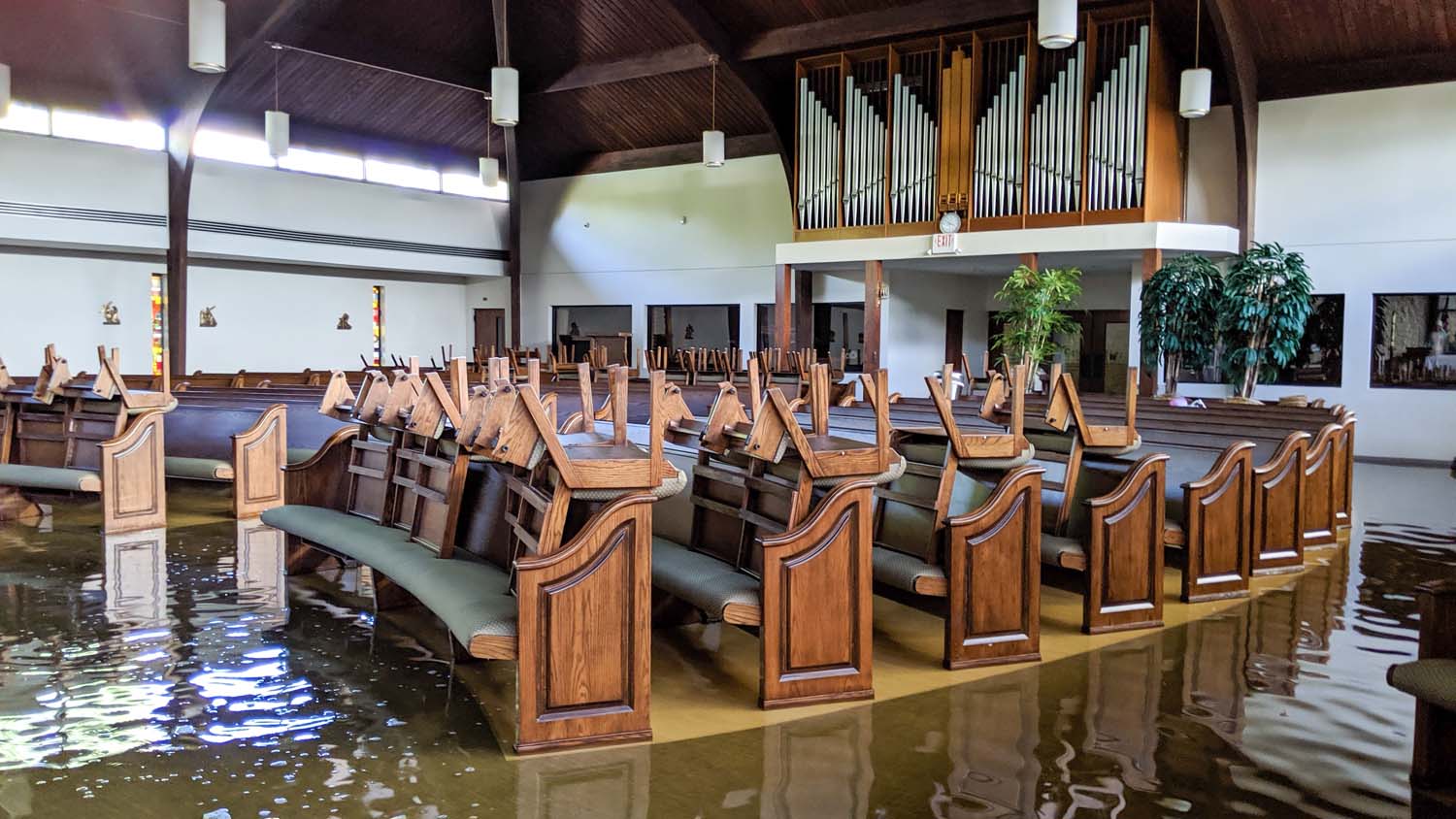 50 parishioners came the next day to continue the renovation process themselves before remediation companies arrived. After Harvey, four feet of floodwaters stayed inside the church for three days, wreaking havoc by crawling up high into the walls of buildings, deeply contaminating everything on the parish campus.

“We can’t get away from it,” said Lynette Zaunbrecher, confirmation and sacramental coordinator at the parish.

This time they pushed any remaining floodwaters out of the buildings. Floodwaters snaked into the elevated space beneath the altar, a wooden structure that was already buckling from the moisture.

They pulled up the carpets, scrubbed down the new wooden pews installed 13 months ago, desperate to save the parish’s major expenses, like the sound system. The organ and grand piano were all spared, but the community again was splintered by the floodwaters.

Walking around the church sanctuary, Father Barker and Zaunbrecher surveyed a strange scene. The podiums, votive candle holders, shelves and credence tables were all crammed next to the altar. Pews were elevated off the ground to dry out. Their shoes stuck to the floors as they crossed the sanctuary. Suddenly, hot air moved through plastic tubing that coursed throughout the parish, working to “bake” the campus and clear the space of airborne contaminants.

Mass and faith formation programs were canceled that weekend but resumed Sept. 28. A church in nearby Atascocita, just across the FM 1960 bridge over Lake Houston, opened a chapel space to house the displaced congregation.

When Imelda came, the parish was in the middle of a campaign to evangelize to neighboring communities. They shared the message that the doors were open and the parish was ready to share the faith and serve where needed.

And it was working. New families were registering, parishioners who scattered after Harvey had returned, youth and adult faith formation programs were growing and even altar server trainings were set to begin the next week.

“To go through this a second time is... cruel,” said Zaunbrecher.

Now parish officials said there is no expected timeline to return to the church campus. But a priority effort to renovate and reopen the parish office back on the church campus as soon as possible was underway. After Harvey, parish and ministry leaders spread out across the city in spaces opened to them. While thankful for the chance to resume ministry, efforts were hampered by distance and lack of face-to-face communications.

Harvey taught the parish that the biggest loss is when ministries are revived but “suddenly the Church doesn’t exist anymore,” with parishioners scattered.

“The ministries are the first thing to suffer permanently. Then it takes such a long time to rebuild ministries” like faith formation and liturgical ministries.

While there are “solid” plans to continue youth faith formation programs, “the Liturgy now has gone with the water,” he said. “ You can’t keep a full-blown liturgical team in place in a temporary location when Mass is coming out of a backpack or a piece of luggage.”

In the aftermath of Imelda, Father Barker remained focused on empowering the parish ministry leaders. Still, even after knowing what to do after a storm, leading a community split by floodwater is no easy task.

Many parishioners were affected by Imelda, and Father Barker lost his own car to the flood. He said he continues to “lead in God strongly,” no matter how tired, or flooded his parish may be.

Right before demolition entered full swing, Father Barker searched his office, now a tall, jumbled pile of boxes, books and paperwork sitting atop his desk in the middle of the barren space covered in industrial plastic wrap, for the crucifix that had hung on his office wall.

Zaunbrecher found it first. She lifted the plastic covering, reaching over a box and gingerly picked up the large crucifix and handed it to Father Barker. Since it was high, it was safe from Imelda’s floodwaters. The dark wooden cross, with angled etchings on all four ends and knot-like bumps of a tree branch, featured a bronze corpus of Jesus Christ, whose head tilted with eyes closed as if He was sighing.

Father Barker clutched the crucifix close to his chest, at times tucking it under his chin as if to rest on it, seemingly sighing with Christ. With the crucifix, he went to another room and grabbed the parish blueprints. Before leaving the parish for the afternoon, he glanced once more to his office that Imelda, just like Harvey, had changed for him.

The waters had come again, but Father Barker knew that God would make a way back home, just as God did with Moses and the Israelites. But for now, he carried his cross with him outside of the church he leads.

Vigil Masses are being celebrated on Saturdays at 4 p.m. in the AUMC Wesley Sanctuary until the parish is able to return to its original campus. Kindergarten through fifth-grade CCE classes are held on Saturday after Vigil Mass from 5 to 6 p.m. in the Sunday School classrooms. Sixth through eighth-grade CCE classes are held at 7 to 8:30 p.m. on Wednesdays in the AUMC’s Adult Education classrooms.

For more information, call the parish office (which has re-opened on church grounds at 2308 Third St. in Huffman from 9 a.m. to 1 p.m. on Monday through Friday) at 281-324-1478, or visit stphiliphuffmantx.org online.