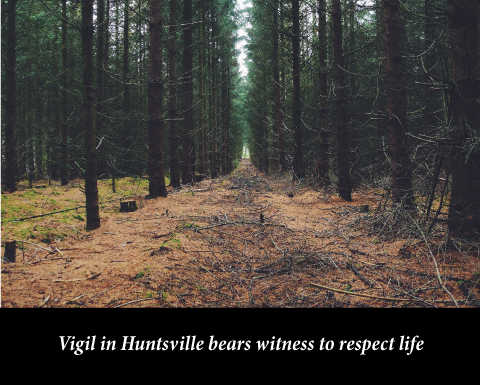 HUNTSVILLE — On Wednesday, Dec. 7, John Battaglia is scheduled to die by lethal injection in Huntsville. Battaglia’s execution will be the eighth conducted by the State of Texas in 2016.

The Archdiocesan Offices of Pro-Life Activities and Social Concerns will host a gathering in Huntsville that afternoon to bear witness to a consistent ethic of life from conception to natural death. The event is set for 5 p.m. at St. Thomas the Apostle Catholic Church, located at 323 16th St.

Open to the public, the gathering will be a brief prayer service followed by a procession to the prison grounds for an execution vigil in support of all human life.

Julie Fritsch, director of the Archdiocesan Office of Prolife Activities, said there will be a 5- to 10-minute brief talk and prayer at the site, followed by a prayerful procession to the Walls Unit at the prison.

“The (lethal injection) execution of John Battaglia is currently scheduled to begin at 6 p.m. that evening and will usually be finished within 30 minutes,” she said. “At the prison, assuming the execution takes place and is not stayed, we will have a reflections from several clergy.”
Fritsch said there are many threats to a consistent ethic of life in society and in favor of a ‘Culture of Death,’ including a growing trend toward legalizing euthanasia as well as a general eroding of the dignity of the human person, whether or not a “prolife” issue is involved.

“Too often, those who count themselves ‘pro-life’ are very focused on abortion, but perhaps fail to recognize other threats to the true dignity of every human person — even when, or perhaps especially where, that person has committed grievous offenses against society,” she said.
John J. Fahy, assistant principal for Student Affairs at Strake Jesuit College Preparatory, has spent several years coordinating anti-capital-punishment action at Strake Jesuit, first as a theology teacher, and now in his current position. From his perspective, standing up in opposition to Texas’ systems of capital punishment is important because of several reasons, first of which is the clear opinion of Pope Francis and the United States Conference of Catholic Bishops that the death penalty should be reserved for certain limited cases. It is obvious to him that Texas’ use far exceeds that.

“The continued existence of frequent, unneeded executions is a plain violation of human dignity,” he said. “Moreover, capital punishment in Texas is particularly marked by a white supremacist history, and continues to show a bias against ethnic and racial minorities, against the poor, and against the mentally ill and mentally challenged. These injustices deserve our opposition.”

Fahy said that, while the pro-life message is clearly articulated in Texas’ culture and enacted into law in many ways, opposition to capital punishment is far behind opposition to abortion.

“Many Texans seem to take a cavalier, or even joyful attitude at prisoner abuse or capital punishment,” he said. “Without wanting to falsely equate all life issues, I still think that we would be wise as a Church and a culture to bring those two advocacies together more regularly. Texans are a naturally pro-life people, and we need to create a culture of life that really does extend to all people, including criminals, prisoners and death-row inmates.”

Fahy said he has brought 100 or more students to Huntsville to stand vigil for those who die in the execution, for victims of violent crime, for the families of victims and perpetrators alike. His students have had personal interactions with the families of those to be executed, with other abolitionist activists, and with prison guards — all of these experiences have formed a greater appreciation for the gravity of capital punishment, even with students who remain pro-death penalty.

“There is something remarkable about being there when an execution happens; watching the procedures outside the prison; seeing the guards stand at their posts; hearing the abolitionists pray and protest; seeing family members grieve and tell stories; remembering and praying together for the victims of crime,” he said. “It feels much more real than any classroom conversation, and helps develop a sense of empathy and gravity that are needed for the moral and political conversation about death row.”

The death penalty was reinstated in 1974 and the first execution following the reinstatement took place in 1976. Executions increased steadily until peaking around 2000. Since then, there has been a fairly steady decline in the number of executions in Texas with an even greater decline in the number of individuals receiving the death sentence. This is partly due to a change in the law in 2005 allowing Texas juries to impose a sentence of “life without the possibility of parole.” Previously, juries were only given the option of “death” OR “life with the possibility of parole after 40 years.”

Although the death penalty is declining in Texas, it is still legal in 32 states in the nation. Moreover, while Texas has executed the largest number of persons (by far with just under 540 executions), Oklahoma had the highest number of executions per capita (as of 2010). On Nov. 8, California, Nebraska and Oklahoma voted to maintain the death penalty.

Fritsch said the Catholic Church traditionally has not absolutely prohibited recourse to the death penalty (see CCC 2267), especially where there was no way to adequately protect society from the offender — in which case it could be seen as a form of self-defense.

“Recourse to the death penalty for purposes of retribution, therefore, is not legitimate and is inconsistent with the human dignity of the offender,” Fritsch said. “However, as St. John Paul II noted in Evangelium Vitae, in the modern world, the need for recourse to the death penalty as a means to protect society is almost nonexistent. Therefore, it would be the rare case in which the execution of an offender would be considered morally justified by the Church.”

Fahy said the upcoming event may get more attention now that the entire Archdiocese is working together.

“A typical vigil I’ve attended outside the Walls Unit usually has 10 people or fewer, but I could imagine dozens making this trip,” he said. “That show of solidarity will be inspirational to my students, and to other East Texas Catholics. I hope this might jump start a faith-filled conversation about the death penalty in our communities.”