Vatican: Pope to visit Indigenous in Canada in late July 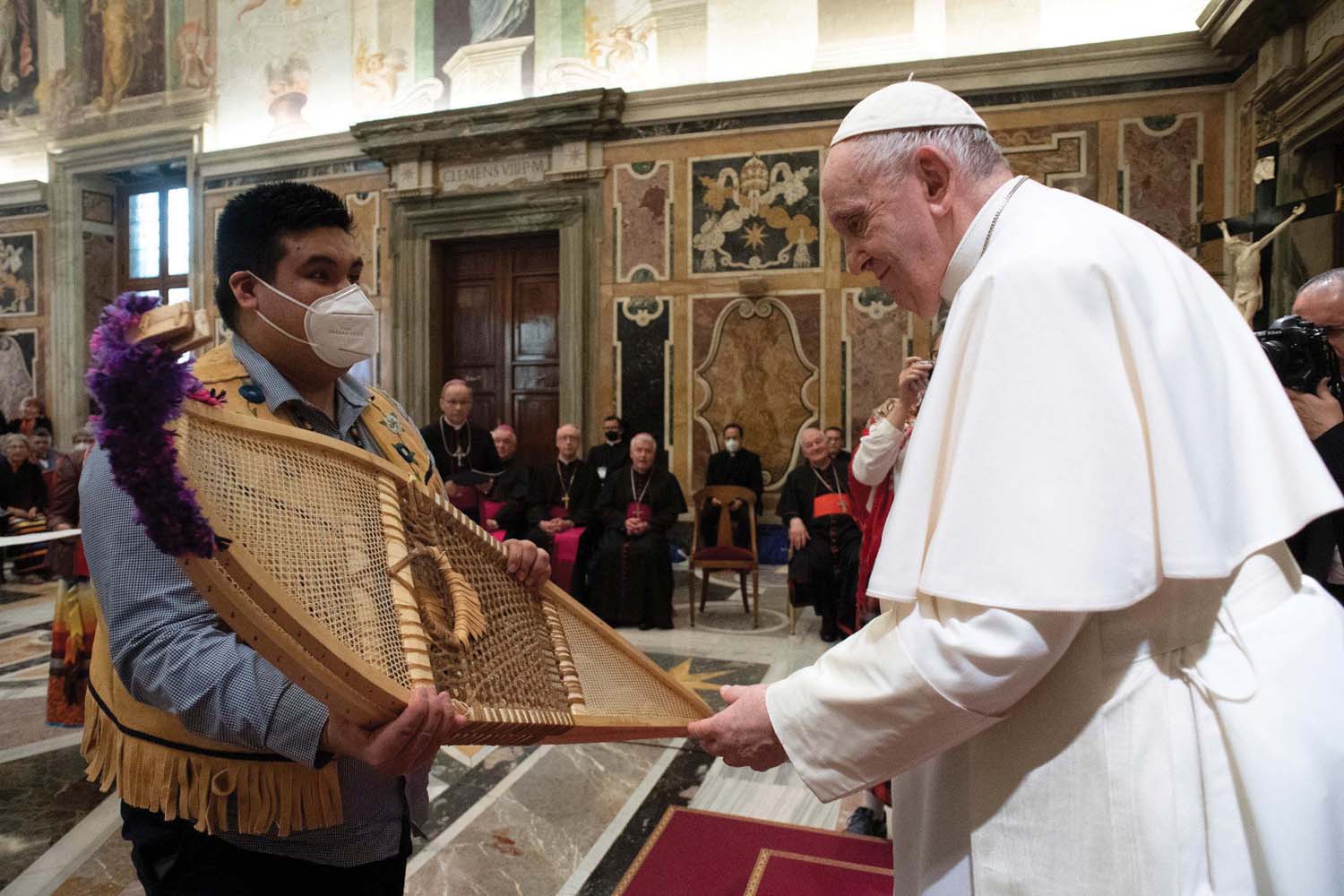 Adrian Gunner, representing the Assembly of First Nations, presents Pope Francis with snowshoes made of black ash with caribou sinew and artificial sinew in the Vatican’s Clementine Hall on April 1. The pope will meet members of Canada’s Indigenous communities in late July, visiting the cities of Edmonton, Quebec and Iqaluit in Nunavut, the country’s most northern region. (CNS photo)

VATICAN CITY (CNS) — Pope Francis will meet members of Canada’s Indigenous communities in late July, visiting the cities of Edmonton, Quebec and Iqaluit in Nunavut, the country’s most northern region.

“Accepting the invitation of the civil and ecclesiastical authorities and the Indigenous communities,” the pope will be in Canada July 24 to 29, returning to Rome July 30, the Vatican announced May 13. The Vatican said a detailed program would be released later.

“The pope’s visit will provide a unique opportunity for him, once again, to listen and dialogue with Indigenous peoples, to express his heartfelt closeness and to address the impact of colonization and the participation of the Catholic Church in the operation of residential schools throughout Canada,” the bishops of Canada wrote on a website — papalvisit.ca — launched for the visit.

The papal visit, the bishops said, would be “a significant step on the road to truth, understanding and healing.”

Pope Francis had promised to visit Canada during a meeting on April 1 with representatives of Canada’s Métis National Council, Inuit Tapiriit Kanatami and Assembly of First Nations — three groups he also had met with individually. A delegation from the Manitoba Métis Federation visited the Vatican separately on April 21 and also met with the pope.

Many of the representatives in the groups were survivors of residential schools — boarding schools the government established to educate and forcefully assimilate Indigenous children. Many of the schools were run by Catholic religious orders or dioceses.

While survivors shared with the pope their experiences of being torn from their families and often physically or sexually abused at the schools, the elected leaders of the groups asked Pope Francis to travel to Canada to formally apologize for the Catholic Church’s role in suppressing their languages, cultures and spiritualities and, particularly, for the Church’s role in running many of the residential schools.

“For the deplorable conduct of those members of the Catholic Church,” the pope told the representatives in April, “I ask for God’s forgiveness, and I want to say to you with all my heart: I am very sorry.”
He also had told them he would like to join them in July for their annual celebration of the feast of St. Anne, Jesus’s grandmother. A major pilgrimage is held each year at the Shrine of St. Anne, on Lac Ste. Anne, not far from Edmonton.

At a news conference broadcast online from Edmonton, Archbishop Richard Smith, the Canadian bishops’ coordinator of the visit, said the pope’s “advanced age” and “the fact that he’s severely limited in his mobility” meant that the Vatican insisted on organizing the visit to only a few cities and using them as hubs to visit Indigenous groups and “meaningful sites,” including the site of at least one former residential school and, probably, Lac St. Anne.

The Vatican, he said, was “very, very clear: When he comes to a country, he can’t get around by helicopter, he can’t be in a car for more than an hour, he cannot be in a different place every night.”
“We fully expect that the pope will reiterate the apology that he did give in Rome,” the archbishop said. “He understands, as we all do, the strong connection of Indigenous peoples to their land, the land for them culturally, spiritually, historically, in terms of their customs.”

Archbishop Smith said the trip is being planned with representatives of the Indigenous communities, and “it is clearly a priority for all of us that whatever takes place in whatever venue will feature as a priority, as a first concern, Indigenous culture, Indigenous spirituality, Indigenous ways.”

The bishops’ website provides a few notes about the three cities that were chosen.

Edmonton, it said, is home to the second-largest number of Indigenous people living in urban centers in Canada, and “25 residential schools were located in Alberta, the most of any province or territory in Canada.”

“Iqaluit, with a population of 8,000 people, is home to the largest number of Inuit in Canada — approximately 3,900,” it said. “Pope Francis was personally invited by the Inuit delegates to visit the North.” The pope did, however, insist he would not go to the region in winter.

Quebec, the website said, would serve as the “eastern hub for those who may wish to travel to see Pope Francis, especially Indigenous peoples” of Canada’s eastern territories. “The region is also home to (the Shrine of) Ste. Anne-de-Beaupré, one of the oldest and most popular pilgrimage sites in North America, drawing Indigenous peoples and others from throughout Canada and around the world each year.

Canadian Prime Minister Justin Trudeau said in a statement on May 13 that he welcomed the announcement of the pope’s visit, something that would not have been possible “without the bravery and determination of the survivors, Indigenous leaders and youth who shared their stories” with him in April.

During a meeting at the Vatican in 2017, Trudeau personally asked Pope Francis to help Canadians “move forward on a real reconciliation” with the country’s Indigenous people by visiting Canada to issue an apology on behalf of the Catholic Church for its role in harming their communities.