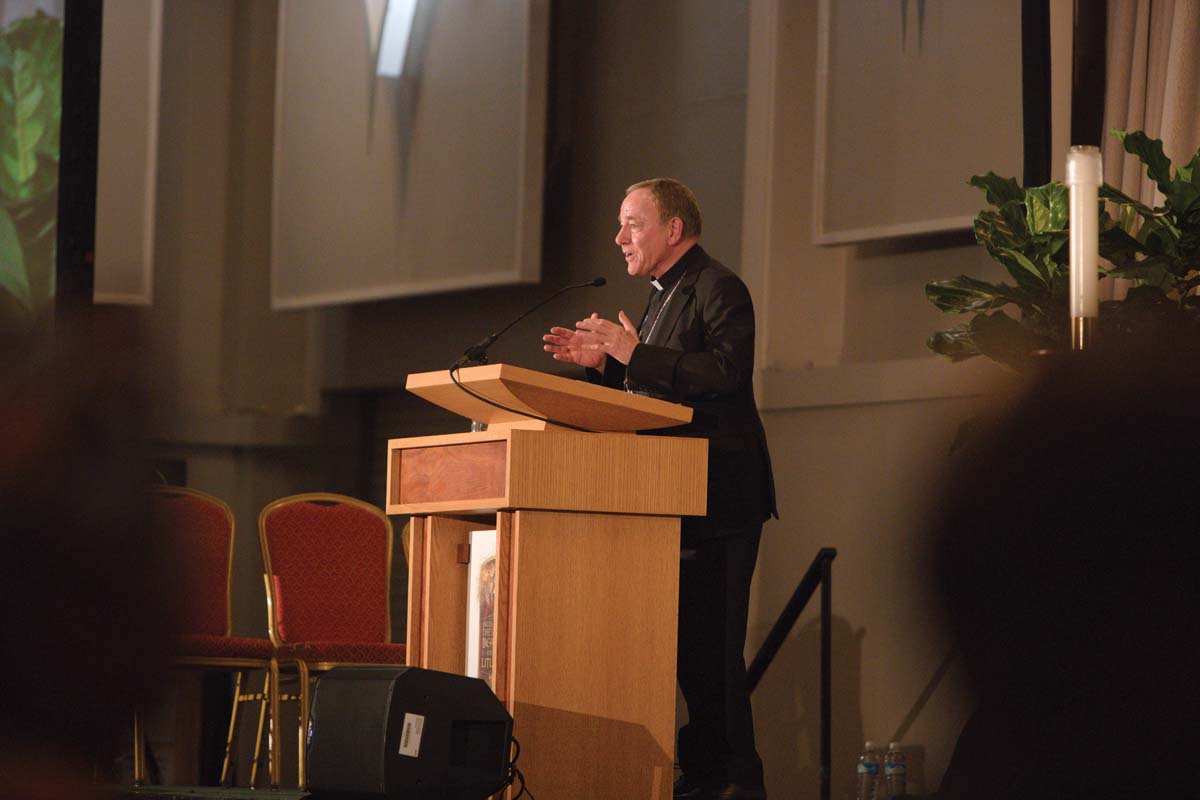 “For how many Catholics is their liturgical experience more moving than watching Netflix, visiting an art gallery, or going to look at cinema?” said Archbishop Miller, who served as University of St. Thomas president from 1997 to 2004.

His address opened the conference, setting a tone of honest conversation and dialog between the more than 650 parochial, ministerial and leaders attending from an estimated 69 dioceses.

“What is beauty? We look to God,” said Archbishop Miller. “We look to the face of Jesus Christ.”

“The road to faith can first, I think for some, be found in an experience of beauty,” he continued. “This is one of the reasons why we have to be so attentive to the understanding of beauty in our public worship, in our Liturgy. That beautiful Liturgy has a power to attract and to draw, and there are certainly wonderful stories among great people about the power of beauty, of liturgical beauty, as a moment of conversion.”

“It is sacred. Jesus Christ, the high priest of the good things to come, the mediator of the new covenant established in His blood, did not bring the sacred dimension of worship to an end.”

Archbishop Miller cautioned the use of the phrase: “our Liturgy.” He said, “It is our Liturgy, but that can give us a false sense of possession. The Liturgy reflects the beauty and splendor of the Paschal mystery made present.”

But loving the beauty of Liturgy isn’t about being a “liturgical connoisseur” who’s “absorbed” in the externals, he said. Beauty, in that case, is unconcerned with the “truths of the faith.” Beauty and harmony of all exterior actions and signs must be conducive to adoration and the worshippers’ union with God, he continued.

“I’m not saying that’s the only thing,” he said. “But they must be conducive to our union with God,” which includes the music, the singing, the periods of silence, the manner of proclaiming the word of God, the way of praying, the gestures used, the vestments, the sacred vessels, the church building itself, the furnishings, he said.

“All of these elements together constitute a true liturgical symphony of beauty, one that is appropriate to the awe-inspiring nature of the Liturgy,” he said.

Reflecting on early popes’ teachings on Liturgy, Archbishop Miller also discussed the role of sacred art, architecture and music and their inculturation of the Liturgy in local churches throughout the world. He encouraged the attendees to be “heralds” or “missionaries of beauty in the sacred Liturgy.”

Daniel Cardinal DiNardo, whose appearance was brief due to his attendance at World Youth Day in Panama the next day, presided over vespers prior to Archbishop Miller’s keynote.

“A thing is not beautiful because it is loved,” Cardinal DiNardo said, standing adjacent to two reproductions of the mosaics of the Sacred Heart of Jesus and Ave Maria. “It is loved because it’s beautiful.”

Cardinal DiNardo recalled a memorable experience of worship that he encountered as a first-year student in Rome. In a Good Friday Liturgy in the Russian Church in Rome, he attended an evening service that remembered the burial of Christ.

He said the lengthy service was “most expressively beautiful,” a mixture of “architecture to word, to song, to voice, to objects” that he had experienced in a very distinctive way, considering it wasn’t his own tradition. The incense, the chanting and the voices all climaxed as leaders incensed the plaschanitsa, similar to an icon of the dead Christ, with roses and lemon flowers, he said.

“It was just an incredible sense of scent, of smell, and the vesture and the beauty of the icons and all were overpowering and the choir singing with us trying to hum along was overpowering,” Cardinal DiNardo said.

Then an “extraordinary” moment of beauty followed, he said. Worshippers gathered around and began “the most magnificent, exotic chant” echoing Ezekiel’s vision of the dry bones, asking: “Can these bones live?”

Sister Maria Goretti T. Nguyen, OP, associate director with the Office of Evangelization and Catechesis of the Archdiocese, said attending the conference meant “a great deal” to her, as she is also the music director for her community, the Dominican Sisters of Mary Immaculate Province.

“I become more aware of the space and building in which we have the liturgical celebrations, that it should have in these aspects: eschatology, cosmology and doxology,” she said.

The conference also marked the end of local priest’s leadership role with the conference. Father James Burkart, pastor of Christ the Good Shepherd Catholic Church in Spring, ended serving a five-year term as president of the SWLC’s board of directors. Father Burkhart remains the chair of the Archdiocesan Liturgical Commission.

The next SWLC will he held in Tucson, Arizona in 2020.