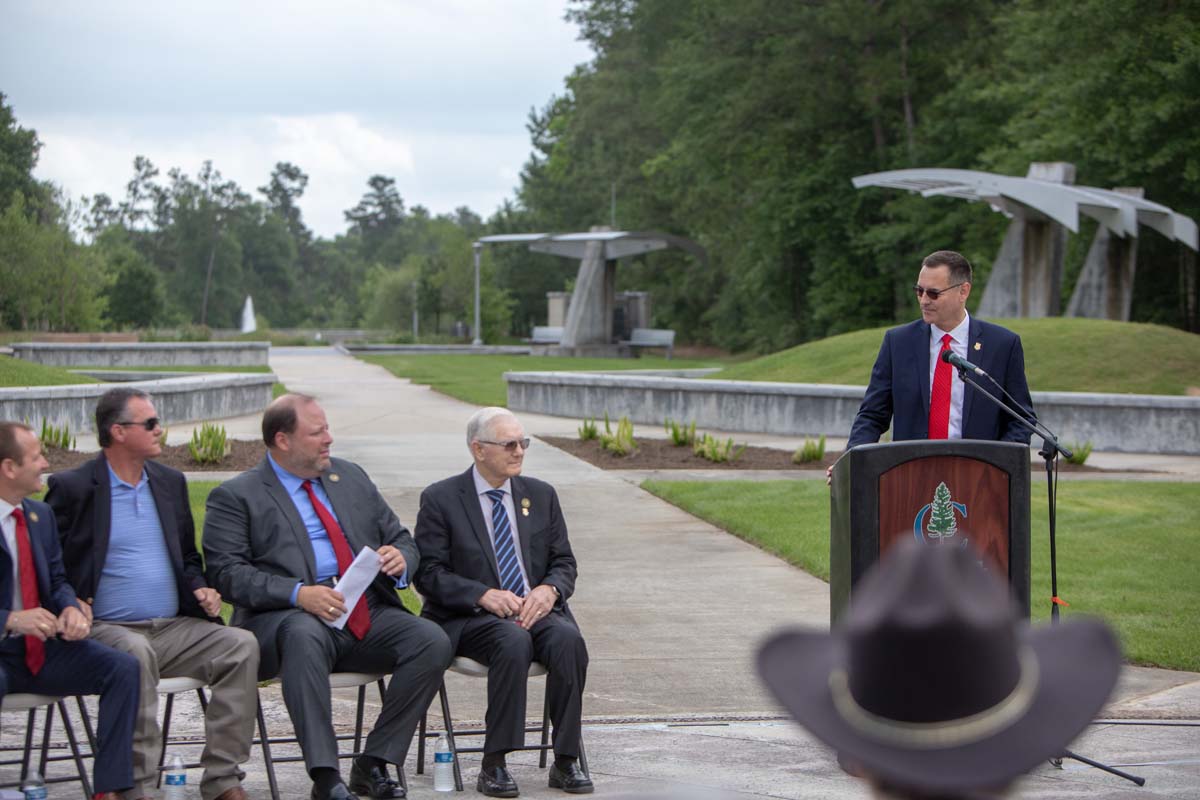 University of St. Thomas President Richard Ludwick speak during a press conference in Conroe, April 29, when he announced the university's intent to establish a campus in Conroe. Photo by James Ramos/Herald.

According to a statement from the university, the campus is proposed to include a nursing school, a chapel, and academic and administration buildings.

Conroe City Councilman Jody Czajkoski reached out to Ludwick with the idea of bringing a Catholic university to Conroe, a conversation which sparked the entire effort.

Czajkoski said the presence of a Catholic university “is going to change the culture and the groundwork” of any community, especially one like Conroe, which has been billed as one of the fastest growing cities in the nation. The Conroe City Council, with Mayor Powell, also designated April 29 as University of St. Thomas Day in Conroe.

UST Dean of Nursing Poldi Tschirch said she believed the north Houston community was interested in the vision of the university.

“Our core values of discipline, goodness, knowledge inform the nursing program,” she said. “We’re focused on holistic nursing, care of the whole person and everyone in the community is drawn to that.”

The nursing program will offer a bachelor’s degree in nursing, as well as a new graduate level degree, she said. The school said it plans to begin offering an accelerated 12-month bachelor of science in nursing degree, a program consisting of online, in-classroom and clinical rotations.
The nursing program is expected to open in fall of 2020 at the former Conroe Police headquarters, adjacent to Sacred Heart Catholic Church in Conroe.

This will be the temporary home for UST in Conroe as it explores possible locations in the area. Ludwick unveiled a proposed artist rendering of UST’s Conroe campus, centered around the existing Deison Technology Park, that featured a host of buildings, a baseball diamond, track and soccer field.

Later that day, the university hosted an awareness event at Sacred Heart, where Father Philip Wilhite is pastor.

“We are very glad that (UST) is coming to Conroe,” he said. “And we’re looking forward to not just bringing the nursing and the business but some day being able to have more of the choices, especially the theology classes.”

Father Wilhite embraced the opportunity for his parishioners and the entire north Houston community to grow in their faith by attending a Catholic university. He said he sees a ripple effect moving outward from UST, especially for those who work in outreach ministries in parishes.

“Being able to have the university opportunity here would help the Catholic families grow in their knowledge of the faith, the living of that, as well as influence the community around us,” he said.

Ludwick said he looks forward to exploring the future with Conroe.

“As a point of evangelization we hope that everything UST does helps bring our message and the mission of the university which is essentially the Christian message of love for the other to life and so certainly Conroe will be a way of bringing that message to life,” Ludwick said. “The New Evangelization is something that, in some ways, is new in the way that people see it, and in some regards, Conroe represents a new outreach by the university.”