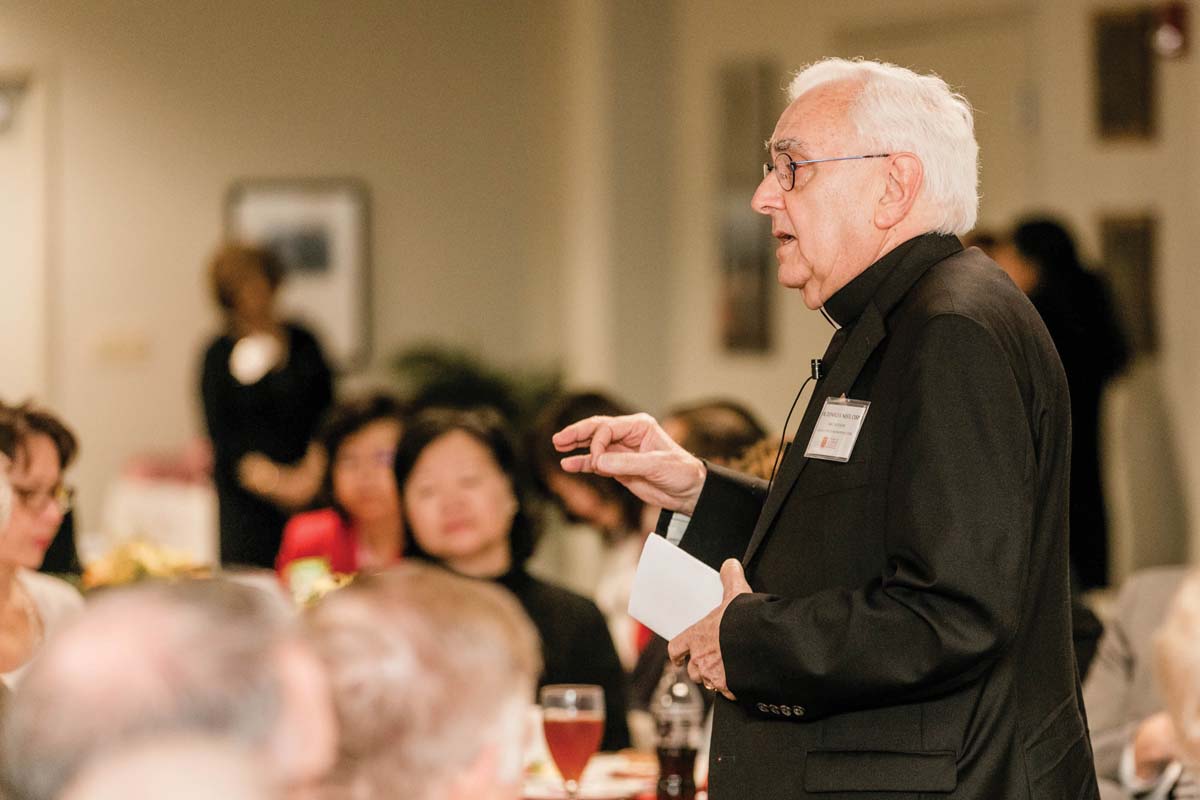 HOUSTON — Beginning the morning discussing “a way of life in the light of faith,” The University of St. Thomas (UST) Donald S. Nesti, CSSp, Center for Faith and Culture (CFC) celebrated 25 years with a breakfast on Feb. 27 at the UST Campus.

The new director of the center, Father Binh Quach, CSSp, welcomed everyone with the singing of “Amazing Grace” by master student of Sacred Music Vawn Stearnes.

Attendees were from different parts of Houston, different ethnic groups and different religious paths. Groups included offices in the Archdiocese of Galveston-Houston, the Dialogue Institute of the Southwest (Turkish Muslims), the Focolare Movement, the Communion and Liberation Movement, the Institute for Spirituality and Health, the Vietnamese Dominican Sisters, the Spiritan China Education Group and many more. Also represented were professors and leaders from UST, the CFC Advisory Board and alumni of the Master of Arts in Faith and Culture (MAFC) program, which flows from the CFC.

“The participants of the Opening Breakfast in some ways symbolize the concept of the ‘people of God’ where we are welcomed and invited to share God’s unconditional love and mercy,” Father Quach said. “We need one another to be a community of partnership for the good, the beauty and the truth of love.”

Father Donald Nesti, CSSp, founder and namesake of the center, gave a brief summary during the breakfast of how he founded the center and the hope he has for it moving forward.

“The Center is truly an act of the grace of God,” Father Nesti said. “We invite anyone who wants to come to the table to discuss our way of life. Every academic program and movement is in search of meaning and questions of meaning is what Catholics do best.” Father Quach then shared his path to the CFC. Escaping from Vietnam when he was 16 years old, Father Quach has lived and worked all over the world including Houston, Taiwan and China. He has returned to the U.S. now after being away for 14 years.

“I was really in love with the mission of the center,” he said. “I want to continue to challenge myself and the community to deal with the basic problems of life together and through dialogue.”

With the mission of bringing the Catholic voice to the ongoing conversation about the meaning of life, liberty and pursuit of happiness held in common as Americans, the center seeks to understand and impact in a meaningful way the relationship between and among the many facets of the American way of life in relation to God’s ongoing, loving encounter with humanity. The center educates faith-full citizens to be artisans of dialogue and proclamation in articulating a God-centered vision of the world and how that vision strengthens the institutions that govern us as a people.

Also in attendance was colleague and friend of Father Nesti, Father Italo Dell’Oro, CRS, vicar for clergy and director of the Secretariat for Clergy Formation and Chaplaincy Services at the Archdiocese.

“It was great to see several people with whom I have interacted over the years connected through Father Nesti and the center,” Father Italo said. “I found interesting the continuity between Father Nesti’s summary of the beginning and development of the center, and Father Bihn’s overview of his vision to grow, which include the evident and relevant diversity of Houston.”

Father Dell’Oro said the overall purpose of the center, reflected in its name “faith and culture,” has always been part of his personal reflection.

“It is a crucial concern from the perspective of ministry in the Archdiocese and, more especially, for my ministry with the presbyterate itself,” Father Italo said. “We have priests who come from a varied number of countries, who share the same faith albeit in different cultures and who are now called to minister in yet another cultural context.”

Father Dell’Oro has collaborated with the center for an activity during the Year Celebrating Consecrating Life in 2015 and through the Office of Ecumenism and Interreligious Dialogue, which is a department of his secretariat.

“I am open to any of their own initiatives and ready to participate in whichever way it is possible,” Father Italo said. “We are fortunate to live in Houston at this time, as we are somehow part of God’s lab where we cooperate with Him in building a new face of the Church — a multicultural one, indeed.”

Understanding the value of multicultural Houston and partnerships with the Archdiocese, Richard Ludwick, president of UST, spoke at the breakfast about how the vision for the university and that of the center are aligned.

“We engage the world through dialogue and encounter,” Ludwick said. “We are all on this journey in the discovery of truth through faith and reason. Through Jesus, we have the privilege and responsibility to encounter all in love and joint understanding. As the center flourishes, so does the university.”

Two Master of Arts in Faith and Culture alumna, Theresa Price and Wendy Millhouse, spoke during the breakfast about their journey to the center and the fulfillment they gained. Price shared how her practicum led her to Generation One, a program in the Third Ward of Houston, and Millhouse shared how the MAFC program fulfilled a yearning she had for a deeper understanding of life and its intricacies.

Millhouse commented on how she loved the cohort experience of the MAFC.

“At any time, I can pick up the phone or drop a note to one of my cohort members and pick up where we left off,” Millhouse said. “At the breakfast, to have everyone in the same space, smiling and visiting was like coming back home.”
Her experiences with the center led her to discover the crisis of human trafficking in the Houston area. Millhouse is a part of Amistad Houston, whose objective is to educate communities on human trafficking. As part of Millhouse’s degree required practicum, she focused on rewriting the highly academic materials provided by the United States Conference of Catholic Bishops (USCCB) to an easier reading level.

Partnering with the USCCB, Millhouse and other volunteers developed a workshop on human trafficking for both adults and youth, and currently provide training during these workshops.

Millhouse’s day job is as a coordinator of talent management activities for Archrock, a natural gas compression services company. She provides employees and managers with the tools needed for career development and professional growth.

“My first masters degree in Organizational Leadership and Sociology helped me with the business side, however, there was something missing — the people side,” Millhouse said. “How do we balance business objectives with the humanity element? Most importantly, we need to meet others where they are. I use this every day in my work. Sometimes a person might need a good listener and, quite possibly, encouragement through dialogue as they begin to see opportunities. I am satisfied that my education through the MAFC has helped me to be a much better person.”

Closing the breakfast with a prayer was Deacon Randy Graham, associate vice president for Human Resources at UST.
Reflecting on the breakfast, Father Quach said he hopes to collaborate with the UST staff, the alumni, the CFC Board of Advisors, and the UST community to represent the voice of the Church inviting all to encounter one another and to engage in open dialogue to be faith-filled citizens.

“We hope to continue the legacy of the Donald S. Nesti, CSSp Center of Faith and Culture, that is, solidifying the four legs of the table of CFC to provide excellent academic formation, solid pastoral and spiritual formation for lay leaders, and good and engaging ecumenical-interfaith dialogue,” Father Quach said.

He looks forward to the upcoming Faithful Citizenship Dinner on Oct. 2 where the center will honor Father Nesti.
For more information about the CFC, visit stthom.edu/cfc. †