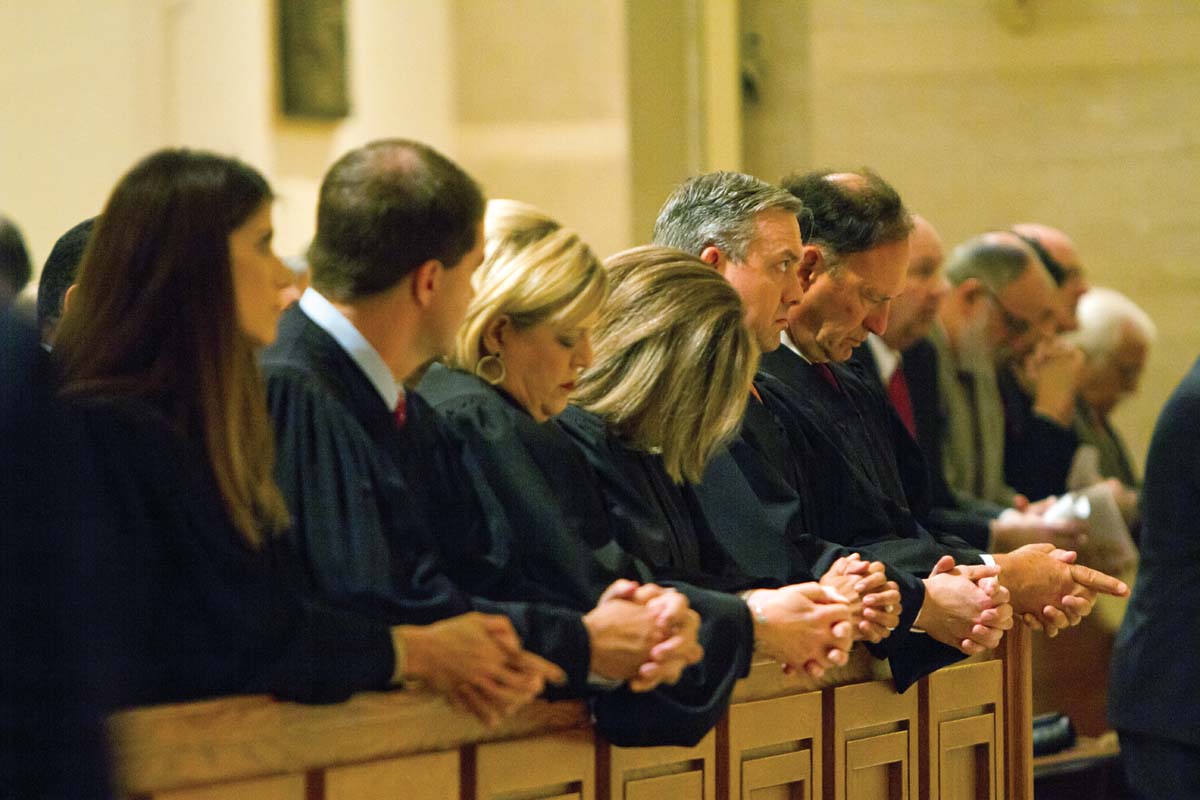 U.S. Supreme Court Justice Samuel A. Alito Jr., at far right, prays during Red Mass Sept. 28. He is one of three Catholics on the U.S. Supreme Court and spoke at the dinner following the annual Red Mass. Photos by James Ramos/Herald.

Justice Alito made his remarks to a full ballroom at the Hilton Americas Houston after the Red Mass at the Co-Cathedral of the Sacred Heart Sept. 28 celebrating the start of the judicial year.

Beginning with St. Thomas More, patron saint of lawyers, Justice Alito reminded the crowd that King Henry VIII beheaded More in 1535 when More refused to acknowledge the king and not the Pope as the head of the Church in England.

Justice Alito said, “now, even in modern times, there are beheadings of Christians. Reports cite 90,000 Christians were murdered in 2016 for their faith. Pope Francis said more Christians are being martyred in the present age than in the first centuries” when the Roman Empire tried to eliminate Christianity.

This is the highest number of persecutions, more than any other world religion, including Islam, Buddhism and Hinduism, he said.

The actions against religious freedom in the United States may be more subtle. Justice Alito referred to the decision last year when the U.S. Supreme Court declined in a 5 to 3 decision to hear a case involving a Washington state requirement that all pharmacies must fill prescriptions for contraceptives and abortion-causing drugs regardless of the religious objections of the owners.

Justice Alito wrote a dissent — joined by Justice Clarence Thomas and Chief Justice John Roberts — after the Supreme Court denied an appeal to hear the conscience rights case. At the time, Alito said, “This case is an ominous sign. If this is a sign of how religious liberty claims will be treated in the years ahead, those who value religious freedom have cause for great concern.”

Justice Alito then quoted folk singer Bob Dylan to the crowd. “As the 2016 Nobel Prize winner sang, ‘It’s not dark yet, but it’s getting there.’”

Then, switching gears to speak about President George Washington, Justice Alito described how the first president took time to write to the Baptists and Quakers and even the small communities of Jews and Catholics of “toleration” and not giving bigotry any sanction.

“Washington stated that religion and morality were indispensable if the new American republic were to thrive,” Justice Alito said.

This is a lesson that modern America and the world are still trying to learn, he said.
“When Christians, Jews, Muslims, Hindus and other religions and nonbelievers can live in mutual respect, we can make liberty shine again,” Justice Alito said.

At the Red Mass earlier that evening, Daniel Cardinal DiNardo blessed the judges and lawyers in attendance, praying that they be public servants to all, especially the voiceless.

The Red Mass tradition dates from 13th century Europe and received its name from the red color of the vestments worn by the priest celebrants and the scarlet robes worn by the Lord High Justice. In the United States today, an annual Red Mass is celebrated in most metropolitan areas and is attended by judges, lawyers, public officials, law school faculty and law students of all faiths.