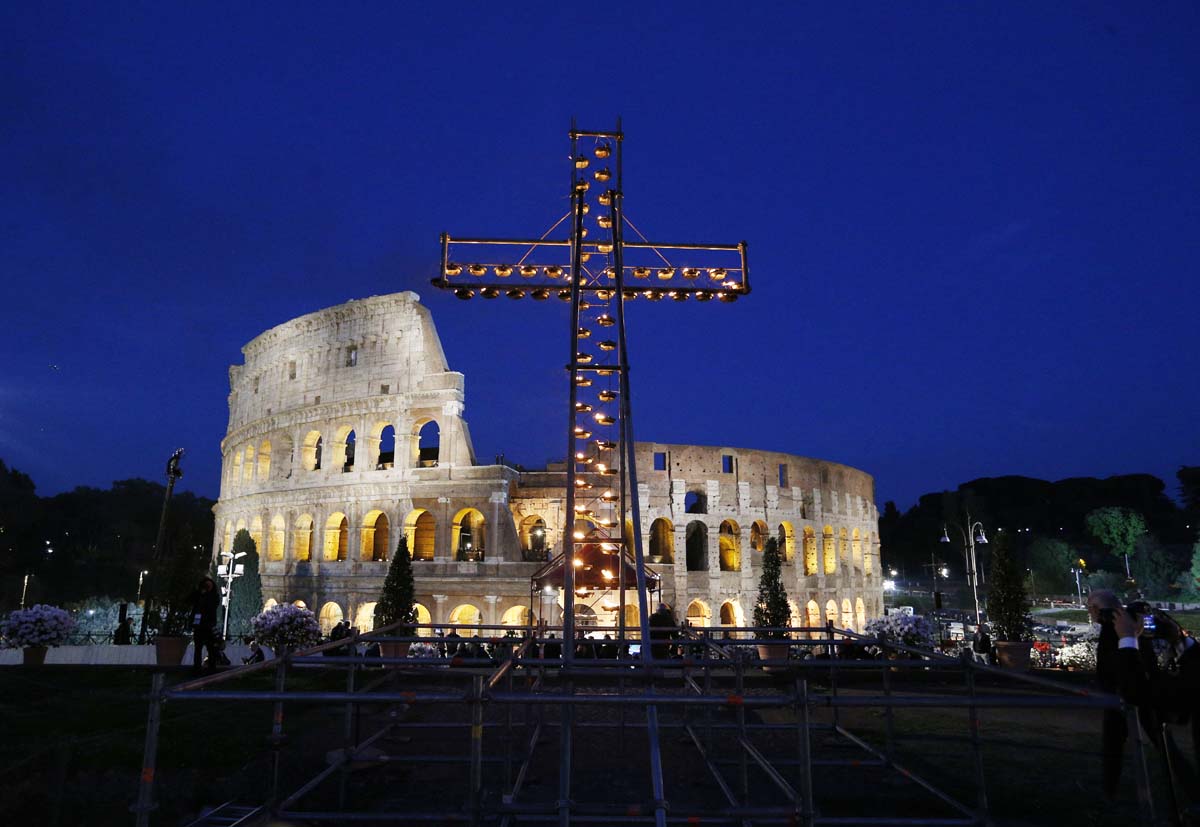 A cross illuminated by torches is seen April 19 outside Rome's Colosseum before Pope Francis leads the Way of the Cross. The pope had asked Consolata Sister Eugenia Bonetti to write the meditations for this year's Way of the Cross service on Good Friday. Sister Bonetti has led a major international effort by religious orders to fight human trafficking and help women and girls rebuild their lives after they were tricked by traffickers into prostitution. CNS photo.

HOUSTON — The Amistad Movement is a national education campaign promoted by the U.S. Conference of Catholic Bishops (USCCB) that works to empower immigrants and local leaders to prevent human trafficking in their communities.

The Amistad Houston chapter is hosting an anti-trafficking seminar from 9 a.m. to noon on Saturday, May 18 at the Cathedral Centre, located at 1701 San Jacinto St. in downtown Houston, to create awareness in the Houston community.

Named for the captives aboard the Amistad slave ship who revolted and won their freedom, Amistad Houston works to educate the Houston community about what human trafficking is, identifying the vulnerable, understanding the Catholic Church’s response and empowering others to make a difference.

Jordyn Woods, outreach coordinator at the Co-Cathedral of The Sacred Heart, became involved with Amistad Houston nearly six years ago at a similar seminar.

“It is one of those things that you cannot ‘un-see,’” Woods said. “Once you attend one of our seminars, you will start seeing how human trafficking is a part of your life. While we don’t see human trafficking practiced out in the open like it was generations ago, it is still thriving and growing today. As we are becoming more educated and aware, we can put a stop to the practices that directly or indirectly support trafficking.”

Amistad Houston and the USCCB work to make the community more aware of ways that citizens are witnessing human trafficking all around them. Lisa Lungren, the USCCB’s National Outreach Coordinator in Immigration and Trafficking with the Migration and Refugee Services Department, said it occurs in multiple industries such as agriculture, domestic work, nail salons, massage parlors, construction sites, restaurants, commercial cleaning services, hospitality and more.

“Victim identification is often hindered through lack of awareness and misinformation,” Lungren said. “Many still believe that it is a far-off global problem. They are not cognizant that women, children and men are exploited right in our own country. Forced labor and sexual commercial exploitation is happening in our urban centers, suburbs and rural areas.”

Lungren and the USCCB work to improve victim identification and access to services for women, men and children subjected to human trafficking and exploitation in the labor and sex industries. The USCCB also assists dioceses, parishes and local community organizations in establishing partnerships with coalitions and stakeholders to support survivors of human trafficking.

“It has been inspiring to watch Amistad Houston’s anti-trafficking ministry evolve,” Lungren said. “The initial trainings in Houston were to at-risk and immigrant communities; organically it has grown to build on the local capacities of certified volunteers from across the Archdiocese to educate and raise awareness. The program is now reaching diverse and wide-reaching audiences.”

Woods is one of those volunteers who does this in addition to a normal day job. She and her husband run a registered financial advisory firm, she works for the Co-Cathedral of the Sacred Heart and is raising her 17-month old daughter. Even with so much on her plate, she is committed to helping educate the Catholic community about the injustice surrounding Houston.

“Human trafficking goes against everything the Catholic Church stands for,” Woods said. “We are made in the image and likeness of God and God is love. How is it love to allow our fellow brothers and sisters to work for nothing or to be passed around a brothel for base pleasure? The first Catholic Social Teaching discusses the Life and Dignity of the Human Person. Human traffickers put greed and selfishness above the dignity of their victims.”

Lungren also said that our Church asks us to uphold the sanctity of human life throughout all stages of life.

“Catholic Social Doctrine decries human trafficking as a reprehensible violation against the sanctity, fundamental dignity and rights inherent in every human person,” she said. “Acts which lead to the buying and selling of human beings are prohibited in our Catechism. This prohibition was reiterated during the Second Vatican Council. All three of our most recent papal leaders — Pope John Paul II, Pope Benedict XVI, and Pope Francis — have called for the eradication of modern-day slavery and the protection of survivors.”

Amistad Houston is one of many organizations in Houston responding to the atrocities of human trafficking. Many parish outreach ministries, such as at the Co-Cathedral of the Sacred Heart, Catholic Charities, the Houston Police Department, and other non-profit agencies, such as the YMCA International, collaborate to provide assistance when a specific need of a rescued survivor is identified.

“One of my favorite aspects of my work at USCCB is accompanying leaders on the ground (such as those involved with Amistad Houston) who are confronting forced labor and commercial sexual exploitation in their own localities,” Lungren said. “I feel energized by parish and diocesan volunteers who are taking simple but powerful steps to follow Pope Francis’ call to ‘take responsibility, denounce injustice and stand firm against this shameful crime.’”

On Good Friday this year, Pope Francis led a Way of the Cross service in Rome’s Colosseum that was focused on human trafficking. The meditations were written by Consolata Sister Eugenia Bonetti, who has led a major international effort by religious orders to fight human trafficking and help women and girls rebuild their lives after they were tricked by traffickers into prostitution.

Lungren said there is no need to feel overwhelmed in thinking we need to change the world overnight. She and Woods encourage people to register for the training on May 18 with Amistad Houston to become more aware and learn what you can do to help.

“I encourage those considering attending the seminar to join us with an open mind,” Woods said. “This is not just an issue for other countries or other cities. This is an issue that has real and tangible effects on you, your city and your country.

Lungren and Woods encourage those who see suspicious activity that may be human trafficking to report it safely by calling 1-888-373-7888 or texting “Help” to 233733.

To RSVP for the seminar online, as well as request a speaker to come to your parish and learn more, visit www.amistadhouston.org.