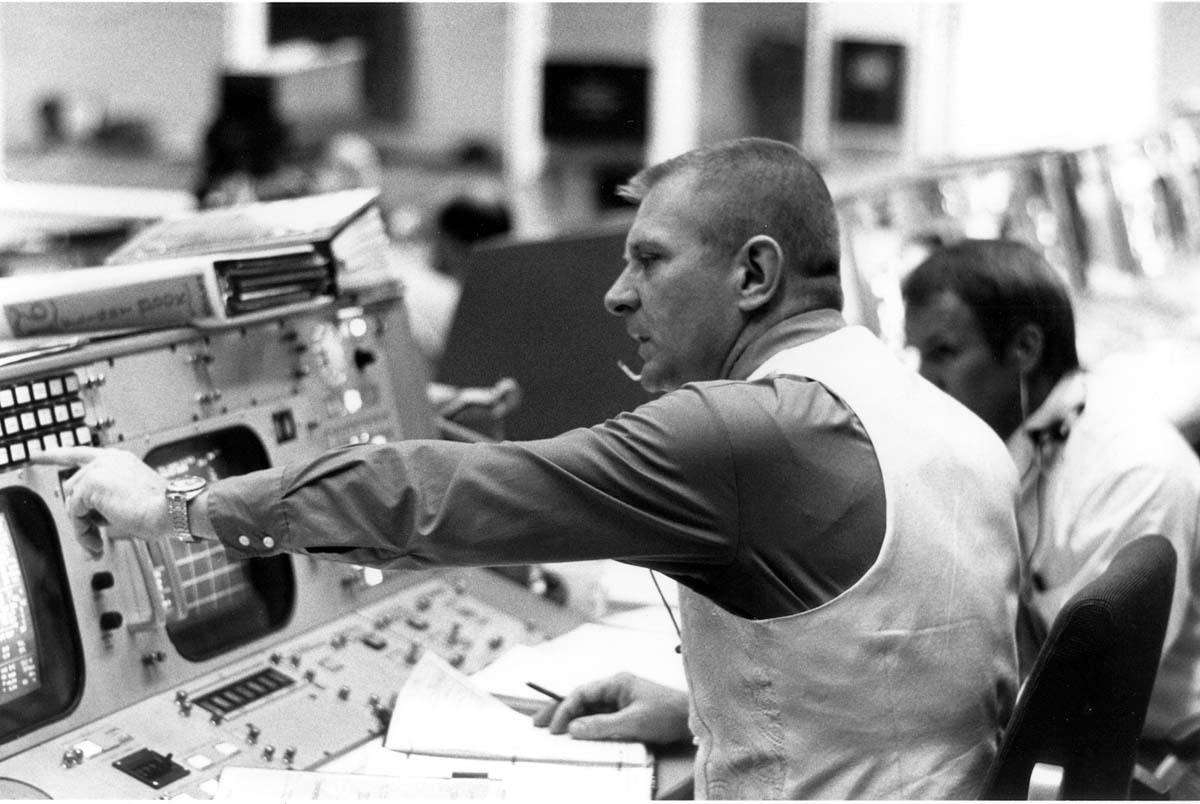 Gene Kranz, retired flight director for NASA’s Apollo Program, at work during the Apollo 16 launch on April 16, 1972. Kranz, a Catholic and parishioner of Shrine of the True Cross Catholic Church in Dickinson, will speak at the 2019 Archdiocesan Prayer Breakfast at the Marriott Marquis in downtown Houston on July 30. Photo courtesy of Gene Kranz.

HOUSTON — When attendees gather for the Archdiocesan Prayer Breakfast on July 30, Event Chair Tom Thibodeau said they should be ready for a new approach to the annual event.

“We will be at a new hotel this year,” Thibodeau said. “That’s the first thing we want people to know.”

At a new location, this year’s Prayer Breakfast will take place at 7:30 a.m. at the Marriott Marquis Houston, located at 1777 Walker St. in downtown Houston.

The second new thing — and something Thibodeau hopes will be intriguing for attendees — is this year’s featured speaker: Gene Kranz, retired flight director for NASA’s Apollo Program. Kranz was instrumental in flight operations for the Apollo 11 lunar landing in July 1969. He was portrayed by Ed Harris in the Ron Howard film “Apollo 13,” which follows Mission Control’s struggle to come up with a plan to bring the ship and its crew safely back to Earth after the oxygen system failed.

His keynote is titled “God is My Co-Pilot,” and the breakfast coincides with the 50th anniversary of the Apollo 11 lunar landing.

“We don’t always think of faith and NASA as going together,” Thibodeau said. “With so much technology and stimulation at our fingertips, sometimes we lose track of awe. But watching those images of those men walking on the moon was awe-inspiring.”

Thibodeau hopes that attendees will be taken with Kranz’s story of his work at NASA, as well as learn more about his faith as a guidepost for his accomplishments.

Originally from Toledo, Ohio, Kranz graduated in 1954 with a bachelor of science degree in aeronautical engineering from Parks College of St. Louis University, the second-oldest Jesuit university in the country and the oldest college west of the Mississippi.

He is the co-recipient of Presidential Medal of Freedom, awarded by President Richard Nixon for the Apollo 13 mission. Kranz is also the author of “Failure is not an Option,” chronicling his NASA career. He is a parishioner at the Shrine of the True Cross Catholic Church in Dickinson.

“People think you can’t be a scientist and have faith, but I believe you absolutely can be both, and that it’s vital to realize that science and faith are not at odds with each other,” Thibodeau said. “Having Gene Kranz deliver the keynote at our breakfast should be appealing to a broad audience.”

Thibodeau said that Kranz’s story will be of interest to NASA enthusiasts and those who recall the moon landing. But he also knows that people of deep faith will want to hear Kranz’s reflections on how his belief in God and his Catholicism have strengthened him throughout his life.
Thibodeau said he’s aware of several people who’ve already purchased tables for the prayer breakfast who plan to bring along colleagues and clients who might not be Catholic but will want to hear Kranz speak.

“Some people have misconceptions about Catholics and the Catholic Church,” he said. “I think they will be quite surprised to see how Kranz’s faith – how all of our faith – is reflected in our daily lives.”

Inspired by the National Catholic Prayer Breakfast held annually in Washington, D.C., the Archdiocesan Prayer Breakfast is an opportunity for Houston’s entire Catholic community to come together in fellowship and faith.

Thibodeau anticipates the event will sell out, so he’s encouraging people to purchase seats early. Individual tickets are $60 each; tables of 10 are available for $600. They can be purchased at www.archgh.org/prayerbreakfast.