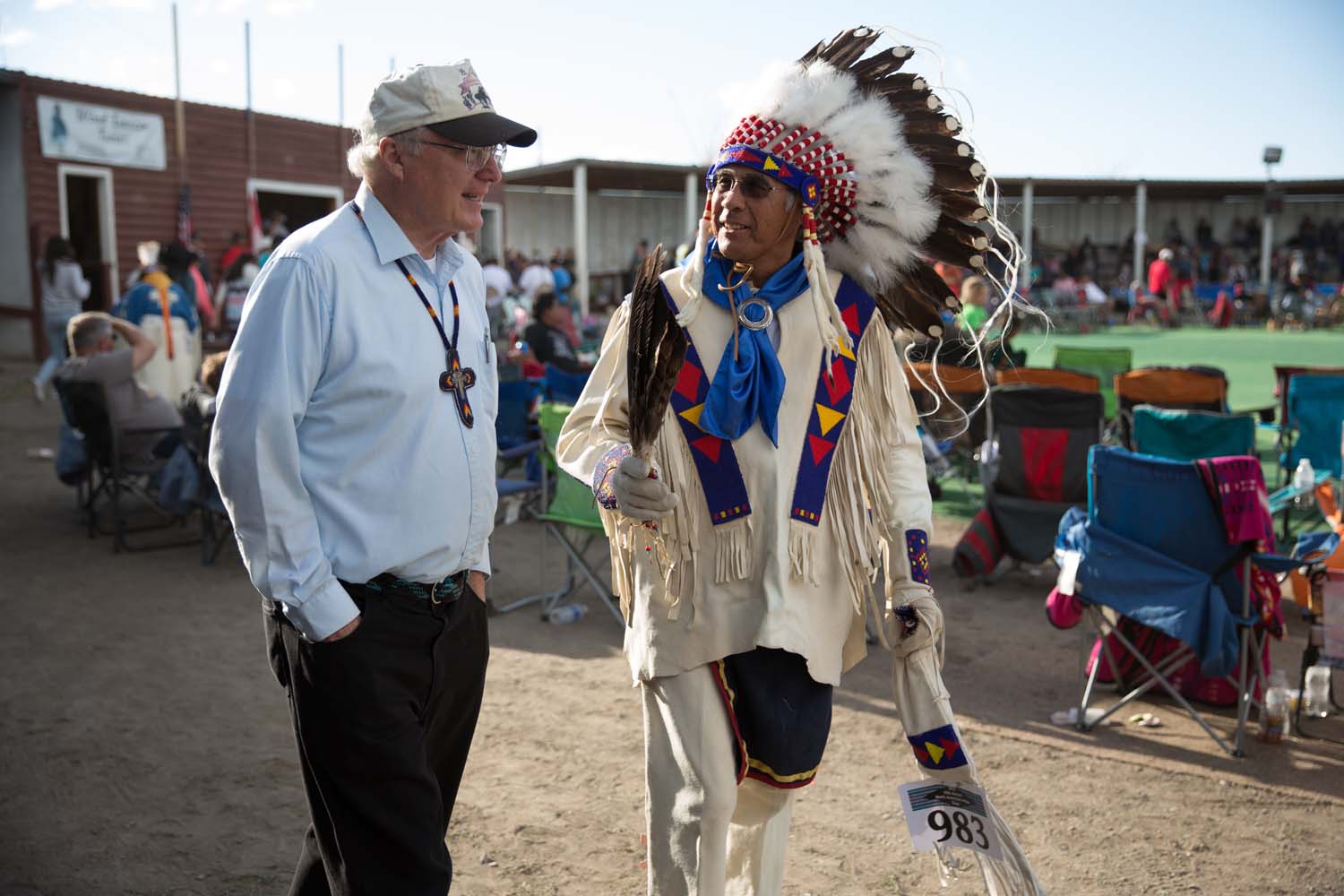 HOUSTON — At an October 2019 gathering, American Indian tribal leaders met with Church leaders to realize strategies to address poverty that plagues many of the roughly 6.9 million American Indian and Alaska Natives, a recent estimate by the U.S. Census that included those of more than one race.

The Catholic Extension estimates that as many as one in four Native Americans in the U.S. are Catholic.

According to the Economic Policy Institute, Native American, African American, and Hispanic children face the highest poverty rates, all hovering around 30%. Nearly 20% of families were living under the poverty rate in 2019.

Health disparities continue to rise in these populations. The National Congress of American Indians (NCAI) said Native people die at higher rates than other Americans from tuberculosis (600% higher), alcoholism (510% higher) and diabetes (189% higher).

One common theme expressed by several of the Native Americans was that Indian tribes have a deep spirituality, a codified legal system, and strong devotion to family and community — values that are often not acknowledged by the wider population, Catholic News Service reported.

Native youth have the highest rate of suicide among all ethnic groups in the U.S., with suicide as the second-leading cause of death for Natives aged 15 to 24, according to the U.S. Dept. of Health and Human Services.

To combat poverty both on the parish-level and within Native American populations, groups are focusing their efforts on charity and service, primarily on advocating “for peace and justice” in Indigenous communities.

Kateri Prayer Circles are affiliated with the Tekakwitha Conference, a Catholic organization dedicated to the “ongoing advocacy and evangelization on behalf of the many communities of Indigenous Catholics across North America.”

Named after St. Kateri Tekakwitha, the young Mohawk/Algonquin woman from the mid-17th century who was canonized a saint in 2012, the groups also focus on spiritual, intellectual and communal areas to promote enrichment and growth.

A recent report by the U.S. Conference of Catholic Bishops, titled “Two Rivers,” is “an accounting of the vibrancy and sacredness that constitutes Catholic faith and Native American cultures.”

“Ministry to Catholic Native Americans, therefore, can be understood as two rivers that merge to make one,” the report said.

The report was an effort by the U.S. Bishops’ Secretariat of Cultural Diversity in the Church, Bureau of Catholic Indian Missions and the Center for Applied Research in the Apostolate (CARA).

“Catholic Native American communities have their unique stories of struggle and anguish, but also a history of resilience and holding on to the cultural elements of spirituality and faith. Preserving these cultural elements is one of the most important roles of our Catholic ministerial work,” the report said.

Rich May, a parishioner at St. Clare of Assisi Catholic Church in Houston, said Pine Ridge, the site of the 1890 Wounded Knee massacre, is the home of the Lakota Sioux in South Dakota and “is a microcosm of the worst of problems existing on some reservations, and one of the two poorest counties in the nation.”

A hillside on the reservation is filled with white crosses of babies who did not survive the harsh, cold winters of the Dakota plains.

The poverty issues, found at such reservations like Pine Ridge, touch “the core of Catholic social teachings,” he said. “Responding to this social disparity is part of our Catholic identity and requires effective social justice advocacy. Public awareness is crucial.”

The Bureau of Indian Affairs said in 2019 that there were at least 573 federally recognized Indian tribes in 2018, including the Turtle Mountain Band of Chippewa Indians who live on the Turtle Mountain Reservation in North Dakota near the U.S.-Canada border.

Within the reservation, the Servants of Our Lady of the Most Holy Trinity (SOLT) run St. Ann’s Catholic Indian Mission and School, which serves the youth of the reservation in pre-kindergarten to sixth grade. The school is the only alternative PreK-6 education center in Belcourt, the reservation’s largest city.

SOLT serves three parishes, operated by a team of priests, sisters and lay volunteers. The school, and a summer camp for 150 youth, are free to attend.

St. Ann is also one of the largest and poorest parishes in the Diocese of Fargo, N.D. Former parochial leaders said they have regularly seen issues similarly seen at Pine Ridge, including poverty.

The report concludes its introduction by quoting Pope Francis: “Let us say yes to the encounter between peoples and cultures. Blessed are the peacemakers.”