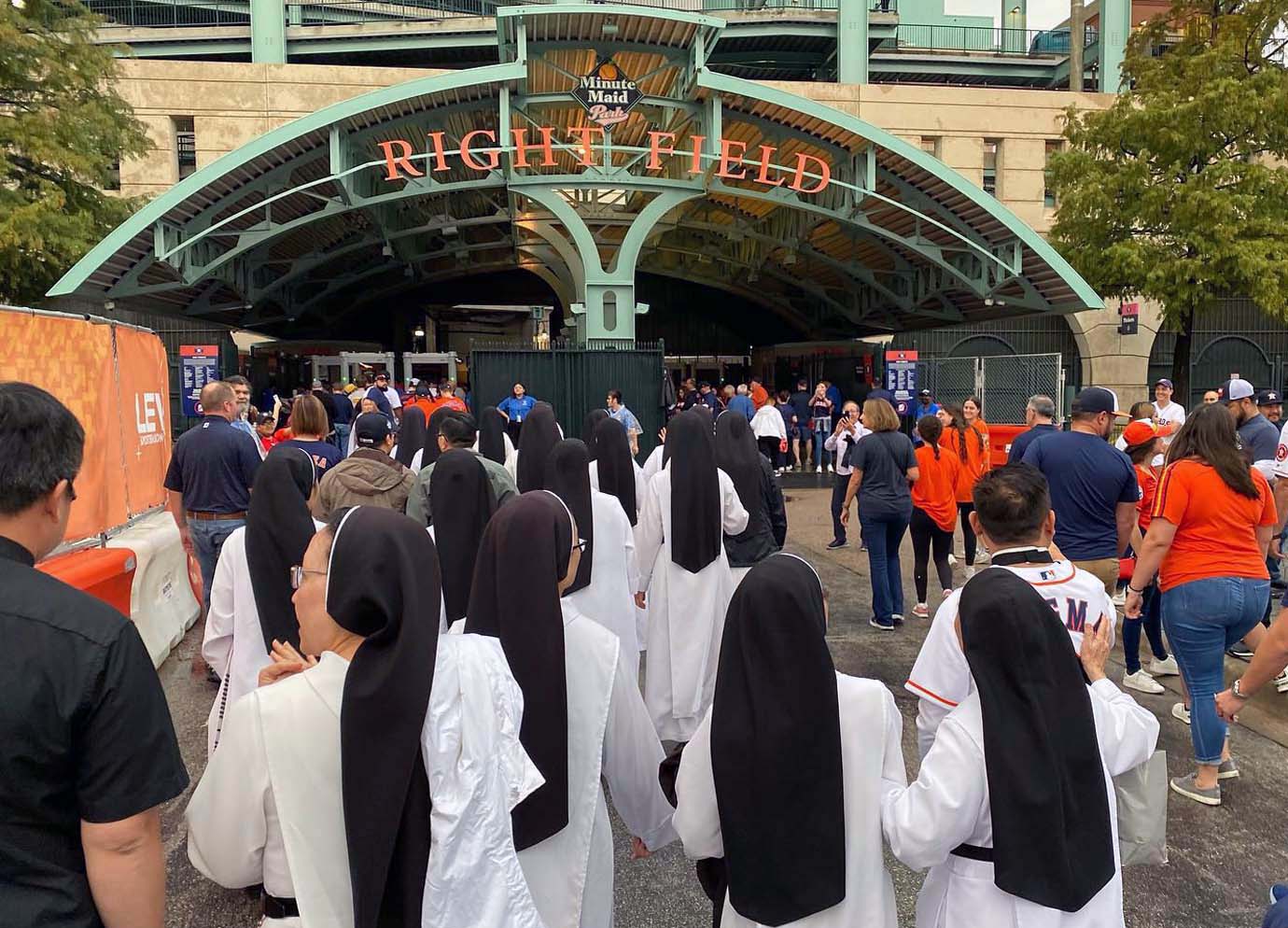 Dominican Sisters of Mary Immaculate Province, dressed in their iconic black and white habits, walk to Minute Maid Park, to watch Game 1 of the World Series. The Dominicans, as well as several other consecrated men and women, were at every home game of the Astros’ World Series victory. (Photo courtesy of Sister Mary Catherine Do, O.P./Shiner Catholic School)

HOUSTON — The walk-off. That loss. The no-hitter. The heart. The catch. That other catch. And then that moonshot seen around the world.

Each moment helped the Houston Astros make it a habit of reaching the World Series, and in their fifth World Series appearance, the Astros topped the Philadelphia Phillies in a roller coaster ride of a Fall Classic.

Both Catholic and Astros faithful were right there alongside the hometown team the whole time, including Father Jeff Bame, pastor and rector of the Co-Cathedral of the Sacred Heart, together with a group of iconic religious sisters, among many others who crowded the stands at Minute Maid Park or jumped from their couches at home. 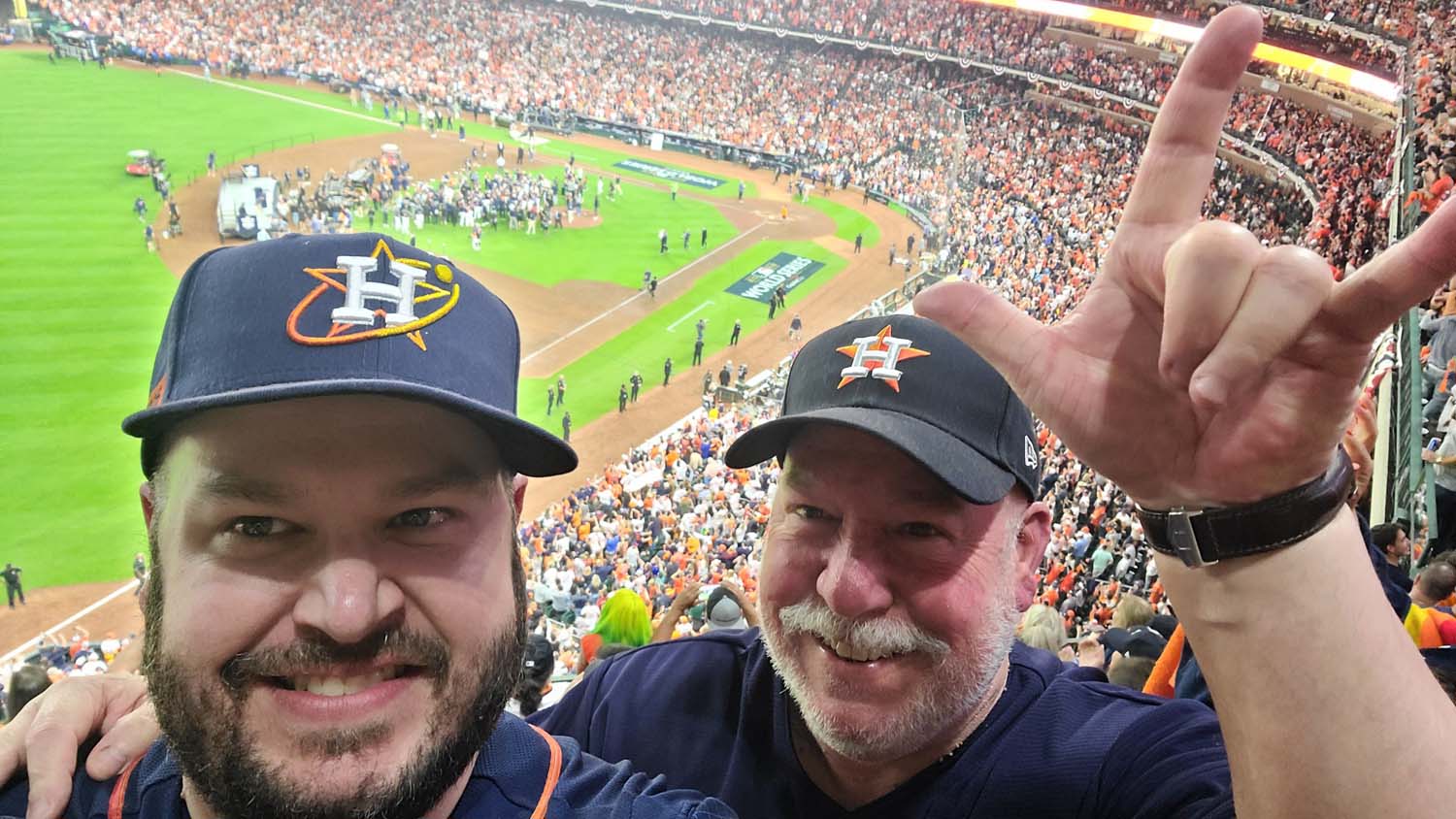 At right: Co-Cathedral of the Sacred Heart rector and pastor, Father Jeff Bame, at left, attended Game 6 of the World Series with his father Philip Bame.

For Father Bame, baseball has always been a lifelong favorite sport: he spent much of his youth on the diamond, primarily at second base or around the field as a utility player.

The priest said he learned the game with his dad, Philip Bame, when his dad was his coach. “Baseball has always been a huge part of my family life,” Father Bame said.

And that continues today, especially during the recent 2022 Astros World Series run, as the father-and-son duo are season ticket holders at the ballpark and were able to attend Games 1, 2 and 6 of the World Series.

The weekend of Game 6, Father Bame found himself making the trek between his downtown Houston home and Aggieland, where he graduated in 2005, to watch a football game that Saturday morning. He woke up at dawn before his drive to College Station to celebrate Mass. Even with a day bookended by an Aggie football game and an Astros World Series-clinching Game 6 win, Father Bame said that quiet morning, when he celebrated Mass, “was the best moment” of his day.

Though the World Series is marked by epic made-for-TV moments like Yordan Alvarez’s moonshot hit in Game 6, Father Bame said that it’s the times in between, the “small moments,” are where heroism and sanctity are found.

He saw this come to life after the Game 6 win when the players took to the field with their families and children. 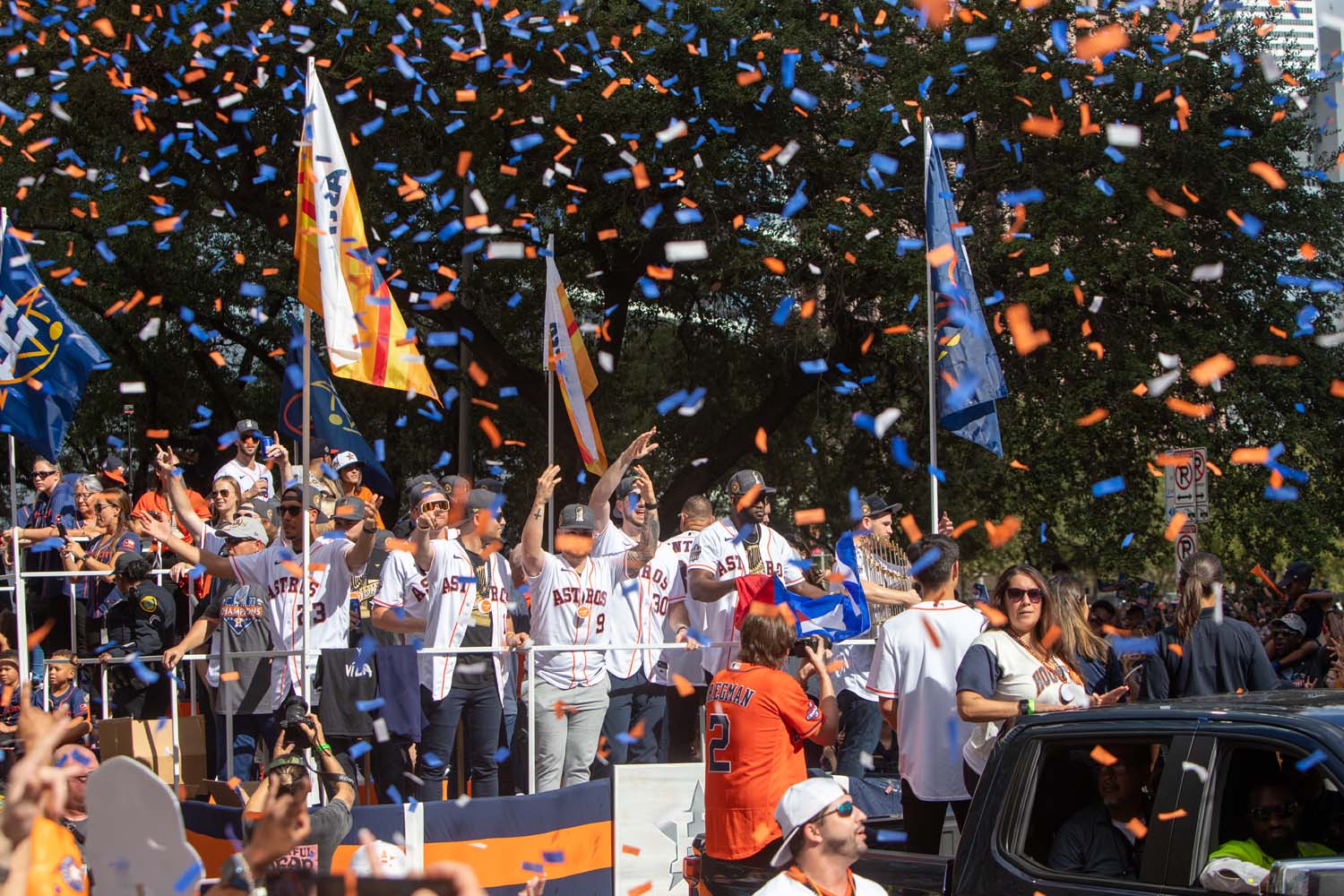 The Houston Astros hold a parade to celebrate their World Series victory over the Philadelphia Phillies on Nov. 7 in downtown Houston. This was the second win and the fifth appearance for the Astros at the World Series. (Photo by James Ramos/Herald)

“They’re not just competitive players; they’re also family men,” he said. The day after Alvarez hit the biggest home run of his life, Father Bame saw on social media a video of the slugger sitting on the living room floor with his daughter building a princess castle.

“Which moment is more precious?” asked Father Bame. “God is present in every moment, even the ones that are right under our noses. While we might live and focus on big moments, our holiness is made up from a lifetime collection of small moments and the things that seem small to us, the things that seem ordinary.”

And for Father Bame, that’s what celebrating daily Mass is. It’s an ordinary, daily event for him as a priest, but during Mass, “The intimacy of God’s presence is right there, and a gift... in terms of eternity,” he said. 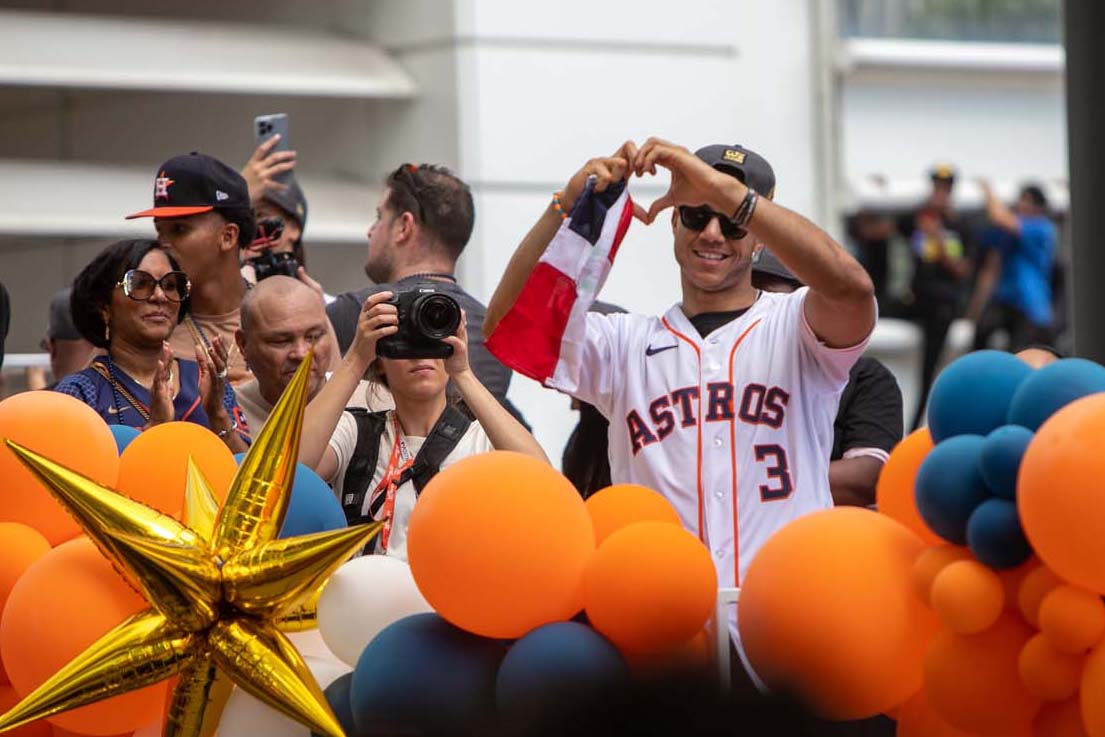 At right: Jeremy Peña #3 of the Houston Astros gestures during a World Series Parade on Nov. 7, 2022 in downtown Houston. The 25-year-old Astros shortstop was named MVP for the 2022 World Series and 2022 American League Championship Series, as well as a Gold Glove winner. (Photo by James Ramos/Herald)

And now that the champions have lifted the trophy up, and an entire city roared in appreciation and applause, “There’s just quiet,” he said. “Yes, we’re in the off-season, but [for us Catholics], our opportunities for sanctity are right before our face at every moment and never-ending.”

Before the pandemic, Father Bame was one of several priests who served as a chaplain for the Astros, celebrating Mass for Catholic Astros and those who worked at the ballpark.

Students at Incarnate Word Academy, located a little more than a third- to first-base throw away from Minute Maid Park, embraced the Astros postseason fever during their annual “Chalk the Block” effort that surrounds their downtown Houston campus in chalk art that supports their MLB neighbor.

The high school students showed off their artistic abilities, depicting team favorites like shortstop Jeremy Peña and the effervescent Orbit on the sidewalks that lead hundreds of thousands of fans every year up to the Juice Box.

Further away from the ballpark, students at other schools like St. Jerome, St. Elizabeth Ann Seton and St. Rose of Lima also turned orange for the Astros. Young students donned their favorite Astros gear, sporting bright hats, shirts and even baseball gloves, in support of the World Series rally.

They were back and they were ready

Another group of familiar faces were called up to the big leagues when the Astros reached the American League Division Series (ALDS) against the Seattle Mariners. 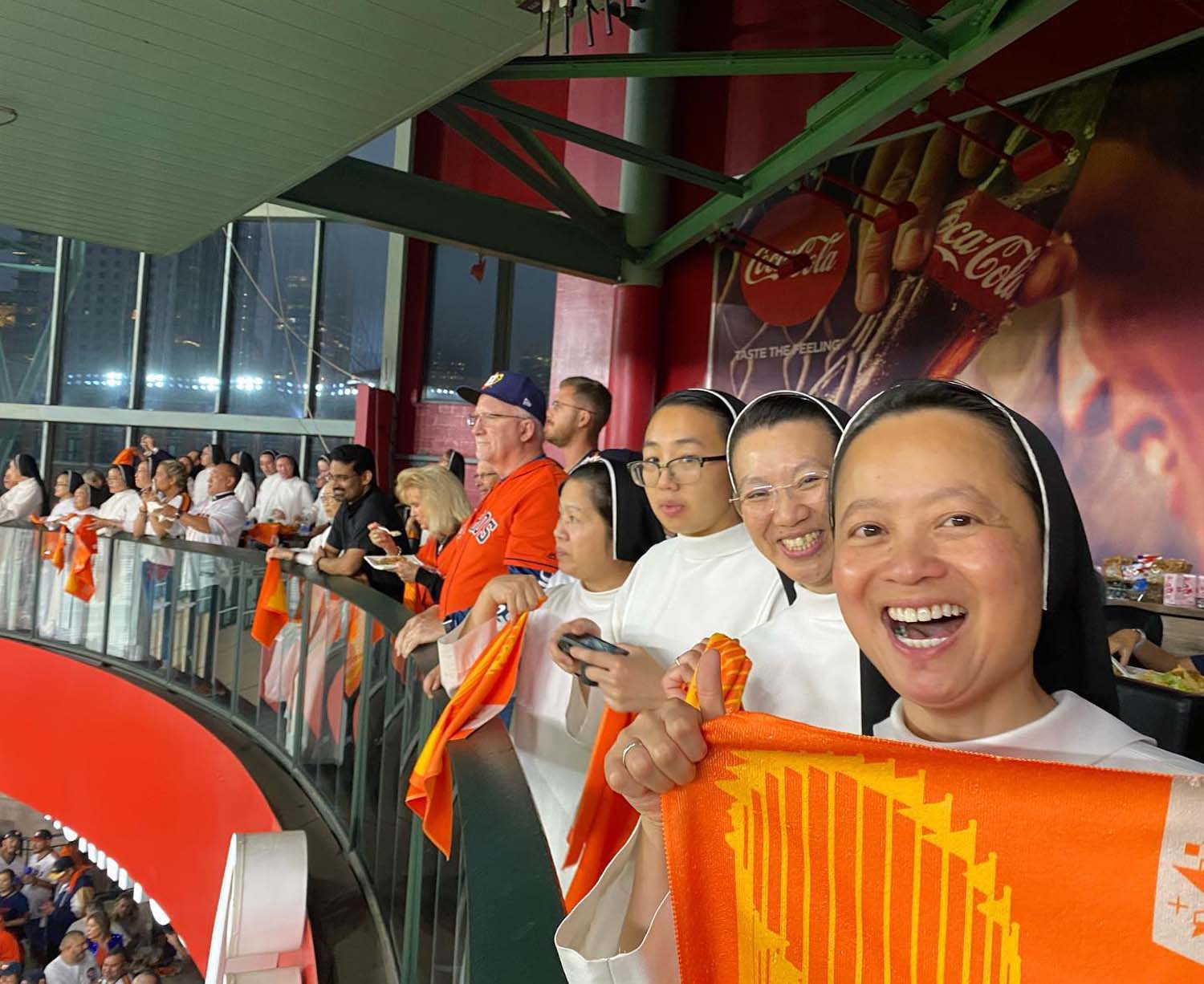 Unofficially called the Astros’ prayer squad, dubbed the “Rally Nuns” — though a distinction should be made: nuns typically pray and minister within their convent or monastery while sisters leave the convent for ministry and work — the Dominican Sisters of Mary Immaculate Province have also made it a habit of making it to the postseason.

At the invitation of Jim “Mattress Mack” McIngvale, other priests like Father Bame and consecrated religious joined the Dominican Sisters for the ALDS, the playoffs against the Yankees and, perhaps most importantly, the World Series.

Maybe Cristian Javier was inspired by the Rally Nuns’ faith. During his no-hitter win against the Phillies in Game 4, the right-handed pitcher did the Sign of the Cross consistently throughout each legendary inning and right at the final out.

“That’s the beautiful thing about sports,” Father Bame said, “is that it can bring people together. And it’s something we sorely needed, especially during a divisive election season.”

He described the sheer joy he saw in the stadium the night of the Game 6 clincher, the delight of the visible witness that the Rally Nuns brought to Astros fans of all (or no) faith in the stadium.

The Houston Astros will host the Chicago White Sox on Opening Day, March 30.