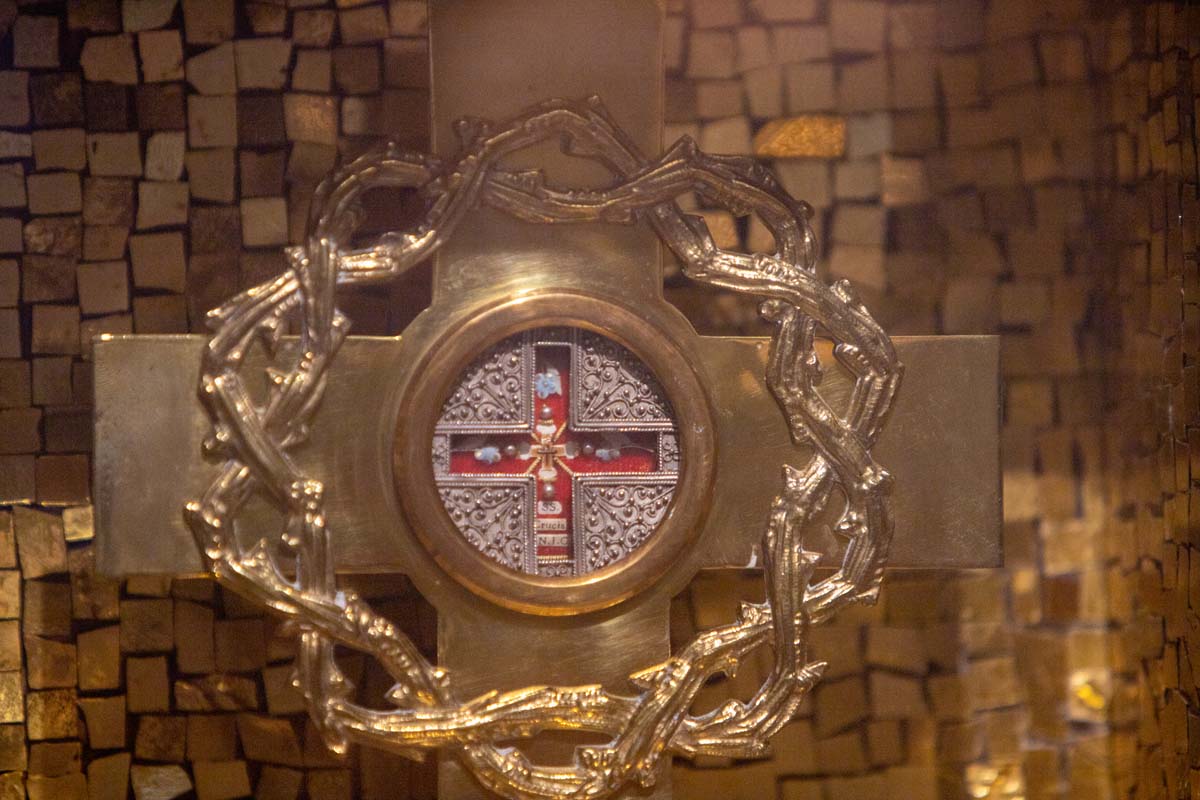 The Shrine of the True Cross Catholic Church in Dickinson is the only official shrine in the Archdiocese, containing relics of the True Cross. Faithful are invited to make a pilgrimage to the Shrine as part of their Lenten devotions in final weeks of Lent as Holy Week approaches. (Photo by James Ramos/Herald)

DICKINSON - The Shrine of the True Cross can be overlooked as thousands of Spring Breakers fly past its tall tan walls visible from I-45 on their way to Galveston’s beaches or the slides at Schlitterbahn.

The church sanctuary offers a special encounter for prayer that’s unique to the Texas Gulf Coast: a relic of the True Cross. According to the parish website, the Shrine of the True Cross is the diocesan shrine for the Archdiocese.

Faithful can embrace the Cross of Our Lord in prayer and receive a plenary indulgence under the usual conditions (sacramental Confession, Eucharistic Communion and praying for the pope’s intentions) to the faithful who, with a spirit detached from any sin, make a pilgrimage to the Shrine of the True Cross. The shrine is just one of only six official Catholic shrines in Texas and the only one in the Texas Gulf Coast.

Upon entering the large sanctuary, the relic is found in a special reliquary to the right of the altar. Dozens of flickering candles and a kneeler offer a special place to pray and venerate the True Cross. A golden crown of thorns adorns a gold reliquary shaped like a cross that holds the relic, two splinters of the cross.

Four small pearls follow the shape of another cross that holds the small relic. While the faithful might not be able to physically touch the relic to venerate it, simply praying in the presence of it or touching the glass partition can offer a special encounter of prayer, especially during Lent and Holy Week.

According to the parish record, roots of the shrine were planted in the 1930s by Father Thomas A. Carney, who oversaw Galveston County mission churches. He felt the need for a devotion to the cross and thought that a Shrine of the Holy Cross should be in Texas.

After receiving the blessing of Galveston Bishop Christopher E. Byrne, Father Carney chose Dickinson as a central point between Houston and Galveston. Soon the priest obtained permission from the Holy See, and the shrine became affiliated with the Shrine to the Basilica of Santa Croce in Gerusalemme in Rome.

Pietro Cardinal Fumasoni-Biondi, who was the Prefect of the Sacred Congregation for the Propagation of the Faith, was responsible for the connection.

He wrote a letter to Father Carney and said: “The saying ‘In Hoc Signo Vinces,’ is true now as it was in former times,” saying it was “most opportune” that Bishop Byrne wanted to raise the “Standard of the Cross aloft in the center of the diocese” at the Shrine. Eventually, Father Carney’s efforts paid off when on Sept. 13, 1936, the day before the Feast of the Exaltation of the Holy Cross, Bishop Byrne renamed and dedicated St. Joseph’s Church as the Shrine of the True Cross.

He processed with a Relic of the True Cross, splinters of the wood of the cross that St. Helena uncovered centuries ago. The relic was enshrined in the church for perpetual public veneration, a visible reminder to the faithful of Dickinson, the Archdiocese and the world of the Cross of Christ.

At the centennial celebration of the Shrine’s dedication on March 15, 2009, Cardinal DiNardo encouraged the faithful to always look to the cross.

“May those who come later say, whatever the trouble was in 2009, 2010, 2011, and beyond, whatever the anxiety, whatever the difficulty, it is these people who have matured in faith our Catholic heritage, who bring us through,” Cardinal DiNardo said. “I pray you have a wonderful Centennial, and you never lose sight of the Cross of Jesus Christ.”

This message was fitting for Cardinal DiNardo, considering his episcopal motto that he adopted says: “Ave Crux Spes Unica,” meaning “Hail the Cross, Our Only Hope.”

The shrine is just one of three shrines in the country dedicated to the True Cross.

Veneration of the relic of the True Cross is available before or after Mass, as well as during other scheduled activities in the church sanctuary. The parish has an 8:30 a.m. daily Mass on Tuesdays through Friday. The parish also hosts a bilingual Stations of the Cross prayer service on Fridays at 7 p.m.

For church hours, directions and more information about the Shrine of the True Cross, which is located at 300 FM 517 Road East in Dickinson, call 281-337-4112 or visit www.truecrosschurch.org.