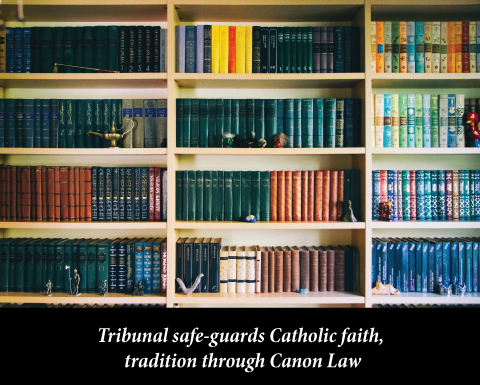 The ministry in the Archdiocese of Galveston-Houston focused on safe-guarding the Catholic faith and tradition through the understanding and practice of Canon Law is the Tribunal.

HOUSTON — The ministry in the Archdiocese of Galveston-Houston focused on safe-guarding the Catholic faith and tradition through the understanding and practice of Canon Law is the Tribunal. One of 60 ministries supported by the Diocesan Services Fund (DSF), the Tribunal helps interpret Canon Law to protect the rights of its members and ensure they are treated equally and fairly.

The Tribunal acts as a resource to the Archbishop and priests, religious and laity at the parish level in all canonical matters. This includes assisting agencies and institutions of the Archdiocese with information of policy or programs, including declarations of marriage nullity, commonly known as annulments. The ministry also serves as a tribunal of second instance appeals for six other dioceses in its Province.

Working with the faithful on annulments is a primary focus of the Tribunal. Trained and experienced clergy and lay case workers at the parish level are assigned to help people who have divorced to investigate whether their former marriages failed to fulfill the Church’s theological and canonical understanding of marriage. The Tribunal helps train the case workers through workshops and one-on-one training as needed.

According to Anne Bryant, JCL, director of the Tribunal, petitions for annulments have increased dramatically in the Archdiocese over the past year, with close to 700 petitions received to date. She believes it is due in part to the changes Pope Francis made to the annulment petition process at the start of the Jubilee Year of Mercy on Dec. 8, 2015. The new streamlined process has given the local bishops more opportunities to assume the role of judge in their dioceses, eliminated the automatic appeals processes for all petitions, and asked the dioceses to reduce or eliminate fees to those who file.

“We are showing God’s love as He has asked us to do through Canonical Law, which upholds the sacredness of the Sacraments, including marriage,” Bryant said. “The work of the Tribunal is very important today since Catholics and people of all religions are getting divorced at a higher rate than ever; many may want to remarry in the Catholic Church. Without this annulment process, Catholics could not remarry in the Church after they divorce, so we feel that both justice and mercy are given to the faithful so healing may begin from these broken marriages.”

Bryant said the DSF helps support the Tribunal in several ways, including its ability to hire enough staff members to effectively serve the increased number of petitioners in a timely manner. The funding also has helped eliminate costly fees, making the process both affordable and readily available to all those who seek an annulment. The only fee charged currently is $100 for the possessing of the formal petitions, which can be waived if a person cannot afford it.

Father Lawrence W. Jozwiak, J.C.L., the Tribunal Judicial Vicar, agrees the DSF is critical to the ministry and those it serves.

“Divorce is a painful reality to all concerned: the spouses, any children (both younger and older), extended family members, and friends and society,” said Father Jozwiak. “One of the possible effects of the tribunal process is to bring healing to those concerned. We, as Church, are called to bring healing when possible, so it’s so important for the faithful of the Archdiocese to support the DSF so that the Tribunal can continue to serve the people in need of this ministry.”