To be pastoral, look to the Good Shepherd, pope says 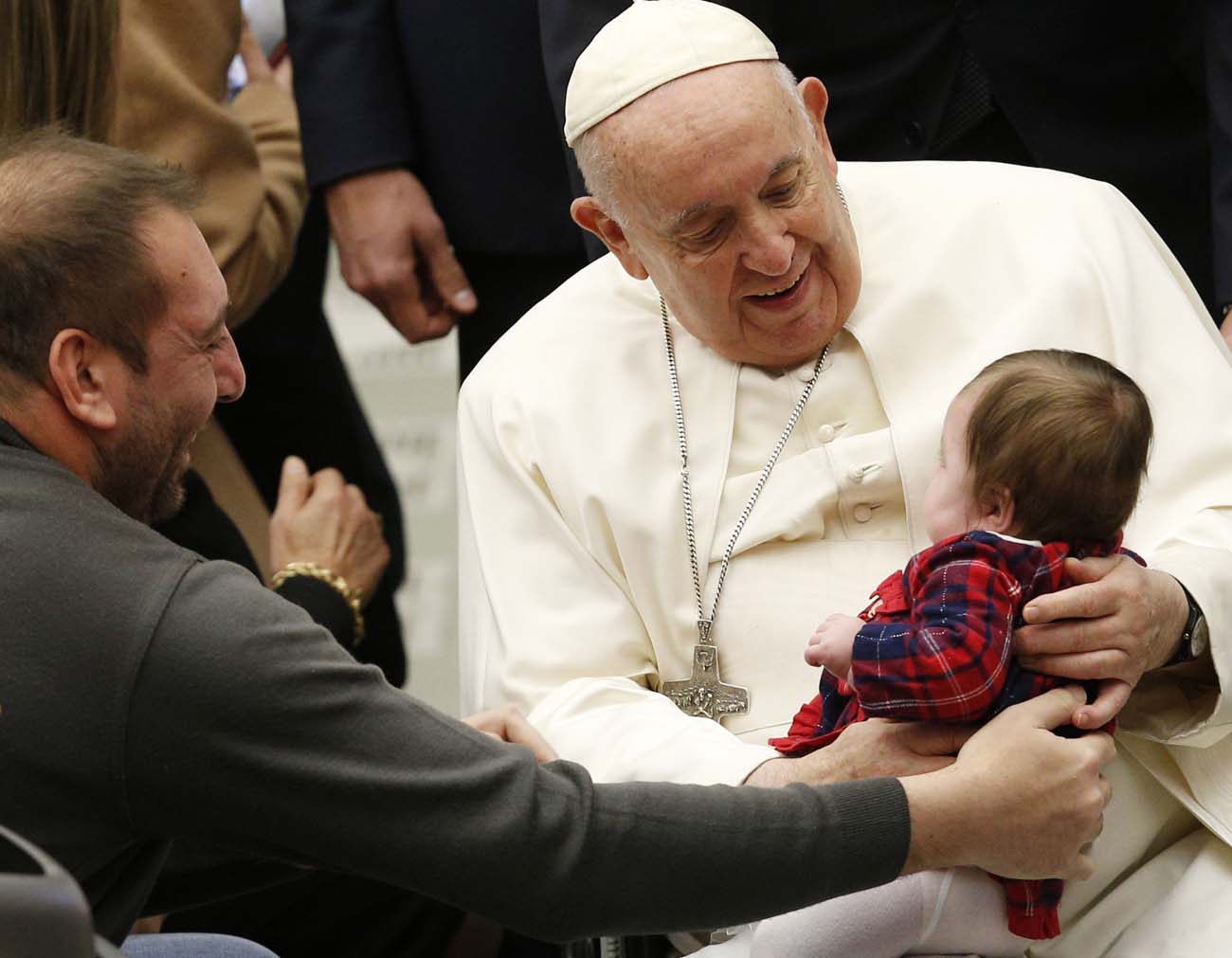 Pope Francis holds a baby during his general audience in the Paul VI hall at the Vatican Jan. 18. (CNS photo)

VATICAN CITY (CNS) — Christians must develop a pastoral heart to care for those who have not heard the Gospel or who have left the fold, Pope Francis said.

“By being with Jesus, we discover that His pastoral heart always beats for the person who is confused, lost, far away,” the pope said at his weekly general audience Jan. 18. “Jesus never said, ‘Let them sort themselves out,’ He went out to find them.”

Pope Francis encouraged Christians to model themselves on Jesus, the Good Shepherd, longing for those who have left the Church just as a shepherd longs for lost sheep rather than treating them as “adversaries or enemies.”

“When we meet them at school, work or on the streets of our city, why don’t we think instead that we have a beautiful opportunity to witness to them the joy of a Father who loves them and has never forgotten them?” the pope asked.

Being a shepherd is not merely a job but a “true and proper way of life: 24 hours a day,” he said. Jesus, the Good Shepherd, “does not just do something for us, but He gives His life for us.”

The pope encouraged the pilgrims and visitors gathered in the Vatican’s Paul VI Audience Hall to reflect on how God seeks out those who distance themselves from Him, saying that many Christians may have followed Jesus for a long time but “have never wondered if we share His feelings if we suffer and we take risks.”

“The Lord suffers when we distance ourselves from His heart,” he said, “but in response to this suffering, He does not withdraw; rather He risks. He leaves the 99 sheep who are safe and ventures out for the lost one.”

“Do we feel similar emotions?” the pope asked.

Without a love that suffers and takes risks for others, Pope Francis said, “we risk being pastors only for ourselves.”

At the end of his catechesis, the pope greeted a group of pilgrims from Congo, where he will travel Jan. 31, and asked for prayers for the country.

He also remembered Father Isaac Achi, who was killed Jan. 15 when bandits set fire to his parish rectory in Minna, Nigeria.

“So many Christians continue to be the target of violence; let us remember them in our prayers,” said the pope.

Pope Francis’s fifth trip to the African continent will highlight gestures of peace and reconciliation, consoling the victims of violence but also emphasizing the importance of each person sowing peace in the family, the neighborhood and the nation.

The pope is scheduled to travel to Kinshasa, Congo, Jan. 31 to Feb. 3 before making an ecumenical pilgrimage to Juba, South Sudan, Feb. 3 to 5 with Anglican Archbishop Justin Welby of Canterbury and the Rev. Iain Greenshields, moderator of the Presbyterian Church of Scotland.

“It is enough ... that the pope is going to support the peace process; but the fact that he and his colleagues have committed to doing this as a joint visit should be understood to be a spectacular commitment to the peace process itself,” said Chris Trott, the British ambassador to the Holy See and former British envoy to Sudan and South Sudan.

Although the civil wars in both Congo and South Sudan officially have ended, the people continue to suffer from horrific acts of violence, which force the large-scale displacement of communities and keep much of the population in poverty.

Both countries are rich in natural resources, which makes the poverty even more glaring, but also gives the powerful or the disgruntled something else to fight over.

Pope Francis frequently decries the notion that “Africa is to be exploited.” As he told the Comboni Missionaries’ magazine in an interview published Jan. 14, the world’s powerful nations gave Africa “independence halfway: they give them economic independence from the ground up, but they keep the subsoil to exploit,” extracting oil or minerals and paying only a pittance.

Archbishop Ettore Balestrero, the nuncio to Congo, told reporters in Kinshasa Jan. 10 that Pope Francis’s plan to visit the country is an acknowledgment of Congo as the African nation with the most Catholics — close to 50 million faithful — and “the country of the first black bishop of the African continent,” Nzingo Mpemba said.

The theme of the pope’s visit, “All reconciled in Jesus Christ,” he said, is a call to the Congolese to set aside grudges and unite to end the great suffering of those who live under the constant threat of violence, particularly in the eastern part of the country.