The Great Commission: Caring for God’s ‘People of the Sea’ 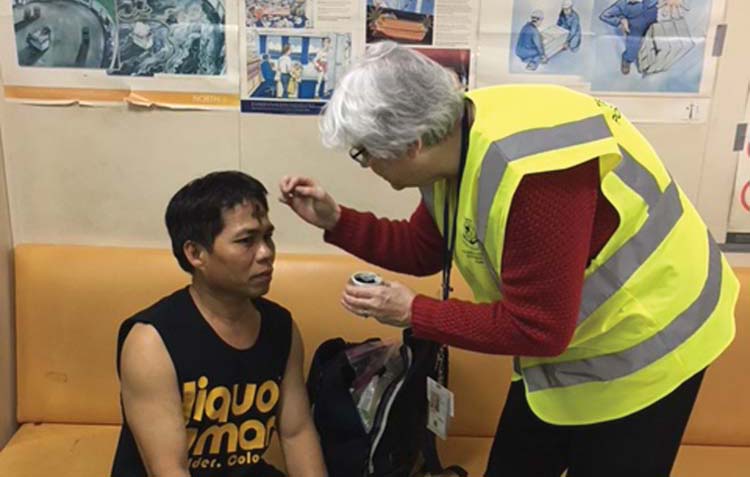 As the lay ecclesial port chaplain in Galveston, Karen Parsons distributes ashes on the Certus Ocean on Ash Wednesday, Feb. 14. Photo courtesy of the Apostleship of the Sea.

HOUSTON — Making disciples of Christ among the tens of thousands of seafarers and fishers that enter the ports located within the Archdiocese of Galveston-Houston is the evangelization call of the Apostleship of the Sea (AOS).

One of 60 ministries supported by the Diocesan Services Fund (DSF), the ministry’s mission is to serve the seafarers, fishers, their families, dock workers, maritime cadets, security personnel, truck drivers and other workers in the local maritime industry, which represent many faiths, nationalities and cultures.

According to Karen Parsons, a lay ecclesial chaplain who has served in the Archdiocese for 25 years, the AOS prioritizes visits to the cargo and tanker vessels in the Ports of Galveston, Texas City, Barbour’s Cut and Houston, as well as fishing piers in Kemah, San Leon, Dickinson, Texas City, Galveston and Bolivar.

Parsons works alongside Father Jan Kubisa and Father Carlos de la Torre, as well as Deacon Heath Hampton, Deacon Stan Avelone and Deacon Russ Carroll, who serve at the Port of Houston as chaplains. Father Kubisa and Father Torre offer Mass and confession aboard the ships, and the chaplains and deacons help bless the vessels, offer Communion Services, and distribution of ashes on Ash Wednesday onboard the ships and on the fishing docks.

“Catholics from all over the world sail into our ports and many times have not been at home or near a port on Ash Wednesday,” Parsons said. “I often have seafarers come with tears in their eyes when I am distributing ashes on the ships, because they have not been able to receive them in many years. If you think about it, Ash Wednesday is one day a year, so if your ship is not near a port or you are not home to attend church with your family, you will not receive ashes; we take these things for granted.”

Parsons said the maritime ministry is one of the most ecumenical ministries in the world. The AOS works with a diverse team in the Houston Seafarers Center and Galveston Seafarers Center, including Baptist, Lutheran, Methodist, Episcopal, Presbyterians and other non-denominational chaplains and the Board of Directors, to manage and operate the facilities. They are constantly challenged to work with each other in a common goal to serve all seafarers and fishers.

“For instance, when I had a Sri Lankan seafarer in the hospital after being severely burned in an accident on his vessel in the Gulf of Mexico, I was able to get the Buddhist Community in Houston to come and visit him and bring him foods from his country, as well as give him spiritual support,” said Parsons. “The same happened when we had a Turkish seafarer die of heart failure on board one vessel, I was able to have an Imam perform the prayers necessary to fulfill the Muslim ritual before his body was sent home to Turkey.”

As the Houston-area ports continue to experience tremendous growth, the number of seafarers served by the AOS increases each year. This makes the DSF more critical than ever.

“The DSF has provided four full-time chaplains to serve the massive number of seafarers and fishers that continues to increase each year,” Parsons said. “The funds from the DSF also provide on-going training and local support of our offices in the Seafarers Centers. It is important that the Apostleship of the Sea be included in the DSF to be able to reach out and help the hundreds of thousands of Catholic seafarers sailing the seas so far from home parishes, as well as minister to the non-Catholic seafarers in the name of the Church as part of our evangelization call.”

Parsons said the AOS has been part of her life for 33 years, which is most of her life. She said over the years, she has met thousands of seafarers and fishers from all over the world and has remained in touch through the years.

“When you meet real people from real places with real families, the world becomes a very small place and we become one family,” Parsons said.

One example is the seafarer, Sampath, which Parsons mentioned who was put into the hospital after his hand was badly burned. He had 22 surgeries in three months, and she was there in the hospital by his side before each surgery, afterward in recovery, and the days in between.

“He was young and alone, far from home, and in such great pain, he just wanted to die,” said Parsons. “I spent hours sitting with him, watching and discussing the History Channel, a science show or Tom and Jerry cartoons to try and take his mind off the pain and to laugh a little. He made it through this very difficult time in his life, which may have ended his career on the ships, but now he is trained in computer science with a job in Sri Lanka and is married with two beautiful children.”

Parsons said they still keep in touch, especially on Christmas when Sampath always says, “You are my sister. I will never forget how you sat with me day after day to help me through the pain.”