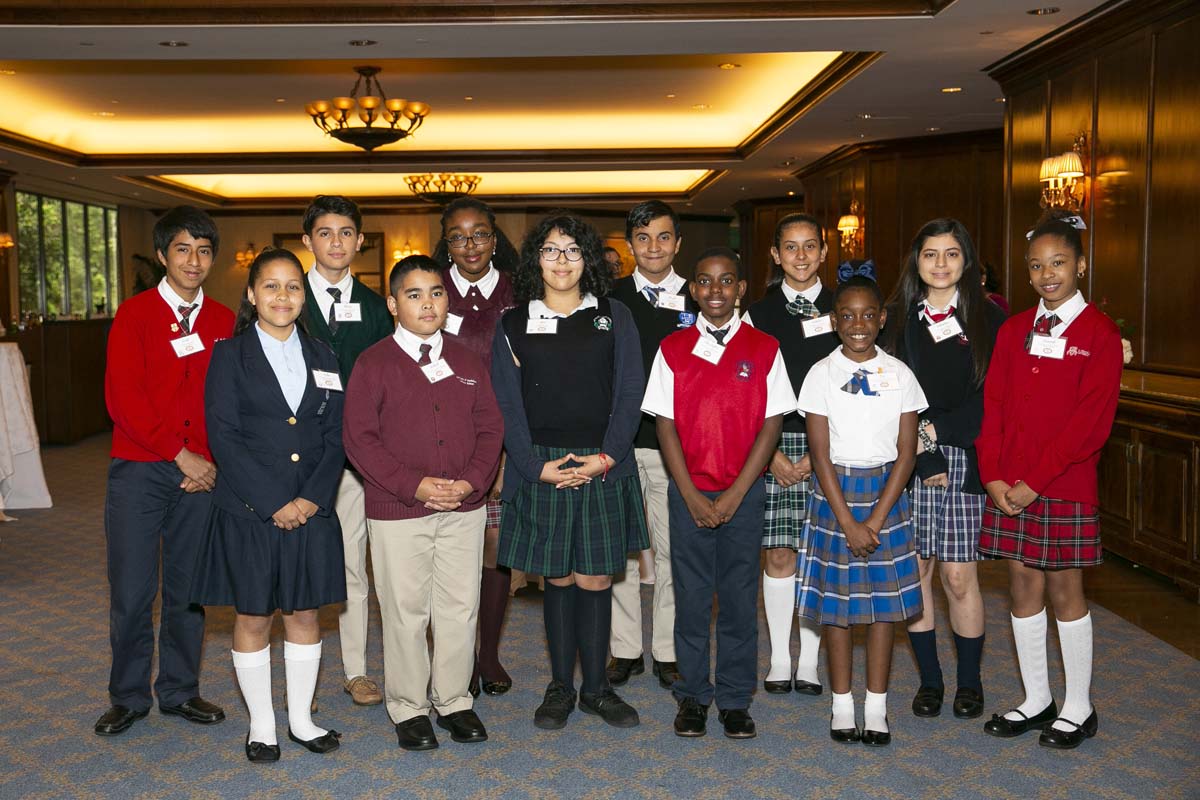 HOUSTON — The Cardinal’s Circle members were recognized for their passion, commitment and generosity to Inner City Catholic School (ICCS) students and families at the annual Mass and Dinner of Thanksgiving on April 30.

“Your generosity is absolutely important to the success of these schools,” Cardinal DiNardo said. “These (ICCS) schools continue to be a cornerstone in their communities and you are helping them flourish and allowing their children to grow into their Catholic faith.”

Tim Heller, local meteorologist and the dinner emcee, recognized all of the ICCS principals before introducing Haney.

“We truly could not do what we do without your generous support,” Haney said to The Cardinal’s Circle members. “So thank you from the bottom of our hearts for your sacrifices that you make in order to be such good philanthropists for us. We’re excited about what our schools accomplished last year. We’re also excited about their vision and their pastors’ visions for the schools (looking ahead).”

Listening to principals and pastors, Haney said the Catholic schools in the Archdiocese have identified numerous initiatives such as STEAM, bilingual education and servicing the needs of exceptional learners as areas to grow in expertise.

“We have sought out their input about what will help them grow as schools, and what our Catholic Schools Office can do to help them thrive,” Haney said, “all the while ensuring that they are integrating Catholic identity and Catholicizing in the curriculum across all of the content areas.”

Tom Macrini, a founding member of The Cardinal’s Circle and current committee member, introduced the evening’s student speaker Victoria Haddad. An Our Lady of Guadalupe Catholic School graduate, Haddad had spoken at the dinner four years ago as a senior at Incarnate Word Academy. She will be graduating from the University of St. Thomas this spring.

“Four years ago, I was unaware of exactly what God was doing in my life,” she said. “Those years (since) have been some of the most instructional of my life so far. I stand before you today with a message similar to the one that I had then, but now with a wealth of experiences made possible by people like you.”

Haddad said the Our Lady of Guadalupe Catholic School community was very supportive of her family as her mother was recovering from life-threatening health issues.

“As you can imagine, the pain and confusion seemed insurmountable at times, but in the midst of this experience, we found the grace of God time and time again,” Haddad said. “One of many ways was through our school community at Our Lady of Guadalupe — through the financial aid they provided with your support to offset some of the costs and through the relationships that my family and I had developed.”

Haddad reminded The Cardinal’s Circle members that they produce positive results in the lives of people that they may never meet, dealing with circumstances they may not even perceive.

“You see, the reality is that we don’t simply need more doctors, lawyers and policymakers. We need more good people,” she said. “We need students with the drive, the knowledge and the backing to be able to fulfill the responsibilities on them to make a difference like the ones that you all are making.”

Haddad said The Cardinal’s Circle helps students become the “best versions of themselves” by giving them an opportunity to succeed.

“There is no place better than our Inner City Catholic Schools to begin that journey,” she said. “You have left an impact on this world that will touch many lives outside of your own.”

In his closing remarks, Archbishop Fiorenza commented that next year will be the 10th anniversary of The Cardinal’s Circle.

“We need to enlarge ‘The Circle,’ to get more and more people to be a part of this,” he said. “This is truly an Archdiocesan effort to support our Inner City Catholic Schools.”