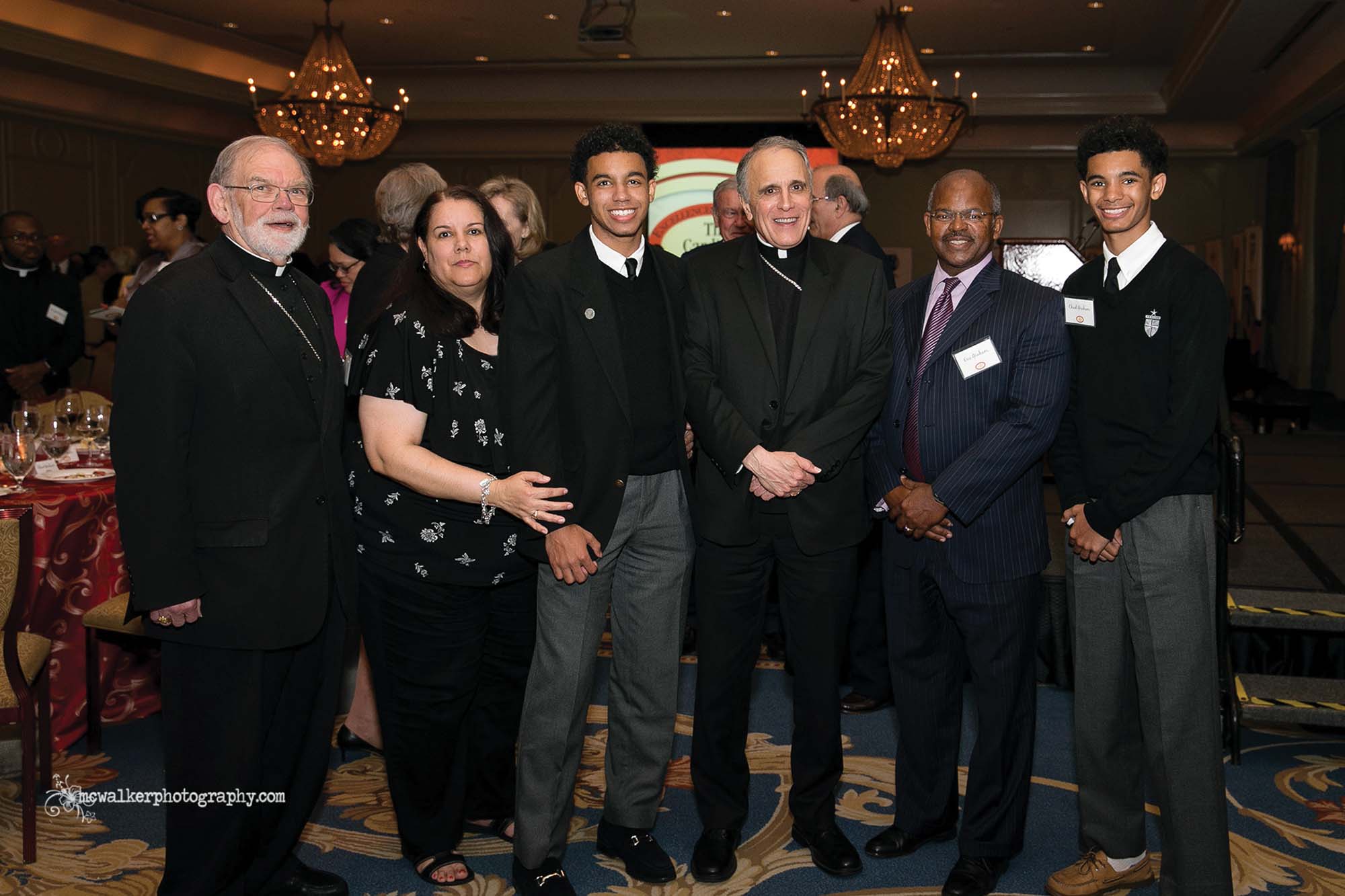 Cody Graham, third from left, is seen with his family, including parents Lynn and Eric Graham and brother Chad Graham, and Daniel Cardinal DiNardo, Auxiliary Bishop George A. Sheltz at a March 30 Dinner of Thanksgiving in Houston. Photo courtesy of Meliezza Walker.

HOUSTON — Now a senior at St. Pius X High School, Cody Graham continues to have a strong affinity for St. Peter the Apostle Catholic School, which he attended previously.

“I created friendships I still hold close to me today and learned the importance of having a family away from home,” he said of the Inner City Catholic School. “All of the kids, faculty and parents were very supportive at all of the school events. St. Peter is truly a family-oriented environment.”

Graham shared his story during a March 30 Dinner of Thanksgiving for The Cardinal’s Circle supporters. Members of The Cardinal’s Circle invest in the lives of Inner City Catholic Schools’ students through an annual commitment of $5,000. Contributions support the needs of each school from tuition assistance to investment in technology, curriculum and quality teachers. St. Peter the Apostle Catholic School is one of 13 Inner City Catholic Schools in the Archdiocese of Galveston-Houston.

Tom Macrini, one of the founding members of The Cardinal’s Circle, introduced Graham at the dinner.

“I feel a tremendous amount of pride in seeing what these kids have become as they have grown up, with us being a small part of their success,” he said.

Graham currently boasts a 3.9 GPA and a slew of extra-curricular activities under his name. He has been accepted into 35 universities and received more than $1 million in scholarship opportunities. An all-state selection in basketball, he is also looking to continue his athletic career on the collegiate level.

“A Catholic education is the best education a child can get,” Graham said. “It gives one an opportunity to strive for academic success, but also pushes them spiritually.”

During her “State of the Schools” address at the dinner, Dr. Julie Vogel, superintendent of Catholic Schools for the Archdiocese, relayed accounts of her interactions from both students and parents in recent years. She read correspondence from some of these individuals, each offering overflowing and profound gratitude for receiving the gift of a Catholic school education.

“While we are always striving to improve and advance the whole Inner City Catholic Schools group, it’s the individual stories that exemplify why we treasure our Inner City Catholic Schools,” Vogel said. “I pray that you see every day in our students — the next generation of men and women for others, using their God-given gifts and talents, developed in our schools, to make the world a better place for all of us.”

“When you give to our Inner City Catholic Schools, you are investing in young men and women and the people who are committed to educating them.”

At the dinner, Graham spoke about an accident several years ago that severely injured his older brother Max. Graham recalls how the St. Peter the Apostle community supported his family through this challenging time.

“With the help of great doctors, prayer and countless number of therapy sessions, Max was walking again in less than a year,” Graham said. “There is something to be said for the power of prayer. Ever since that moment, I have known St. Peter would always be my home and I wanted nothing less than that from a high school and that is what Pius has given me.”

Graham said he recognizes that all children do not have these opportunities and thanked The Cardinal’s Circle members for “granting many families (their) wishes and giving them the financial support necessary to attain and a great, well-rounded education.”