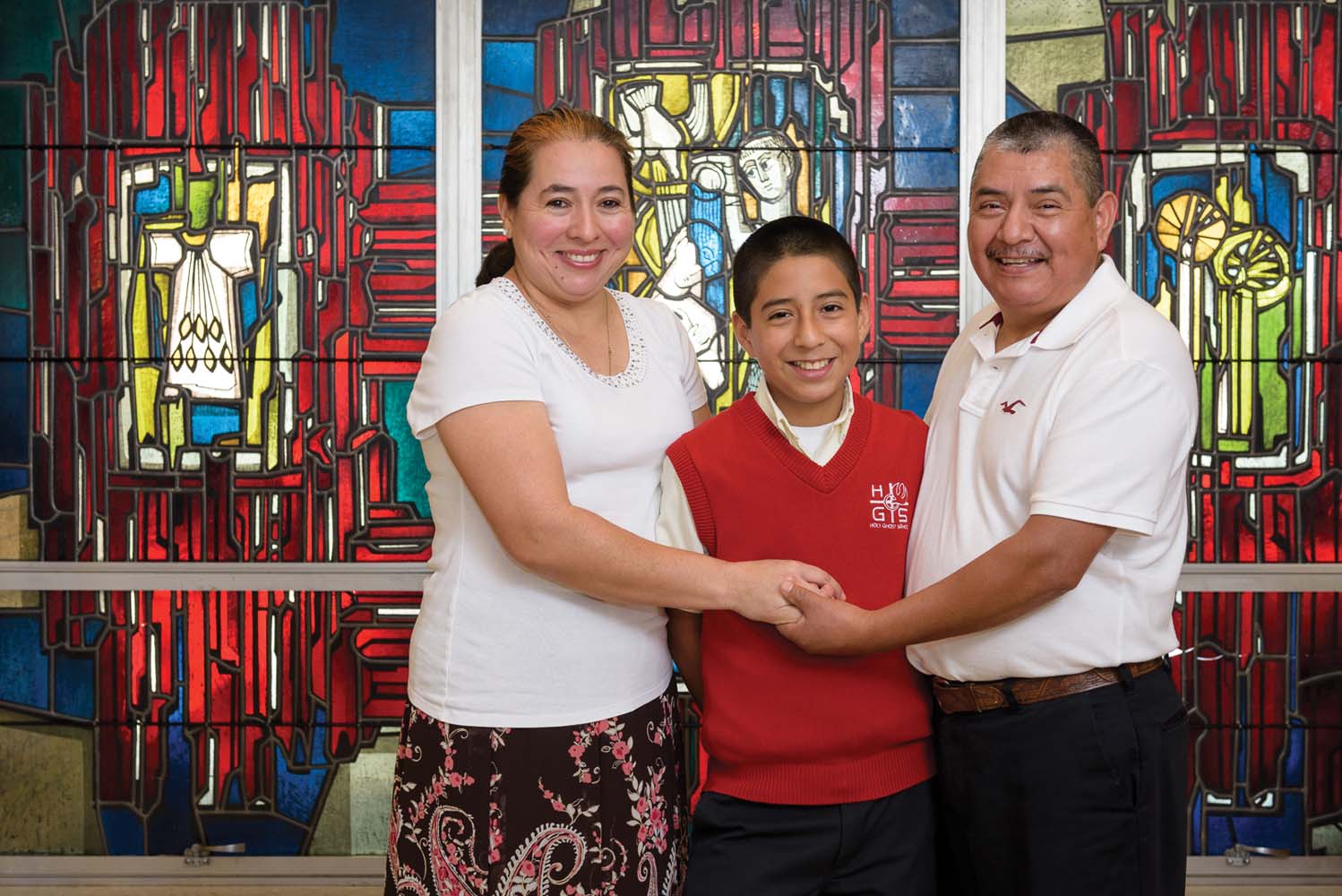 Juan and Evelyn Evangelista are able to send their 11-year-old son Erick to Holy Ghost Catholic School in Houston because of the support from The Cardinal’s Circle. Photo by Office of Development.

HOUSTON — Founded in 2010, the mission of The Cardinal’s Circle is to help Inner City Catholic Schools maintain a standard of academic excellence in curriculum and staff. The Cardinal’s Circle also helps the 13 schools provide tuition assistance required by a large portion of their student population.

“The operational needs of our Inner City Catholic Schools are extensive and ongoing,” Daniel Cardinal DiNardo said. “Members of The Cardinal’s Circle play a vital role in ensuring that students who attend these schools are given the best Catholic education possible.”

Burt and Allyson Martin have been members of The Cardinal’s Circle for five years.

“We became members because we believe that it is our responsibility to provide financial support for students, families and schools who do not have the necessary resources,” Burt Martin said. “It is a way for us to join with others in our Archdiocese, so that together, we all can make a meaningful difference in the lives of children and families in the Houston area.”

Through an annual contribution of $5,000, The Cardinal’s Circle members invest in the lives of students at the Inner City Catholic Schools, which provide opportunities for urban children and their families faced with incredible financial challenges.

Juan Evangelista knew his children needed to attend a Catholic school. Although it was a financial challenge, he sent his daughters Stefany, 19, and Natalie, 16, to Holy Ghost School in Houston. His 11-year-old son Erick is currently a student at the school.

Juan is a cook at Rice University and his wife Evelyn is a housekeeper. They were married at Holy Ghost 21 years ago. Faith and family are the most important aspect of their lives. They closely watch their expenses to enable them to pay what they could for school tuition.

“I wanted my children to attend Catholic schools for the spiritual values, to learn respect for God and to follow Jesus,” Juan Evangelista said.
Stefany graduated from Cristo Rey Jesuit and is now attending Texas State University. Natalie is a student at Cristo Rey and Erik is entering the seventh grade at Holy Ghost this fall and has been recognized by the Duke Talent Identification Program.

“Catholic schools are unique environments where we have the ability to form the whole child — academically, physically and most importantly, spiritually,” said Christina Mendez, Holy Ghost principal. “Our goal is to help every child to discover their unique gifts and talents given to them by God to serve others. We are able to walk hand-in-hand with parents to support them in their role as primary educators of their children. By helping our students to discover their gifts and talents we are able to help them understand that God gave them these talents to serve others in the community.”

“We believe that Catholic education is vital to providing a stronger moral, religious and academic foundation to our youth and ultimately, our future generations,” Martin said. “As Pope Francis said, Catholic education ‘gives them a solid basis on which to build their lives.’ The opportunity to have a Catholic education is not a privilege reserved for a few but should be available to all who seek it.”
Martin said it is an honor to support The Cardinal’s Circle.

By joining The Cardinal’s Circle, members have the ability to make a life-changing impact on countless children and families, Mendez said.

“Students who would not otherwise be able to afford to come to Catholic school are supported by these gifts,” she said. “Holy Ghost and other Inner City Catholic Schools support those who are poor and often marginalized in society — the very people Jesus called us to serve. In becoming a part of The Cardinal’s Circle, (members) join us in our mission to serve our students and community, bringing the joy of the Gospel into the world.”