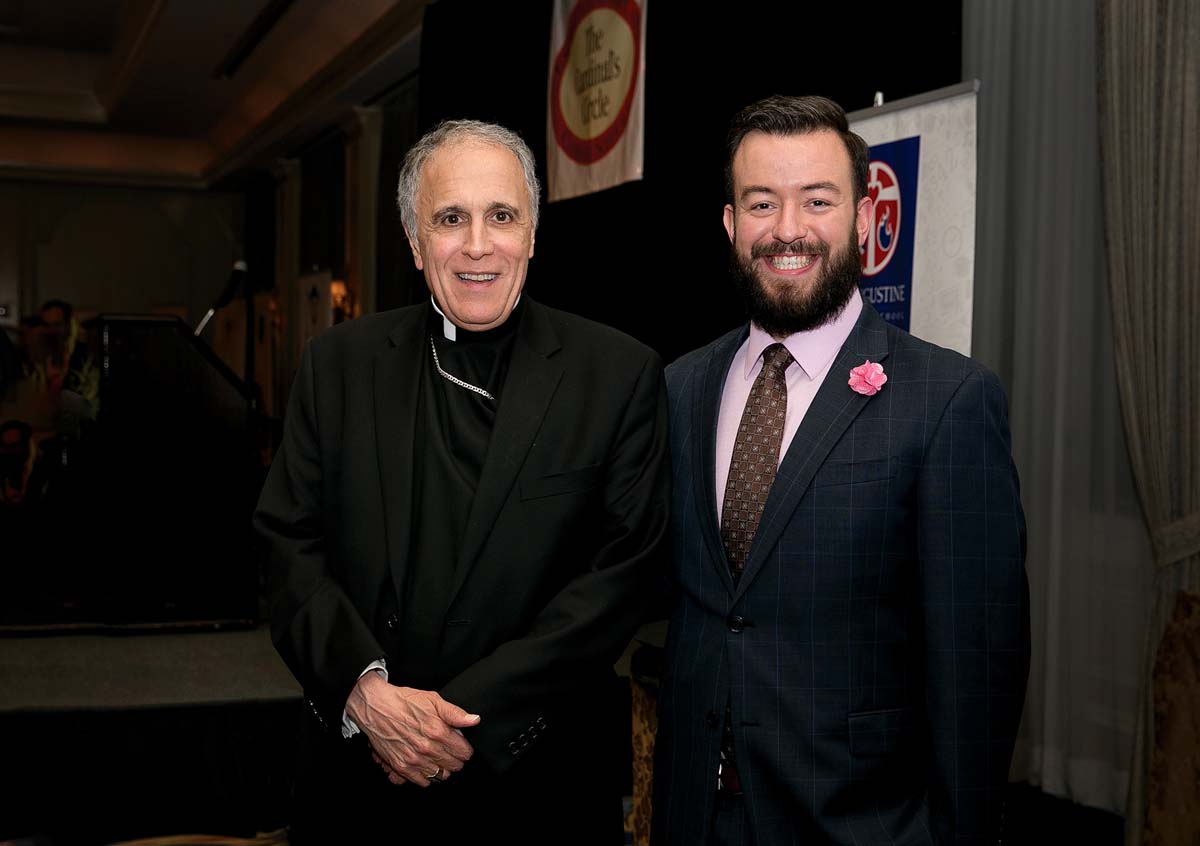 Daniel Cardinal DiNardo visits with Mathew Mendoza, an alumnus of St. Pius V School in Pasadena, during the Cardinal’s Circle Dinner of Thanksgiving, April 19. The Cardinal’s Circle supports tuition assistance and school improvements for Inner City Catholic Schools in Galveston-Houston. photo By the Office of Development.

HOUSTON — Members of The Cardinal’s Circle were recognized for “nourishing the seeds” of education for Inner City Catholic School (ICCS) students and families at the annual Mass and Dinner of Thanksgiving on April 19.

Shortly before the dinner, students from Assumption Catholic School shared a special message of appreciation to Cardinal DiNardo and members of The Cardinal’s Circle.

“(The Inner City Catholic Schools) are very close to my heart, as they are to my predecessor,” Archbishop Emeritus Joseph A. Fiorenza, Cardinal DiNardo said. The cardinal recalled a conversation he had with Archbishop Fiorenza when he arrived in Galveston-Houston in 2004.
“He said to me, ‘I don’t want our Catholic schools to only be for the wealthy. I want us to be able to draw and attract students and get them help so they can stay in these schools,’” Cardinal DiNardo said. “(Archbishop Fiorenza) was particularly concerned about the Inner City schools. I’m totally in agreement with him, we must be attentive to Inner City Catholic Schools.”

All of the dinner guests received seed packets from individual ICCS students with a note thanking the members for “planting the seeds” that are helping them grow.

“We are most fortunate to have a Cardinal and Catholic community that wants to see Catholic schools thrive and bloom,” Haney said in her “State of the Schools” address. “And we are truly thankful to have administrators, leaders and teachers as well as parents and students that are willing to think outside the box. It is going to take every person to help us pull the weeds in our garden so that our flowers can bloom and grow.”

She went on to thank members for “allowing us to nourish the seeds of education for our students in our Inner City Catholic Schools.”

Before enrolling at South Texas in 2014, Mendoza had graduated from St. Thomas High School in Houston and University of Houston. Mendoza credits his “parents’ zeal” and the generosity of The Cardinal’s Circle members for being with him during his educational journey.

“No matter what roadblock I have faced throughout my life, I would have been lost without God’s direction,” he said. “But we are all here in this room at this very moment through God’s grace. Thank you for establishing scholarships for individuals like myself so that we may continue our Catholic education.”

He closed with a quote from Barbara Bush, the former First Lady and Houstonian who died only days prior to The Cardinal’s Circle event.

“Giving frees us from the familiar territory of our own needs by opening our mind to the unexplained worlds occupied by the needs of others.”

By taking on those needs, “the harvest is coming in from those first seeds planted eight years ago” through The Cardinal’s Circle, according to Christina Mendez, principal of Holy Ghost Catholic School.

“While the work can be challenging, I promise it is so rewarding,” she said. “Together, we have done great things and imagine the greater harvests to come in the future.”

During his closing remarks prior to the benediction, Bishop Sheltz highlighted the important work of the Cardinal’s Circle by sharing his own testimony of being a proud local product of an Inner City Catholic School education.

“I know my mother and dad sacrificed a great deal to send three kids to school,” he said. Bishop Sheltz said his participation in The Cardinal’s Circle was “a thank you to mom and dad for making the sacrifices they made to get me a good Catholic education. I’m a proud member of this organization and I make that sacrifice every year because I want to see other young people, like Mathew, have that ability to succeed and grow and be good witnesses of God’s love in this world of ours.”