The bright lights of the Filipino faith 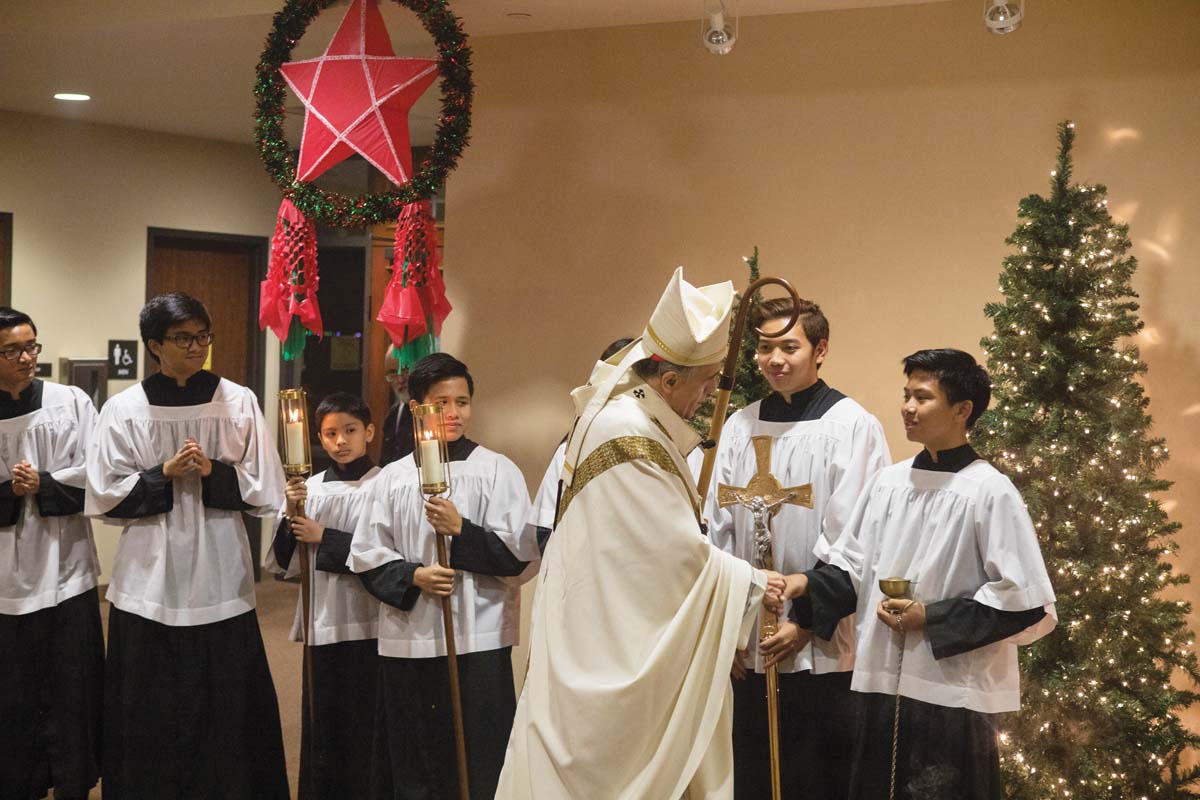 Daniel Cardinal DiNardo greets an altar server during a past Simbang Gabi culmination Mass. This year’s celebration of the Simbang Gabi, a beloved tradition of Filipino Catholics, coincides with the 500th anniversary of the arrival of Christianity to the Philippines. Filipino Catholics around the Archdiocese are celebrating the milestone anniversary with special Masses and devotions. (File photo by James Ramos/Herald)

HOUSTON — Filipino Catholics in the Galveston-Houston area gathered for a series of special Masses to celebrate a 500-year journey of faith that continues.

The first of seven Masses was celebrated at Notre Dame Parish in Alief on Sept. 25. Roughly a month later, Sts. Simon and Jude Parish in the Woodlands hosted a Mass on Oct. 29, followed by Prince of Peace Parish in Houston on Nov. 16.

These Masses commemorate five centuries of Christianity in the Philippines, uniting the Filipino Catholic community in the Archdiocese.

The Sept. 25 Mass opened the series of celebrations. Sept. 25 is also on the feast of St. Lorenzo Ruíz, the first martyr and saint from the Philippines.

St. Ruíz was martyred with missionaries in Japan in 1637 after he refused to renounce his faith. Canonized 300 years later, he is venerated as a patron saint of the Philippines, youth and altar servers, and for people working overseas.

At the Mass, some women wore native silk dresses in pastel colors with delicate stitching, and some men wore traditional barong tagalog, which are embroidered long-sleeved shirts usually made of pineapple or banana plant fibers or other organic materials.

During the Mass, a statue of St. Ruíz, surrounded by floral greenery and bright yellow sunflowers, was placed at the front of the sanctuary. The Mass was celebrated by Archbishop Emeritus Joseph A. Fiorenza.

The liturgical celebration was part of jubilee year events commemorating the first Mass in the Philippines, which was celebrated on Easter, March 31, 1521, by a Spanish priest accompanying the voyage of Ferdinand Magellan.

The explorer died after engaging in a tribal battle there, but the expedition, which began with five ships and 260 men, eventually accomplished the first circumnavigation of the globe. Eighteen surviving crew members arrived in Spain on one remaining ship loaded with spices in September 1522.

The Christian faith has blossomed in the Philippines in the last five centuries. The Philippines today has the third-largest Catholic population in the world, with about 86% of the country’s 110 million inhabitants professing the faith.

More than 10 million Filipino migrants, most of them Catholic, live in 100 countries. A recent survey estimates that 4.2 million Filipinos live in the U.S., about 18% of the Asian U.S. population, with about 2.9 million being Catholic. Archdiocesan reports estimate there are approximately 50,000 Filipino Catholics worshiping within the Archdiocese, a number that has likely grown.

The next Mass will be the Culmination Simbang Gabi Mass, which is set for 6:30 p.m. on Dec. 23, at St. Bartholomew Parish, located 5356 11th St. in Katy. Daniel Cardinal DiNardo will celebrate the Mass.

Simbang Gabi begins on Dec. 15, when some of the Filipino Catholics in the Archdiocese start the beloved Filipino Christmas tradition that consists of a novena of Masses held in anticipation of the Nativity and to honor the Blessed Virgin Mary.

In the Philippines, Simbang Gabi (“Mass at Dawn”) Masses are traditionally held in the early hours of the morning, but in Houston, the Masses are celebrated at night to allow more faithful to attend.

This year, at least 29 parishes from Conroe to La Marque are hosting a Simbang Gabi Mass, with three parishes hosting daily Masses during the entirety of the novena, beginning on Dec. 15.

Joy of the Gospel

In April 2021, as bishops across the Philippines opened holy doors at cathedrals to help launch the anniversary year, Pope Francis encouraged Filipino Catholics to “be grateful for the gift of faith” and called them to “reach out to others and bring them the hope and joy of the Gospel.”

Filipino cardinal, Luis Cardinal Tagle, prefect of the Vatican Congregation for the Evangelization of Peoples and former archbishop of Manila, praised the “hidden simple witnesses to the faith” for five centuries that have contributed to “our character as Filipinos, to the betterment of the Filipino culture and to the formation of the Filipino nation.”