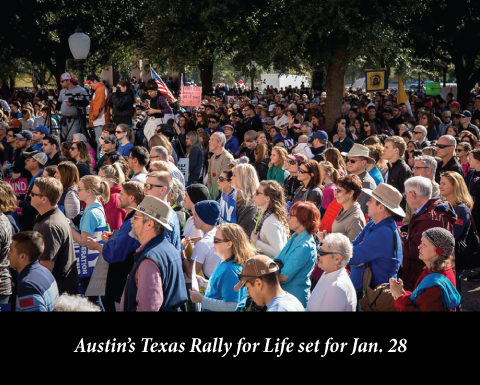 More than 500 people from the Archdiocese are expected to travel to Austin on Jan. 28 to participate in the Texas Rally for Life march and rally at the State Capitol in Austin. Courtesy photo.

AUSTIN — The 2017 Texas Rally for Life will be held on Saturday, Jan. 28, on the south steps of the Capitol in Austin.

The Texas Rally for Life will commemorate the 44th anniversary of the tragic Roe v. Wade Supreme Court decision in 1973, which made abortion legal throughout all nine months of pregnancy. In the wake of Roe, legal abortion in the nation has claimed the lives of more than 57 million unborn children and has hurt countless women and men.

About 500 people are expected to travel to the capital via buses from the Archdiocese.

“It is important that we as Catholics and people of faith continue commemorating the anniversary of Roe v. Wade, which created a ‘right’ to abortion in the U.S.,” Julie Fritsch, director of the Office of Pro-Life Activities, said. “Many can’t recall a time when abortion on demand was not standard in this country and the practice can seem commonplace and just another part of life. The Texas Rally for Life and the March for Life in Washington, D.C. are just one of many ways for us to come together and offer peaceful witness in support of all life (including not just the unborn, but the sick, the poor, the incarcerated and the immigrant) and against a culture of death.”