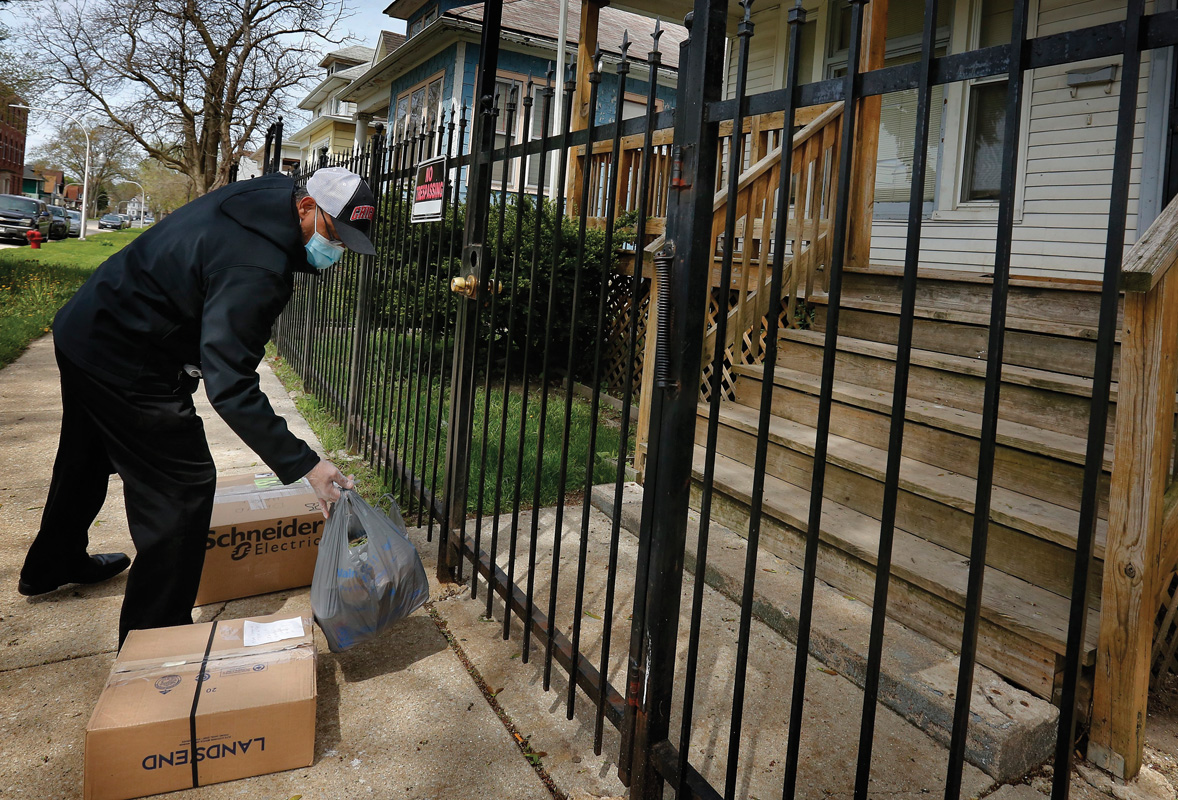 Chicago Deacon Pablo Perez of Kolbe House drops off donations at a halfway house for men recently released from jail May 4. In Houston, ministry leaders said the pandemic has seriously affected the way they minister to the recently imprisoned. (CNS photo)

HOUSTON — Many impacted by pandemic restrictions may feel imprisoned, but Texas prisons and halfway houses are truly locked down as COVID-19-related deaths have risen to 166 inmates and 21 employees, including guards and chaplains, according to a Texas Department of Criminal Justice report updated Oct. 27.

Those deaths were out of the 23,362 inmates and 5,438 TDCJ staff who have tested positive for COVID, stated the TDCJ website update. More than two-thirds of inmates who died from COVID-19 complications have been black or Hispanic, although the general inmate population is almost evenly divided between a third of each of those minorities and a third of white inmates, news outlets reported.

The Archdiocese of Galveston-Houston Correctional Ministries, which usually provides Masses, occasional weekend spiritual retreats and gifts to prisoners, have been locked out for the past several months with no volunteers allowed for the foreseeable future, including Christmas holidays.

“Morale and spirits behind the walls are low, and there is not much we can do for them with the COVID restrictions. There are no Masses, no services or Bible study,” said Deacon Alvin Lovelady, director of the Archdiocese’s Correctional Ministries.

“There are still some units that are in total or semi-lockdown, which means no moving around 23 hours a day or no more than 5 to 10 gathered in one location,” he said.
Pre-recorded Masses were given to the Texas Department of Criminal Justice to distribute to prisons around the state.

“We’re trying to minister in other ways, but since prisoners cannot get on the internet, we can’t even do Zoom-type seminars. And the only way we can provide them with books is if we order them straight from the publisher to send to the prisons,” Deacon Lovelady said.

That is how the “Let Us Celebrate” missalettes are still arriving to inmates, he said.

“We also just received approval to give copies of a daily devotional ‘Do Something Beautiful for God’ by Mother Teresa that has an introduction by Matthew Kelly,” he said.
That may be one of the few Christmas gifts that come into prisons, which won’t even be visited by caroling groups this year, he said.

But halfway houses in Houston are still receiving up to half-dozen released inmates a week after they quarantine for two weeks in an isolated part of the prison, Deacon Lovelady said. After 14 days in quarantine, they are given “exit training” to prepare for their halfway houses.

At that time before COVID testing, several residents and staff did come down with fever, aches and coughs, he said, but everyone recovered. Since then, residents are all required to wash their hands frequently, have their temperatures tested, and are supplied with sanitizer.

Van Derbur said donations of clothing, bedding such as sheets and pillowcases, and gift cards would help the residents start a new life. Donations can be directed by calling 281-442-7200.

“Thanks to all those who donate for thinking of us. If we don’t need a particular item, we share with other houses that may need it more,” he said.