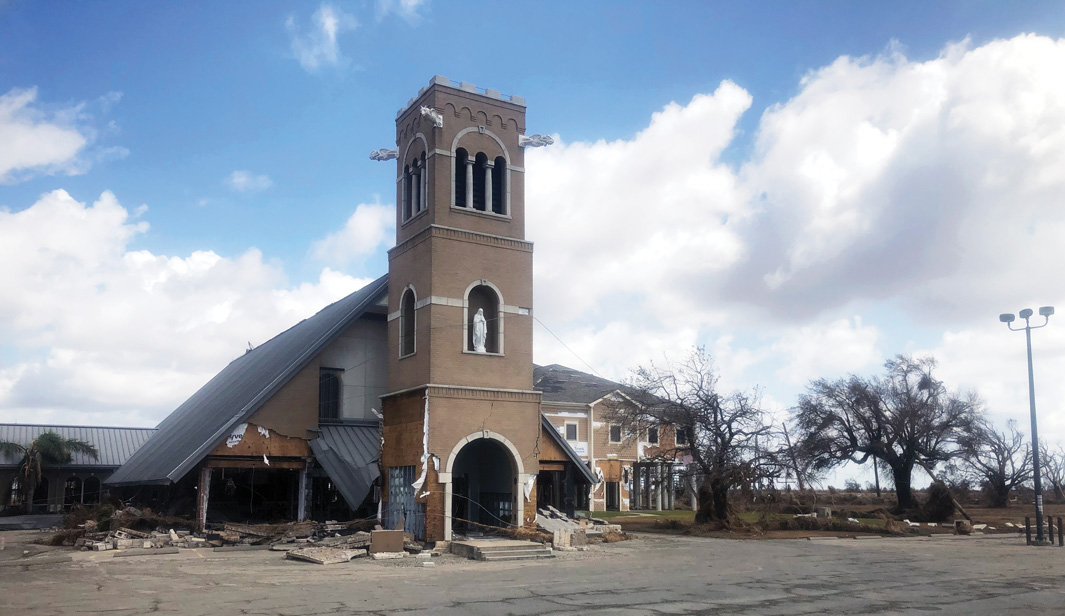 Above, Sacred Heart parish in Creole saw catastrophic damage from wind and storm surge. Below, David Gobea (second from right, bottom row) traveled with St. John Vianney Catholic Church parishioners to Cameron, Louisiana, to assist with Hurricane Laura relief efforts. Immediately after the storm, Gobea and other parishioners would travel from west Houston to Louisiana to bring supplies, food and relief work to the people of southwest Louisiana. (Photos courtesy of David Gobea)

HOUSTON — Just as the Cajun Navy fearlessly came to Texas’s aid during the floods of Hurricane Harvey, Houstonians didn’t wait to head to Lake Charles bring supplies in the catastrophic wake of Hurricane Laura.

One day after Laura lashed Lake Charles, St. John Vianney Catholic Church parishioners David and Maria Gobea, alongside Juaquin and Natalie Arellano, trekked through the wreckage of downed trees, utility poles and debris to Lake Charles with fresh food and supplies. That weekend they’d provide at least 200 meals for families, as well as other aid workers passing through.

Gobea said Lake Charles was a ghost town, as most had evacuated and still had yet to return. Few residents were seen on most roads.

During one meal delivery, Maria visited a homeowner and found him breaking down in tears. She didn’t know what to do except pray and grieve with him for the loss of his home, his family’s way of life now shattered by Laura, and his sense of normalcy already splintered by a pandemic.

“It was heart breaking to see these people’s homes just blown wide open by the wind. They had lost everything,” Gobea said. 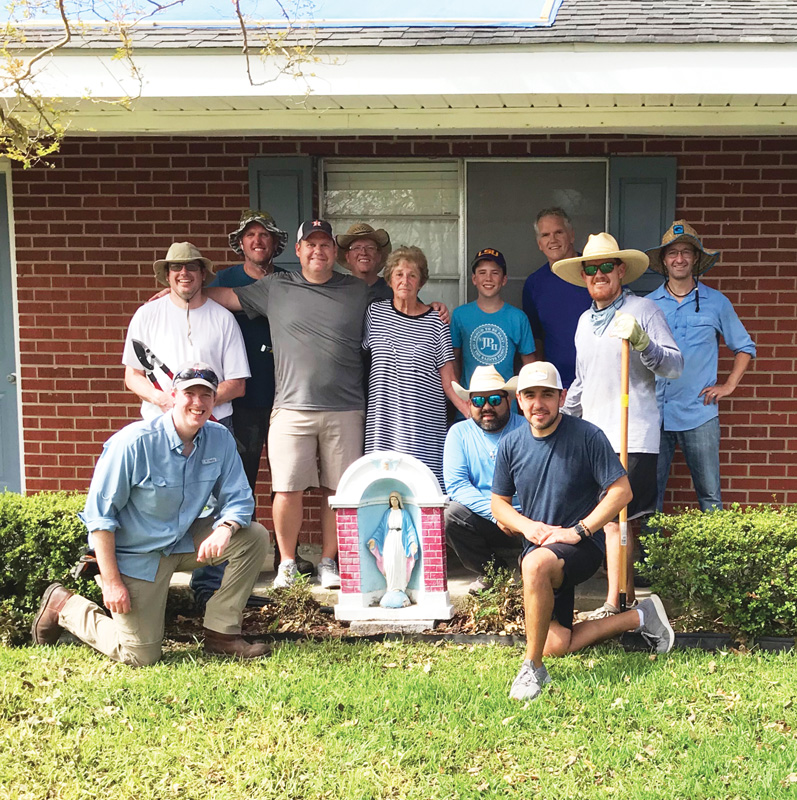 A fellow SJV parishioner with family in Lake Charles helped coordinate food supply deliveries that trip. For the next two weeks, parishioners would make the journey to help with clean up efforts, food and supplies in Cameron, Dequincy and several other cities along the way, helping wherever needed.

Among the diverse crews, some of whom came from SJV’s Spanish-speaking community, several parishioners knew a hurricane’s wrath firsthand, having seen four feet of water in their own homes. Though his home was spared any flooding, Gobea himself had to be rescued by boat from his home as waters rose.

Contacts learned of a young family in Sulphur in need of baby supplies after losing everything, and parishioners back in Houston rallied to gather everything the family might need to get by for the next few weeks.

“It’s really heartbreaking to see the national coverage of the storm die down,” Gobea said. More than 44,000 homes remained without power Sept. 15, three weeks after the storm.

In Cameron, a small community less than a mile from the Gulf of Mexico where a Category 4 Laura made landfall, Gobea and the crew put their two chainsaws to good use in helping a widow clear debris from her property. Though much catastrophic damage surrounded the home, she survived with little roof damage and a statue of the Blessed Virgin Mary still standing despite the 150 mph wind gusts and storm surge.

At one point, Gobea asked her, "What do you want us to do with these trees?"

"Take it down. That's what my husband would do if he were here," she replied.

Gobea said that conversation was a powerful moment of realization. Her husband wasn't there anymore, but they could be there for her and serve her in that way. Much of her husband's equipment still worked, like his tractor that they used to clear debris.

Less than 10 miles down the road in Creole, also right on the Gulf, Gobea saw complete destruction. A nine-foot storm surge spread from Creole to Cameron, wiping out dozens of homes and structures. Thirty-nine parishes and seven missions in the Lake Charles diocese that saw damage, at least six saw catastrophic damage, including Sacred Heart parish in Creole.

“It was completely wiped out, and there was nothing we could do because there were no more homes left to repair,” he said.

After helping out along the coastal communities, the crew returned to the Catholic Charities hub in Lake Charles to see how else they could help.

There they ran into Sister Miriam MacLean, RSM, director of Catholic Charities of Southwest Louisiana, which has coordinated much of the relief in Lake Charles. The group of sisters were locked out from their van, so Gobea's crew gave them a ride back home to their convent. The sisters still had supplies from that day needing distribution, and Gobea and the SJV group had shown up just in time to help hand out the rest of the supplies.

With these goods in hand, they traveled up and down Lakes Charles' streets, handing out supplies to anyone who needed any gasoline cans, water, tarps and the like.

The Lake Charles residents would ask: "Who are you guys?"

Humbly, Gobea replied: "We're just some guys from Houston that went through Harvey and we're here to return the favor."

The Lake Charles community has ties to SJV, especially in its popular ACTS community. A crew of teens from Lake Charles helped commission the youth version of the retreat and community at the Houston parish several years ago, so it only made sense for Gobea and his fellow ACTS retreat participants to help their brothers and sisters after Laura.

Throughout his time in Louisiana, Gobea found a resilient spirit in the people he encountered. He also saw dozens of handmade wooden crosses with the message “ALL IS WELL,” a city-wide effort to share a message of hope during the onset of the pandemic in the spring. But these crosses still stood tall next to fallen trees and battered homes.
Another icon of Louisiana is the ever-popular statue of the Blessed Mother in front of many Catholic homes in Cajun country.

“We felt the presence of Mary in Louisiana,” Gobea said. In Creole, where they found Sacred Heart parish destroyed, a statue of Our Lady, just like the hundreds across the region, still remained upright just like the crosses.

On a trip back home to Houston, Gobea’s crew made an unscheduled pit stop in Fannett, Texas, near Beaumont.

There, where three years ago Hurricane Harvey had wrecked the little community with three to four feet of rain, David Wedlake found a Miraculous Medal on the ground.

Catholic Charities of the Archdiocese of Galveston-Houston is still coordinating with their sister agencies in southeast Texas and Louisiana. Catholic Charities in Houston continued to accept donations of water that would be sent to Louisiana. Water can be donated at the Catholic Charities warehouse, located at 1000 S. Loop West, Ste. 150 in Houston, from 9 a.m. to 1 p.m. Monday to Friday. For assistance, volunteer and donation information, call 713-526-4611.

No stranger to storm relief, a large network of Knights of Columbus of Galveston-Houston brought supplies to Lake Charles in coordination with Catholic Charities of Southwest Louisiana (CCSL) the day after the storm hit. Over the next week, thousands of supplies, including water, food, gas, construction and cleaning goods, were brought to the southeast Texas and Lake Charles-area to help with recovery and relief work.

Members of the Knights of Peter Claver and Ladies Auxiliary from across the Gulf Coast traveled to Lake Charles, Louisiana, on Sept. 12 to deliver supplies to relief efforts. Schools also helped with relief efforts, like St. John XXIII College Preparatory in Katy, which hosted a gift card drive to benefit Laura recovery.

For the latest information on Archdiocesan-led Hurricane Laura relief efforts and other resources to help recovery, visit www.archgh.org/laurarecovery.