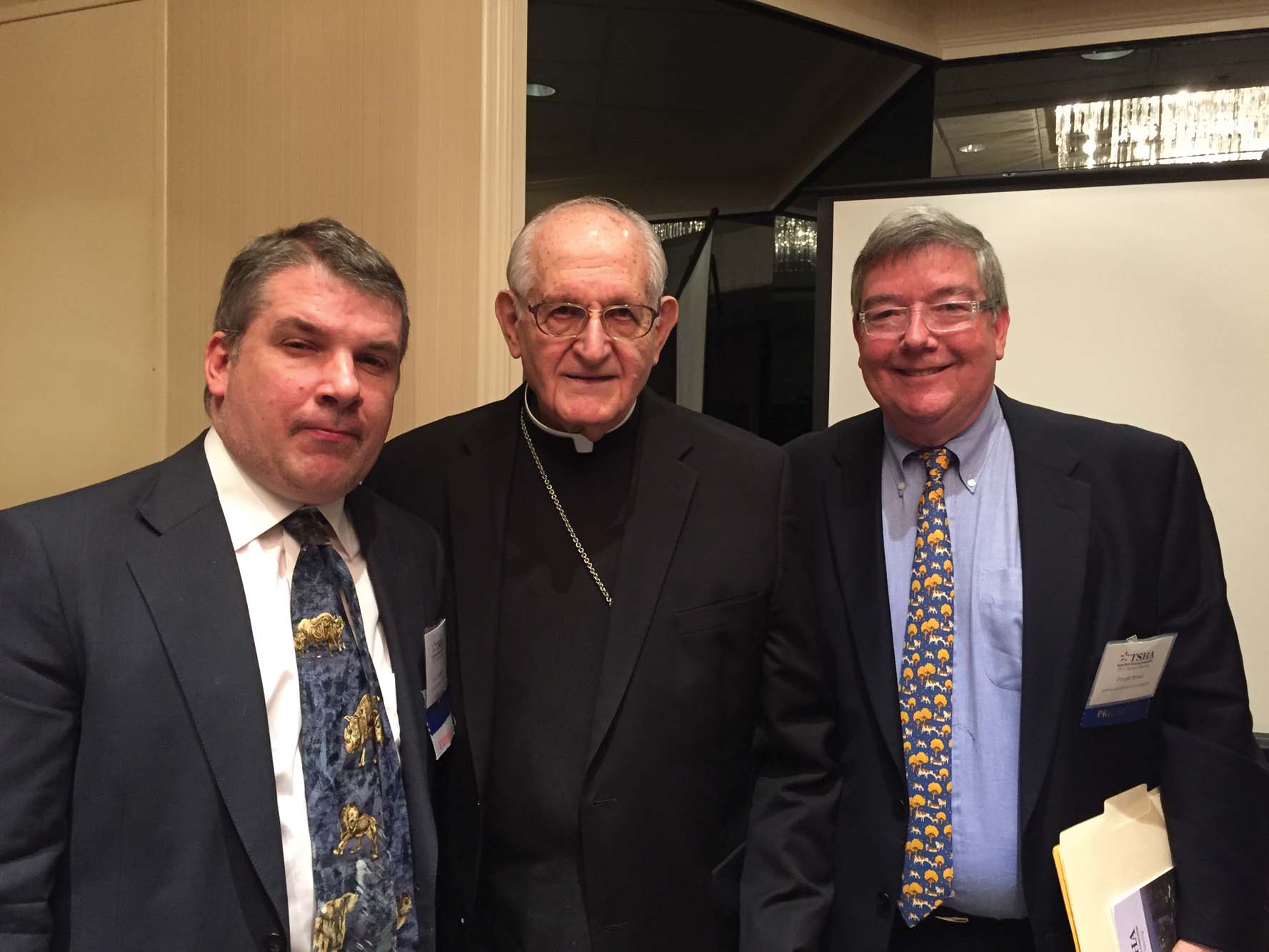 Pictured at the event are Hartmann (left), Archbishop Fiorenza and Rynd. The annual TSHC meeting is the largest gathering of its kind for Texas history enthusiasts. Photo courtesy of Catholic Archives of Texas.

HOUSTON — Honorable Frank Rynd, general counsel at the Archdiocese, and Archbishop Emeritus Joseph A. Fiorenza were speakers at the Texas Catholic Historical Society gathering on March 3.

The Texas State Historical Commission (TSHC) hosted an annual meeting in Houston, March 2 to 4. A joint session with the Texas Catholic Historical Society featured presentations on the theme of “Catholics and Civil Rights in the 20th Century.” Rynd presented “The Road through Selma: The Formation of Three Texas Bishops.” Archbishop Fiorenza, who marched at Selma as a young priest, attended and provided additional commentary about his experiences in Selma.

Rynd considers history his avocation. He said he was lucky to have teachers growing up attending schools in the Archdiocese who supported his hunger for knowledge of the past.

“I am a member of the Texas State Historical Association and on the last day of the 2016 conference I was approached by Marian Barber, director of Catholic Archives in Texas, who asked me to present at the 2017 conference and suggested this as a general topic,” he said.

The Selma to Montgomery marches were three protest marches, held in 1965, organized by activists to demonstrate the desire of African-American citizens to exercise their constitutional right to vote, in defiance of segregationist repression.

“On July 2, 1964, President Lyndon Johnson signed the Civil Right Act of 1964. Incredibly, when 50 African-Americans attempted to register to vote on July 6 of that year, the Dallas County Sheriff, Jim Clark, arrested all of them,” he said. “Three days later, on July 9, Judge James Hare issued a court order forbidding three or more people from gathering if the gathering was sponsored by a civil rights group. His order further forbade more than two people at a time to speak about civil rights or voter registration in Selma... such unthinkable defiance and refusal of elected public officials to uphold and abide by the law led to the marches.”

Violence quickly escalated. In neighboring Perry County, Alabama, a group of Marchers were attacked by Alabama State troopers. An unarmed young African-American male and his mother took refuge in a café, where he was shot and died eight days later. On March 7, approximately 550 marchers gathered to march to the state capitol, Montgomery, Alabama, to ask Governor George Wallace questions about the episode. Alabama troopers charged the demonstrators, attacking them with nightsticks, teargas and charging the crowd on horseback. The attack had worldwide media coverage and became known as “Bloody Sunday.”

“Despite Houston’s essentially conservative political environment, three Catholic priests of the Diocese of Galveston-Houston chose to drive to Selma to participate in the ‘Turnaround Tuesday’ march,” Rynd said. “Archbishop Fiorenza recalls that he really did not have any serious reservations about going. He thought it was the right thing to do.

Archbishop Fiorenza, who was assigned at the Sacred Heart Co-Cathedral at the time, drove over to Selma from Houston along with fellow priests, now-retired Auxiliary Bishop Vincent M. Rizzotto and Bishop Emeritus John E. McCarthy of the Austin Diocese. The group gathered at a small Catholic Hospital in Selma that had been built for African Americans since they were not admitted in any other hospital in the region.

“The nation at that time was quite divided over granting the civil right to vote to African Americans and to others who had been illegally prevented to exercise their right to vote,” Archbishop Fiorenza said. “It was important for those of us who went to Selma to show that we fully supported the efforts of Martin Luther King.”

He said when they were in Selma, he could see the hate in the eyes of the Alabama Police — they did not want them there. Still, he said he felt that the presence of the religious sisters in habits acted to intimidate and prevent the troopers from attacking the marchers on March 9.

Rynd said that, after the ‘Turnaround Tuesday’ March was peacefully concluded, the three Galveston-Houston priests returned to Houston, but all three continued their work for justice and equality.