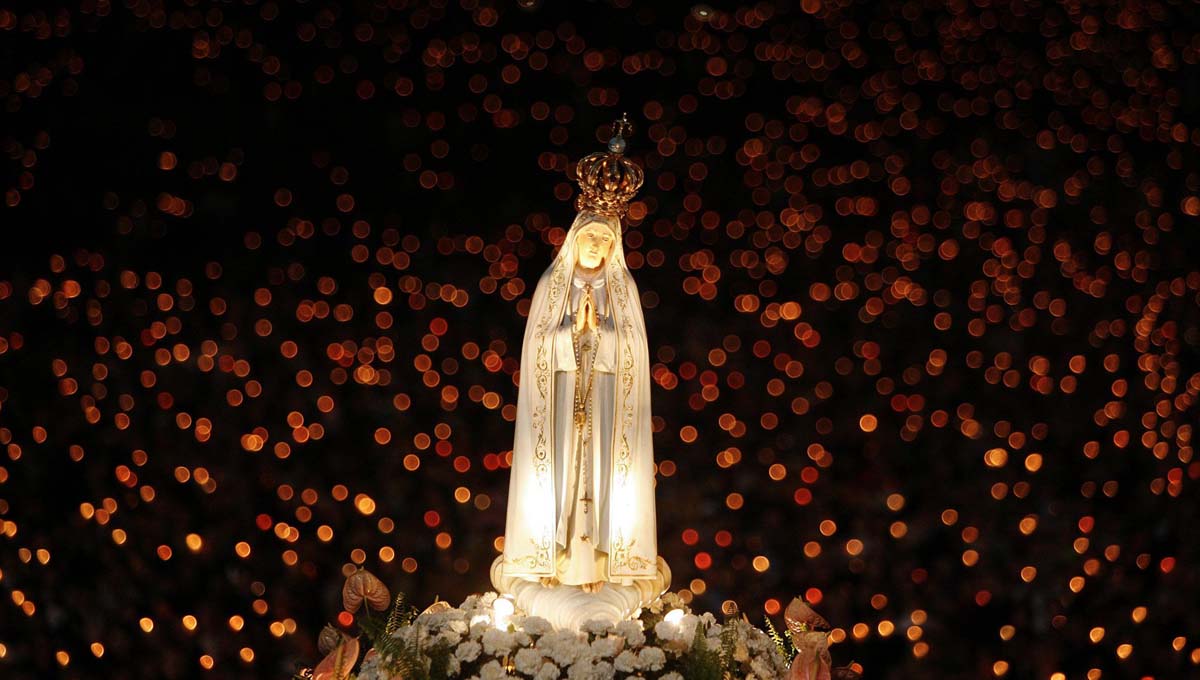 A statue of Our Lady of Fatima is carried during a candlelight vigil at the shrine in Fatima, Portugal in this file photo. The Vatican said Pope Francis will consecrate Russia and Ukraine to the Immaculate Heart of Mary on March 25. (CNS photo)

VATICAN CITY (CNS) — Pope Francis will consecrate Russia and Ukraine to the Immaculate Heart of Mary during a penitential prayer service in St. Peter’s Basilica March 25, the Vatican said.

On the same day, the Vatican said, Konrad Cardinal Krajewski, the papal almoner, will carry out a similar consecration at the Shrine of Our Lady of Fatima in Portugal.

In Texas, Catholic bishops are also joining Pope Francis in encouraging all people to join them Friday, March 25, the solemnity of the Annunciation of our Lord Jesus Christ, in making a solemn act of consecration of Russia and Ukraine to the Immaculate Heart of Mary, so that she, the Queen of Peace, may obtain peace for the world.

In a March 21 statement, the Texas bishops said they reaffirmed Pope Francis in his “unceasing” appeal to end the war on Ukraine.

Quoting Pope Francis, they said “It is a ‘senseless massacre where every day there is a repetition of slaughter and atrocities. There is no justification for this!’”

“Indeed, as our Holy Father has stated, the war is sacrilegious ‘because it goes against the sacredness of human life, especially against defenseless human life, which must be respected and protected, not eliminated,’” the statement continued. “We call on all people of good will to pray that world leaders will find an end to the conflict and to provide solace and support to the millions of people who are now refugees.”

According to the Vatican’s translation of the messages of Fatima, when Mary appeared to the three shepherd children in Fatima in 1917, she told them, “God wishes to establish in the world devotion to my Immaculate Heart. If what I say to you is done, many souls will be saved, and there will be peace.”

Warning of “war, famine, and persecutions of the Church and of the Holy Father,” Mary told the children, “to prevent this, I shall come to ask for the consecration of Russia to my Immaculate Heart.”

Some groups have continued to argue that Mary’s wish was never fulfilled or that it was never done properly because the pope consecrated the world and not “Russia.” The Vatican, however, has insisted St. John Paul II did so in 1984 when he led the world’s bishops in the consecration of Russia and the world. The late Sister Lucia dos Santos, the last surviving visionary and the one who received the instructions for the consecration, had said that it was properly performed.

At his Sunday recitations of the Angelus since Russia invaded Ukraine Feb. 24, people have been showing up in St. Peter’s Square with signs asking the pope for the consecration of Russia or of Russia and Ukraine to Mary.

The Fatima message promised: “If my requests are heeded, Russia will be converted, and there will be peace; if not, she will spread her errors throughout the world, causing wars and persecutions of the Church. The good will be martyred; the Holy Father will have much to suffer; various nations will be annihilated.”

But, the message continued: “In the end, my Immaculate Heart will triumph. The Holy Father will consecrate Russia to me, and she shall be converted, and a period of peace will be granted to the world.”