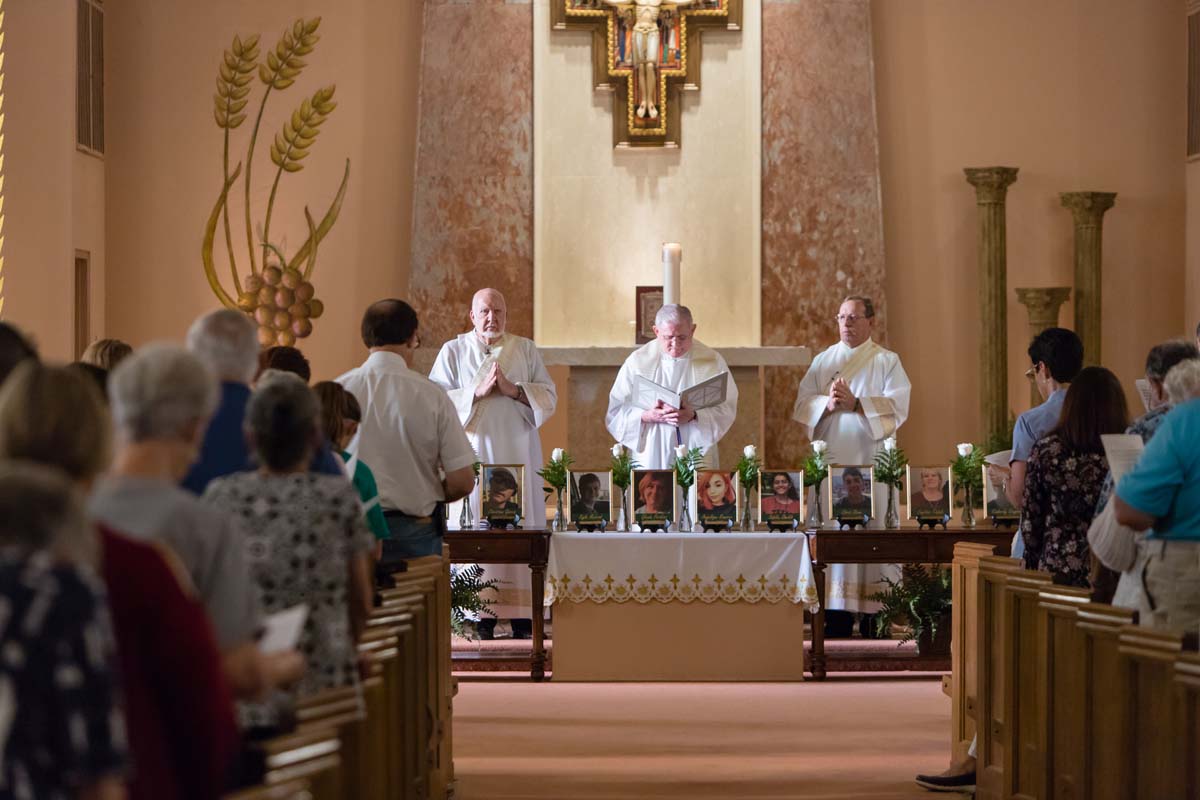 Father John Kappe, pastor of Our Lady of Lourdes Catholic Church in Hitchcock at center, presides over a memorial prayer vigil with Deacons Alvin Lovelady (right) and Joe Kelly (left) on May 30 for victims and those affected by the May 18 Santa Fe High School shooting. Photo by James Ramos/Herald.

HITCHCOCK — Deacon Alvin Lovelady, associate director of the Office of Correctional Ministries for the Archdiocese, prayed his heart out — the hardest he has ever prayed — for two hours the morning of the Santa Fe High School shootings on May 18.

That was the time period between finding out in a call at 7:50 a.m. from one of his daughters, who works at the school as a bookkeeper, that she didn’t know whether her mother — his wife, who also works at Santa Fe as a teacher’s aide — or her niece — his granddaughter, a graduating senior — had safely escaped.

Word finally came shortly before 10 a.m. that they had made it out uninjured.

Deacon Lovelady said, “I could only do as so many around the world did, and that was to watch as it unfolded. I could do one thing I had been trained as a deacon to do when people are in trouble and looking for help in a seemingly lost situation and that was pray.”

“By the grace of God, they survived,” he said.

Photos: Glimpses from the vigil in Hitchcock

“As the days unfolded after the event, along with many priests, deacons and other religious leaders in our community and beyond, we were able to enter the chaos of the victims and families of those involved and offer them help. I guess you could call us second responders, we’re still there when everyone else goes home. May God continue to bless everyone affected by this event as we move forward in this journey of healing and forgiveness one step at a time, even if they are baby steps,” Deacon Lovelady said.

Cardinal DiNardo said he was “deeply saddened” and that his prayer and the prayers of Catholics are with the “victims and families of those killed and injured in this horrific tragedy.”

In a separate national statement as president of the U.S. Conference of Catholic Bishops, Cardinal DiNardo said, “Our community and our local Church joins an ever-growing list of those impacted by the evil of gun violence. I extend my heartfelt prayers, along with my brother bishops, for all of those who have died, their families and friends, those who were injured, and for our local community.”

The 10 fatalities and 13 injured became the deadliest campus shooting in Texas since a sniper in a clock tower killed 16 people and injured 31 at the University of Texas at Austin in 1966.

A vigil to gather in prayer

The outpouring of love and support in the community has helped them — clergy going to the hospitals to offer comfort to those shot and their families, the prayer vigils lifting them up starting on the very night of the tragedy through a Memorial prayer service May 30 at Our Lady of Lourdes Catholic Church, just six miles from the school.

At least 300 parishioners, friends, family, visitors and survivors of the shooting gathered in the church to remember those who died, including eight high school students, aged 14 to 17, and two beloved Santa Fe school teachers.

One by one, as Father John Kappe, pastor of Our Lady of Lourdes, read the names of each of the victims, 10 teens — several wearing green “Santa Fe Strong” shirts — slowly walked down the aisle, each carrying high a candle in memory of one victim.

A framed photo of Jared Black, who had just turned 17 that Wednesday and was reported to be excited about his birthday pool party that Saturday, started off the row of framed photos and roses as Father Kappe read aloud their names, “These 10 people shared their lives with you... Jared Black, Shana Fisher, Christian Garcia, Kyle McLeod, Glenda Perkins, Angelique Ramirez, Sabika Sheikh, Chris Stone, Cynthia Tisdale and Kimberly Vaughn.”

They then placed their candle next to a victim’s portrait and a white rose, several of the teens visibly emotional. At the sound of each name, a bell tolled loudly, echoing throughout the church.

Deacon Lovelady, assigned to Our Lady of Lourdes, participated in the prayer service and his wife Linda attended along with other teachers and students from the area. Wearing her green “Santa Fe Strong” T-shirt, Lovelady huddled with a group of other Santa Fe ISD teachers as they shared their experiences of knowing the students and teachers who passed away and comforted each other.

‘No one in this church planned to be here’

“The truth is that up until almost two weeks ago, no one in this church this evening planned to be here. Our plans and our schedules at this time were vastly different. We were all going to be somewhere else,” he said.

“But we are here because life goes on, and we need to pray for our friends and our loved ones, especially those who were injured or have died,” the priest said. “We need to continue to support each other in our healing. We need to pray in thanksgiving for the blessing that our deceased loved ones have been in our lives. And we need to continue to be a light in the darkness of this world.”

The shooting shocked communities still in recovery from Hurricane Harvey, the parish itself having been recently renovated after seeing Harvey’s floodwater fill the sanctuary. Many of those affected, students, parents and community members, were flood victims themselves.

“We need to focus on the memories and the good times at Santa Fe High School that made you happy,” Father Kappe said, “and helped you to enjoy being in high school: the football game, the prom, the pep rally, the common bonds of friendship, and all of the other high school memories that have made you who you are.

“Those are things that nothing and no one can take away from you. We are especially here to calm our hearts and our spirit so that we can reclaim the peace that has temporarily been taken away from us.”

Those in attendance included shooting survivors and family members, members of the school staff and administration, as well as youth ministers and clergy from nearby parishes who helped minister to the community at the hospital or in parishes.

“You don’t need me to tell you that there will be a tremendous void in your school and in all of your lives because of the death of some of your peers and family members,” said Father Kappe. “Don’t ever forget the void that they filled in your lives while they were living.”

Father Kappe said, “When we break through these painful emotions, we will all be able to celebrate their new lives with God. Jesus knows more than anyone else the pain and suffering you are going through. He has gone to prepare a place for each of them.”

Bring hope to a dark place

When Lovelady and her fellow teachers returned to school the following week of the tragedy, they were greeted with gifts of sunflowers to each of the teachers from teachers of other Santa Fe schools. Then beyond their community, Friendswood ISD delivered hundreds of green “Santa Fe Strong” T-shirts for the school community.

To try to keep tradition going, Alvin ISD, which was already off for the summer, lent dozens of school buses to drive the Santa Fe graduating seniors back to their elementary and middle schools to relive their educational journey, thank their teachers and encourage the younger students.

Lovelady said, “It’s a wonderful tradition and it was so good to see all the smiles and how they were high-fiving the younger students. We have to remind them that it’s okay to be happy through the sadness.”

Outside the church, 10 green crosses surrounded a larger wooden cross, each bearing the name of a shooting victim. Inside, uniformed law enforcement stood watch in the narthex of the church and offered a visible presence.

According to May 30 reports from the Santa Fe Police Department, Officer John Barnes, with the Santa Fe Independent School District, is still hospitalized and remains in critical condition.

Wounded by a shotgun blast while confronting accused shooter 17-year-old Dimitrios Pagourtzis, hospital officials said Barnes flat-lined twice. He and a fellow officer are recognized for drawing Pagourtzis away from other students.

On May 23, Houston Mayor Sylvester Turner named retired Archbishop Joseph A. Fiorenza of Galveston-Houston to his commission against gun violence, with 36 others from a cross-section of the city community.

Following the 2016 Orlando Pulse nightclub shooting, Archbishop Fiorenza spoke at a vigil at Houston’s City Hall, calling for change and to protect and pray for all walks of life.

In closing his reflection, Father Kappe shared a call to love and forgive.

“As we have been in the past, we may forever be Santa Fe strong,” he said. “May we may be an example to the many people who are focused on this very small community of Santa Fe, and that they may learn from us that love and forgiveness will always be much stronger than evil.”