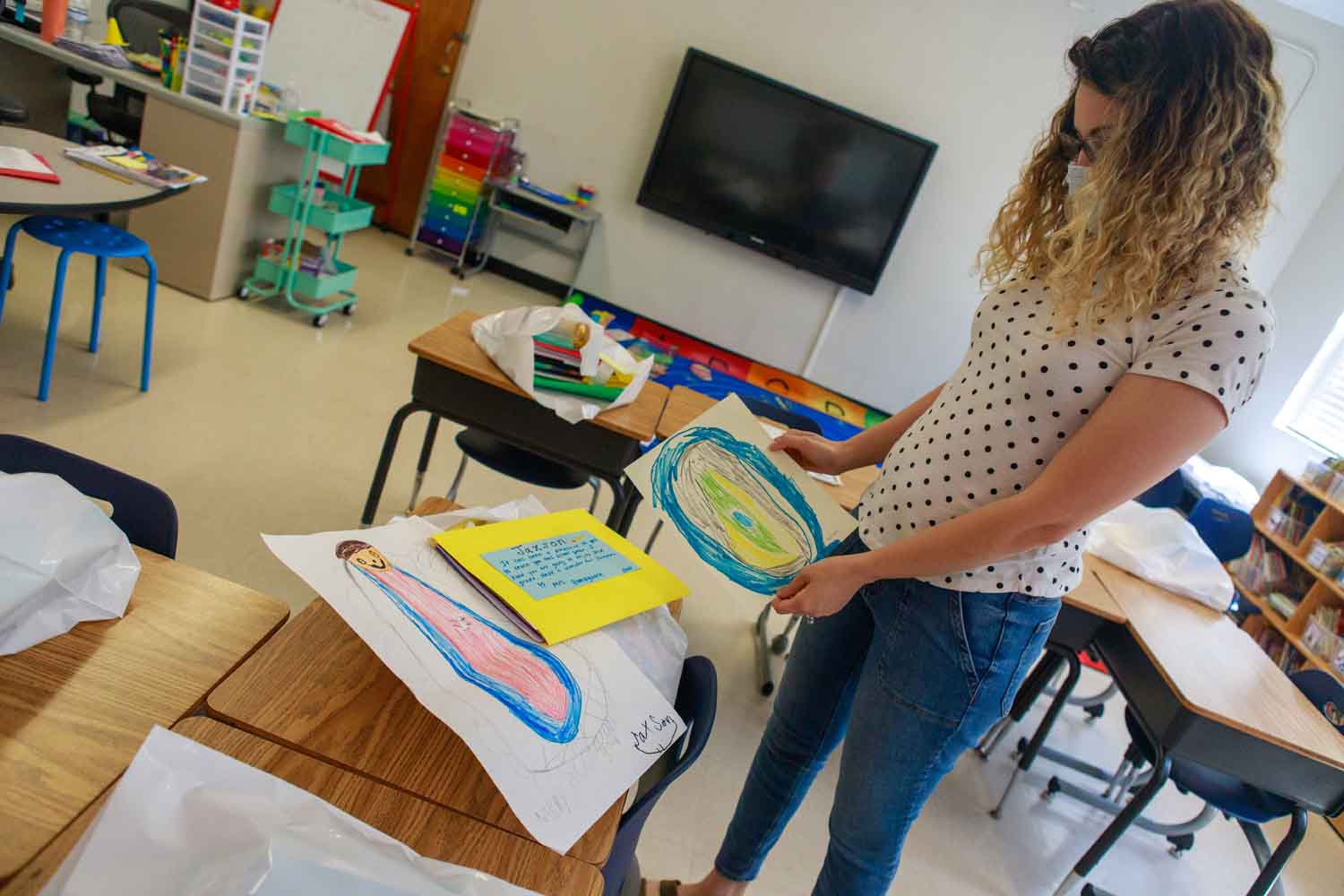 Natalie Romaguera, a first-grade teacher at Our Lady of Guadalupe Catholic School in Houston, preps her student’s packet that contains his belongings, including two drawings of the school’s namesake. Students were picking up their desk and locker belongings that next week with the end of the school semester, one of the few times students could return to campus after the COVID-19 pandemic ended on-campus classes in March. (Photos by James Ramos/Herald)

HOUSTON — It had taken her a few days, but on May 15, Natalie Romaguera had finally cleaned out her first-grade students’ desks of all their belongings.

At Our Lady of Guadalupe Catholic School in Houston’s East End, Romaguera had slipped handwritten notes into individual bags carrying entire desks’ contents. Homeward bound the next week to her beloved students, the packets were bulky and full of school supplies and graded classwork that didn’t make it home before the COVID-19 pandemic shut down the school on March 13.

The school’s 230 students, like tens of thousands of Catholic school students across the Archdiocese, then rapidly shifted to distance learning.

Wearing a mask, Romaguera sifted through a student’s packet, pulling out two drawings of the school’s namesake: Our Lady of Guadalupe. The Blessed Mother’s bright colors matched the hundreds of classroom supplies she was moving to storage. The pandemic dismissed her classroom for a virtual one, a jarring teaching year for Romaguera, a first-year teacher.

Students ‘never came back’
She navigated a myriad of challenges, as many other teachers had, with adjusting to distance learning. The school provided laptops to families needing help with computer access, and even then, some families had to share a single device between several students in the same household. Sometimes the internet goes fuzzy, the audio drops or a student’s frame freezes enough to stutter the lesson. Still, Romaguera tried to keep to the same Spring semester schedule she had taught her students in the 11 weeks she had in-person with them.

Romaguera said she realized the last photos she had with her students was on Go Texan Day, on Feb 27, the same day a major water main pipe broke and sent Houston into a frenzy that sent students home early. Outside in the hallway leading to her room, a calendar still celebrated 23 students’ March birthdays.

She had sent her students personal postcards, something they could keep on their refrigerator or next to their bed to remind them of her commitment and love for her students.

She found a student had quietly stowed away seven of her classroom’s library books in her desk, ready to take home the next week. Her students all had library books that were supposed to be exchanged that following Monday.

“But they never came back,” she said. “It’s for sure very emotional. It’s kind of sad to be here.”

Pulling down a massive green bulletin board background that was taller than her, Romaguera said that normally teachers say goodbye to their students before they clean up.

This year hasn’t been normal, and their goodbyes happened during a school-arranged drive-thru event at the school the week before. Behind her mask made of the school’s trademark maroon-colored plaid, she smiled and cheered as her students drove by the school.

‘The gym is empty. the school is empty.’

While Romaguera continued to disassemble her classroom, with an uneasy preparation that looked towards the murky future of the upcoming fall semester, the school’s Athletic Director and PE Coach Tony Tran set up a table and chair in the school’s gymnasium to prepare for the school’s annual, if not first-ever, athletics award ceremony held virtually that evening.

Usually, the affair filled the room with a celebration of new personal records, medals and awards.

But standing in a quiet and darkened gym, Tran said that, as the coach for the school’s four sports — volleyball, soccer, basketball and track — and also PE teacher, he was fortunate to get to know each of the school’s Pre-K to eighth-grade students more so than most other teachers.

His athletes were preparing for their second track meet, scheduled for the week after Spring Break, their biggest event where they’d take on nearly every other Catholic school in the area. They were excited to race, with students taking to the track for the first time.

His students and their parents kept asking for practice, a reach for a sense of normalcy during the pandemic that upended the world. Eager to offer a glimpse of that, Tran struggled to set practice dates as school continued to be postponed, with all on-campus events canceled, including practice. His practice on March 18 had been the final scheduled event on campus.

“They were thrilled and just overjoyed with the [new] season,” he said. And like the Tokyo 2020 Olympics, the NBA, NHL — pick any sport — the Eagles’ chance for any new personal records didn’t even reach the starting line.

Still, Tran continued to coach his students remotely. He became a remote personal trainer, filming PE videos for his students to keep them active and moving at home.

“It’s made me a better teacher,” he said. “I would never have thought of recording videos for the kids, that would be a staple of mine for the rest of my teaching career. And it’s just really tough. I keep waking up every day thinking I must be dreaming. It doesn’t seem real, just to be here. The gym is empty. The school is empty.”

In his office, between a volleyball net leaning against the wall that towered above him and stacks of soft gym mats, Tran readied for the evening that would serve as a “culmination of the whole year” for his students.

A sense of determination drove his eager effort to recognize each student’s achievements on the court and on the field.

He said personally delivering the trophies: “Just handing it to them will be special. Special, not only for them but for me. That’s the least I can do for the kids during this time.”

Focused on the future

On the campus and the adjoining Our Lady of Guadalupe Catholic Church, which reopened for public Mass on May 17 to limited capacity, signs around campus depicted parish life oddly on pause. Flyers for a Good Friday fish fry and other Lenten activities still hung on bulletin boards.

In the school office, School Counselor Catie Watso was tagging items for an upcoming online auction school fundraiser. Like in other classrooms that still had March 12 homework assignments on the boards, the handwritten calendar in her shared office also said March, an emblem of time frozen but not easily forgotten.

She recalled the flurry of decisions to close the school ahead of Spring Break, followed by extension after extension as Watso and her colleagues rallied to continue serving their students.

Though she wasn’t licensed to offer telecounseling to her students and their families with distance learning, she pointed them to a wide array of resources available to them during the pandemic.

School Principal Irazema Ortiz said they were still working on defining what the fall semester would look like. But with a sharp eye on the future, she said the school remained focused on serving their students and families in the summer.

Ortiz said she was proud of how her teachers and faculty “persevered” to serve their students and each other in every way. Though distant, the pandemic “brought them together in every way,” she said.

When students came to pick up their belongings the next week, the “bittersweet” experience “with tears” helped her realized how much she missed seeing her students in person. Seeing them was a relief to know that they were okay during the pandemic.

“There was no closure, but they’re okay. And we’ll see them again soon,” she said.

For more information about Our Lady of Guadalupe Catholic School, which is part of The Cardinal's Circle for Inner City Catholic Schools, visit olgschoolhouston.org.