By Lisa May, Special to the Herald 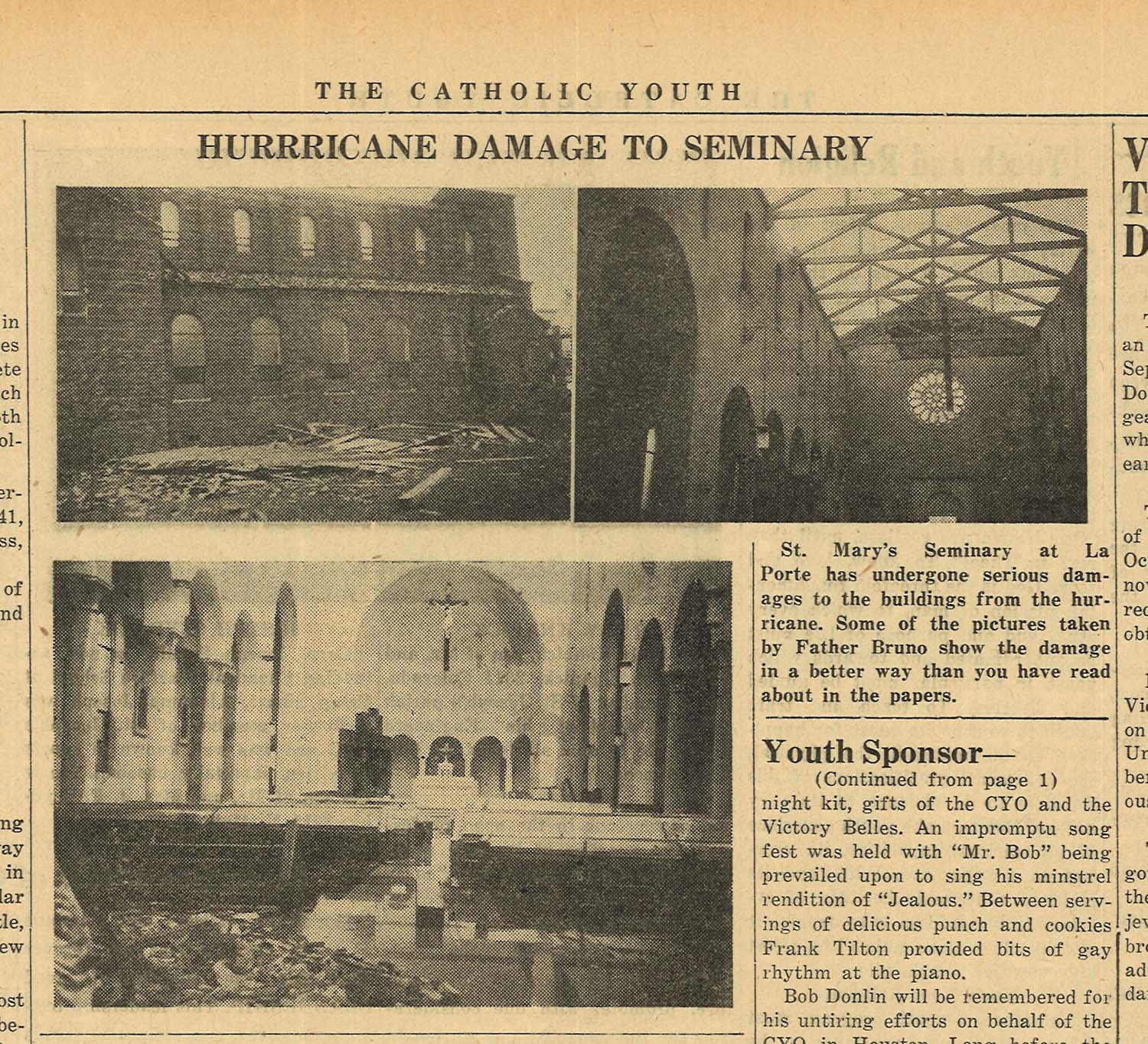 The Catholic Youth, the Catholic Youth Organization’s diocesan newspaper, published photos of the serious damages to St. Mary’s Seminary in LaPorte following the 1943 hurricane that struck the diocese. Storm warnings before the storm, news and information about the devastation was quashed due to national censorship efforts because of World War II. (Photo courtesy of Archdiocesan Archives)

GALVESTON — Hurricanes and tropical storms have impacted the lives of individual Catholics, the parishes and ministries of the Archdiocese throughout its history.

The first church on Galveston Island, a small frame building named in honor of the Virgin Mary, had been open only a few months when a hurricane in September 1842 blew it off its foundations. The great Galveston Storm of 1900, still considered one of the worst natural disasters in American history, brought thousands of fatalities and destroyed seven churches in the Galveston diocese alone.

The names Carla, Alicia, Allison and Ike still resonate with residents of the Gulf Coast, as this year marks the fifth anniversary of Hurricane Harvey’s destruction.

Though warnings about the 1900 Storm came too late for many, through the 20th century, people came to depend on alerts from the National Weather Service about developing storms. In 1943, however, censorship imposed during World War II left the Galveston-Houston area unprepared for a hurricane that made landfall in Galveston on July 27 as a Category 2 storm.

In a time before satellites or even airplane reconnaissance, the Weather Service relied on reports from shipping. Crucially, under fear of German U-boat activity in the Gulf of Mexico, ships were ordered to radio silence.

The first notices of the storm came on Monday, July 26, the day before it would make landfall. At that time, the predictions were for a “small tropical disturbance.”

Only as the storm made landfall on Bolivar Peninsula around noon the next day did it become clear how strong the storm would be and how unprepared the population was. Radio stations, then the only media that could have sounded warnings, went silent with power outages.
As the center of the hurricane moved north, people were caught in the wind and rising water. Plants in Texas City, Baytown and Deer Park that were producing war materials did not have enough warning to shut down safely.

At Ellington Field, air cadets were sent out into the storm to hold down planes caught on the ground. In Houston, people working downtown had to shelter in place at their jobs.

By Wednesday morning, the storm had reached Navasota, moving to the northwest. Residents could begin to assess the damage and clean up in the aftermath. Kirwin High School in Galveston (later O’Connell High School) welcomed 100 people taking refuge during the storm. Many of its windows were broken, letting in rain that flooded the chapel and damaged other buildings.

In La Porte, the chapel at St. Mary’s Seminary also suffered major damage when the roof blew off. The gymnasium was in such bad shape that it would later be razed.

Bishop Christopher Byrne reported in August, “We carried sufficient insurance on the Seminary Chapel to meet all the damage that was done there. We were not so wise with the other buildings.”

Among the parishes, St. Mary of the Miraculous Medal Church in Texas City suffered the worst, with the church destroyed in the storm. The parishioners would rebuild, only to lose their church again four years later in the Texas City Disaster of 1947.

Bill Read, formerly of the Houston/Galveston National Weather Service office, wrote in an article about the 1943 “Surprise” Hurricane that “The news of this hurricane was heavily censored by the government due to national security. The loss of production of war materials couldn’t be found out by the Axis Powers.”

News stories about the storm were published only in Texas and Louisiana, the two states impacted by it. Catholic publications, including the Southern Messenger out of San Antonio and the Catholic Youth, the Galveston diocese’s Catholic youth organization paper, carried stories on the storm. Bill Read notes, however, that “After this hurricane, never again were advisories censored from the public ... the risk to human life is too great.”