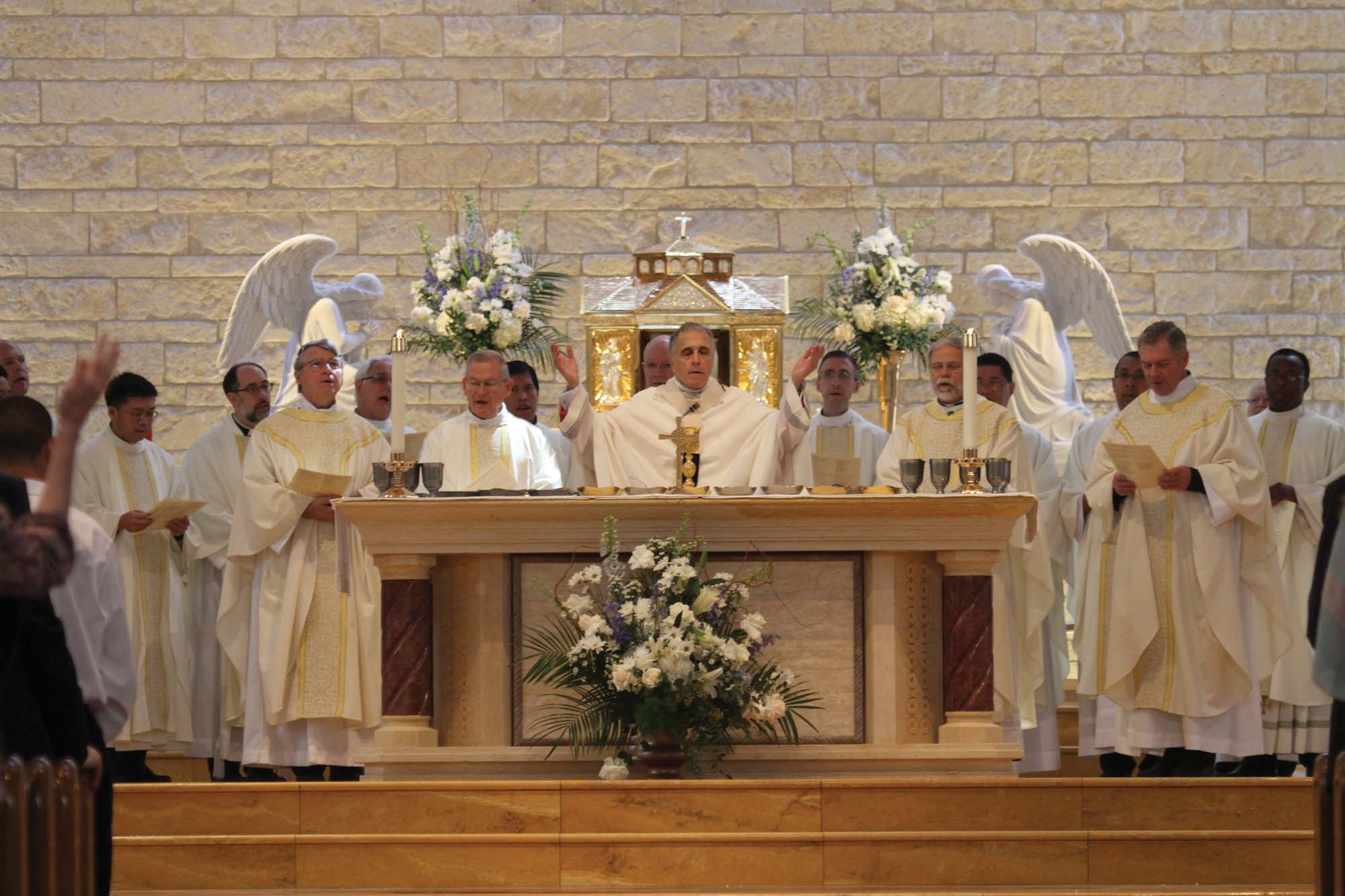 HOUSTON — The traditional and the modern met recently on the altar of St. John Vianney Catholic Church, one of the largest churches in the Archdiocese, as Daniel Cardinal DiNardo, pastor Father Troy Gately and the successor of St. John Vianney, Father Patrice Chocholski invited from France, blessed the new church construction.

With 5,000 registered families wrapping up celebrations of the church’s 50th anniversary last year, the blessing of the altar this past March came as construction workers hurried to put final touches in the church’s narthex and other areas before the busy Holy Week and Easter.

Father Gately said, “This remodeling reminds me of an episode in the life of St. John Vianney. Shortly after he arrived in Ars, he surveyed the parish and the church... The building and the altar were exceedingly plain and in disrepair. His biographer, Abbe Trochu writes ‘Out of reverence for the Holy Eucharist, he wished to secure as beautiful an altar as possible.” He had a new altar built and had angels placed on each side of the tabernacle.’”

Now two beautiful white marble angels also grace each side of the tabernacle at St. John Vianney in Houston.

“The new chairs in the sanctuary were made with wood from St. Mary’s Cathedral Basilica in Galveston, my home parish. When Galveston was devastated by Hurricane Ike, eight weeks after I arrived here as pastor in 2008, the Cathedral was severely damaged. The original pine floors from when the Church was built in 1847 had to be removed. By God’s providence, some of the timbers were saved and we have fashioned these chairs from them.

“While construction continues and we see more pieces fall into place, such as the bell tower, organ and narthex shrine, we realize that the greatest gift we have is our new life in Jesus Christ, the grace he bestows on us and the blessing to share his love with others!,” Father Troy said.

Father Chocholski celebrated several Masses with the parishioners during his visit to Houston and at his farewell Mass, he reminded those attending how St. John Vianney had the mercy of God streaming from him and was known as a very compassionate confessor.

“The Sacrament of Reconciliation, important during this coming Holy Season of Easter, is always one of the best ways to get in touch with Jesus, to know the greatness of His Heart. What a healing ministry!” Father Chocholski said.

St. John Vianney, gifted with the ability to read people’s hearts, would spend up to 16 to 18 hours in the confessional daily as thousands of pilgrims poured into the small French village of Ars to talk with him, Father Chocholski said.

The saint was quoted about his compassion of penance saying, “For me, I will tell you my recipe. I give the sinners a small penance and the rest I do in their place.”

St. John Vianney also built orphanages for the children left on the street, “one night of passion and then they were forgotten,” Father Chocholski said of the little boys and girls whom the saint built homes for.

When he was asked to become Cure of Ars, basically the successor of St. John Vianney, Father Patrice said he was afraid because how does one follow a saint.

“None of us seem worthy, but then I knew St. John Vianney would pray for me. All of us as priests have St. John Vianney as our patron saint. Everyone can pray to him to intercede for them,” Father Chocholski said.

The saint as a boy had to grow up during the anticlerical terror of the French Revolution and had to attend Mass in secret. But again, even in terrorism, whether in the past or modern age, St. John Vianney would respond with mercy.

Father Chocholski explained, “Praises and insults were the same to him. He prayed for all his brothers and sisters, especially those against him.”