Stormy start to a march down the aisle 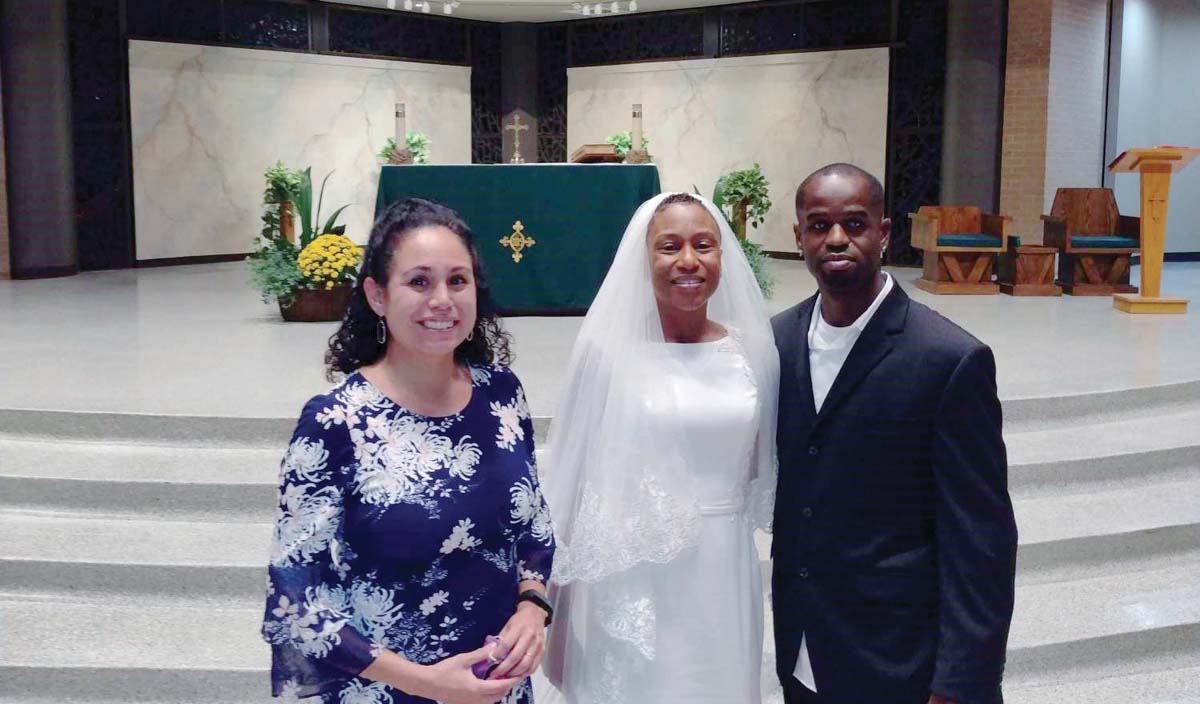 HOUSTON — Bride Janella Jett and her groom Byron Perrilliat planned to marry Sept. 3 in a New Orleans church where they grew up, but Hurricane Ida had different plans when it barreled into NOLA on Aug. 29.

The couple, along with their families including six children, headed to Houston with her wedding gown intact.

“Byron and I have been friends throughout the years since going to school and church together. But it’s just been the past few years that we realized we were on the same spiritual level,” Jett said.

Both in their 40s, they decided to get married by the church in their neighborhood until “a big hurricane started coming that way,” she said.

So when they evacuated to Houston along with a line of traffic, they called the Archdiocese of Galveston-Houston to ask if they could still get married on Sept. 3.
Victoria Fontana Smith, administrative assistant for the Secretariat for Clergy Formation and Chaplaincy Services, connected several priests to the case to make sure the marriage documents were in order and even called the bishop of New Orleans to confirm.

Father Tom Rafferty, new Episcopal Vicar for Clergy and director of the Secretariat, and Sister Gina Iadanza, associate director for the office, checked with priests who could officiate over the wedding on such short notice. Smith also checked with St. Thomas More Catholic Church, and ultimately Father Thuc Nguyen was tapped for the wedding Mass.

“Obviously, this was a special circumstance because of the hurricane. It was really a diocesan effort,” Smith said.

Jett’s family attended, but his mother couldn’t make it, so she witnessed it livestreaming on Facebook.

Even then, it was a close call in hot, humid Houston. The couple was caught unaware in a flash flood on their wedding day.

“After all that, we were almost stuck in a flood on the outskirts of Houston. I prayed to God and said, ‘please don’t be joking with us,’” Jett said. “But we made it to the church on time!”

They celebrated with a brief honeymoon in Houston and then Atlanta before returning to New Orleans by Sept. 7 to review the damage to their homes.
“We have foundation and roof damage. There’s still no power and long lines for everything from resources to ice and even running out of gas. But I can’t complain,” she said.

Byron is a contractor by trade, so he will be working on the repairs.

“The church was so beautiful, and Father Thuc was so nice. We couldn’t have asked for better. It was a perfect church wedding,” she said.