Steps for Students: a runaway success 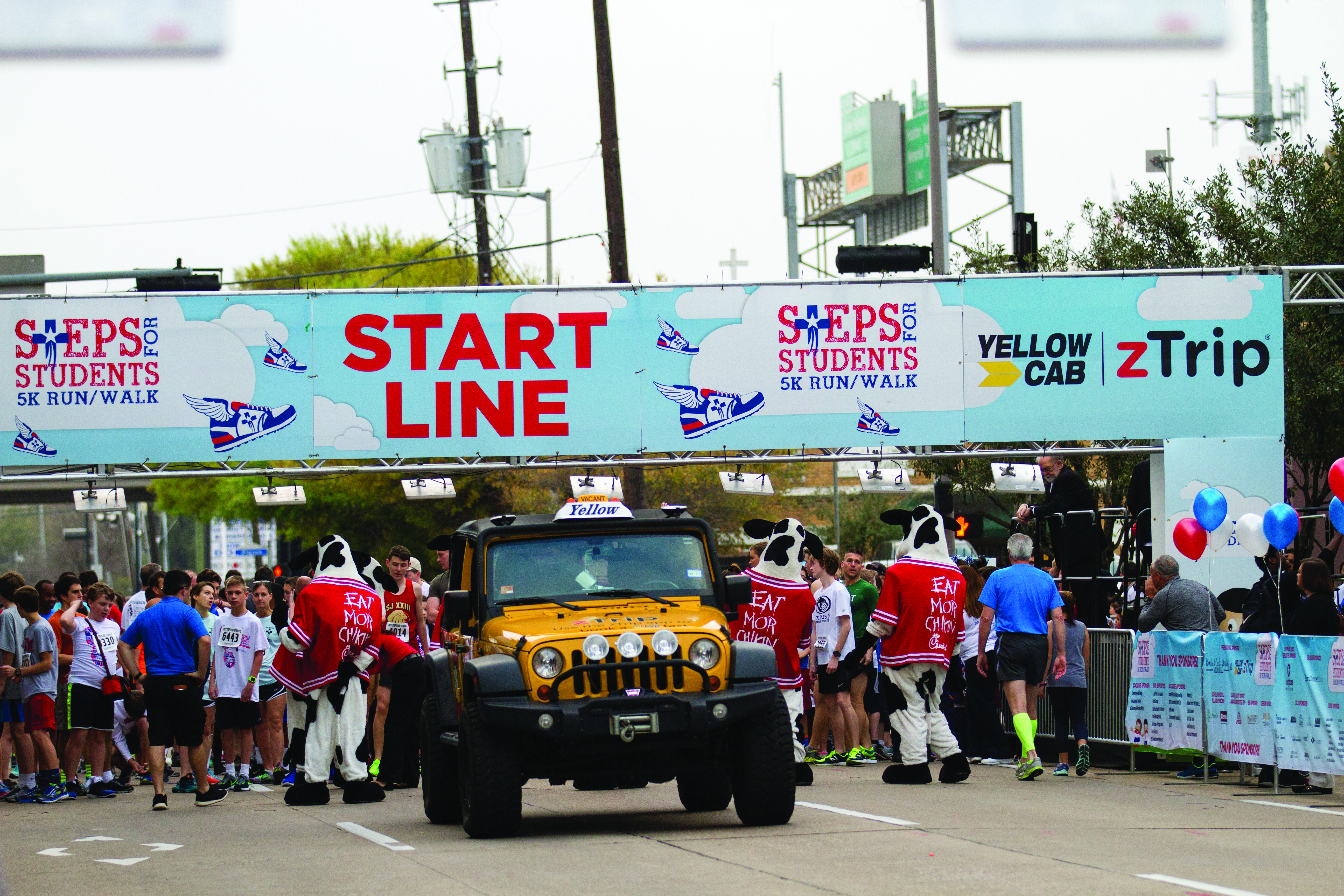 HOUSTON — Among the massive crowd of nearly 12,500 who heard the bells of the Co-Cathedral of the Sacred Heart start to ring, Juan Ruiz, SJ, readied for the pistol to start the 2017 Steps for Students 5K Run and Walk.

When the starting shot echoed off the massive walls of the Co-Cathedral, Ruiz chased after the Yellow Cab/Z-Trip Jeep pace car through Houston’s downtown, East downtown and Midtown’s neighborhoods.

Ruiz said he ran in the Feb. 18 race to see the number of Catholic school students in the Archdiocese and to run with and for those Catholic schools communities.

Ruiz, 28, serves at Cristo Rey Jesuit Preparatory School in Houston, one of the 59 schools that benefit from the annual event. Joining other faculty, staff and students from Cristo Rey, he said he enjoyed seeing the crowds come together as a community.

Like Ruiz, supporters came from schools and parishes spread across the 10 counties of the Archdiocese, including Galveston County where Erin Barefield sends her daughter to Holy Family Catholic School.

Leaving behind all the Mardi Gras festivities on the island, Barefield said her daughter woke up that morning excited to run the race with grandma in hand. While it was the young girl’s first year at the school, it was their second race.

“There’s so much in the Catholic School Village,” Barefield said. “It’s exciting.”

Dozens of Catholic schools set up a tailgating party in the Catholic School Village before and after the race. That same excitement helped Sara Johnson’s 8-year-old son Ben to run the race with his father. Safely on the sidelines, Johnson waited for the two to run past her to the finish line.

“Every single person (here) has a smile on their face,” she said. “That’s what really motivates everyone to promote Catholic education, but also then to come out really early on a Saturday morning and walk. It’s something you gift to your child. It’s something all parents gift to their children.”

The participation of these supporters helps raise awareness of the value of Catholic education, assists schools with raising funds, and supports the Archdiocesan Tuition Assistance Program which makes Catholic schools accessible, available and affordable to all families.

The 5K was presented by Román and Cecilia Martínez Memorial, Yellow Cab and ZTrip. “Steps for Students is a day of fun and community-building. It is a time for us to come together in support of our mission to educate our students in mind, heart and spirit,” said Dr. Julie Vogel, superintendent of Catholic Schools for the Archdiocese.

“The run also helps the financial well-being of our Catholic schools in providing quality Catholic education for our students. In its 11-year history, the event has benefited thousands of students.”

For the past seven years, husband-and-wife team Román Martínez and Diana Dávila Martínez have co-chaired the event.

“Steps for Students has become an important part of my life,” said Román Martínez. “It allows Diana and me to thank God for the wonderful blessings in our lives — blessings that would never have been possible if I had not had the opportunity to receive a Catholic education.”

He added that the most important role of Steps for Students is that it helps fund the Archdiocesan Tuition Assistance Program.

“The event makes it financially possible for a greater number of children to attend a Catholic school and reap the benefits of a faith-based education. I believe that all students who want to go to a Catholic school should have that opportunity.”

Daniel Cardinal DiNardo, with Auxiliary Bishop George A. Sheltz, joined ABC13-KTRK’s Meteorologist Tim Heller, who emceed the event, to kick off the race.

Following comments from the two chairs, Cardinal DiNardo shared a blessing before the race began.

A student choir, under the direction of Denise Rios, sang the National Anthem. Also during the morning, the David K. Guite Spirit Award was given to Our Lady of Fatima School in Galena Park. The honor goes to the Catholic school team that best demonstrated the spirit of participation, creativity and enthusiasm through their team efforts.

The award is named for David Guite, late principal of Our Lady of Fatima Catholic School in Galena Park and founding member of Steps for Students. “Every year, we marvel at the growth of this beautiful community event,” Diana Dávila Martínez said. “And hearing about the race’s impact through tuition assistance and the individual projects it funds at each of our 59 Catholic schools is tremendously gratifying.”

By the end of the race day, more than 12,000 had registered for the race, collecting more than $1 million in support of Catholic schools. The race day began early Saturday morning with a sunrise Mass celebrated by Father T.J. Dolce, Archdiocesan director of vocations, at 6:30 a.m., which Ruiz attended with hundreds of others.

“I love Father T.J.’s energy,” he said. “I loved the homily and what he brought with it. It was really encouraging.” Ruiz said he loved seeing so many people show up that early for Mass, especially on a race day.

“It’s an awesome way to start off any day, especially the day when we’re coming together as a community, as one big Christian celebration.” Ruiz, who is a regent in Jesuit Formation, said he also appreciated the witness of so many young consecrated men and women religious and priests at the race. A commitment to religious life is a “great witness, and a testimony to God’s existence.”

For more information and to donate, visit steps4students.org.