St. Philip the Apostle returns to home church sanctuary a year after Harvey 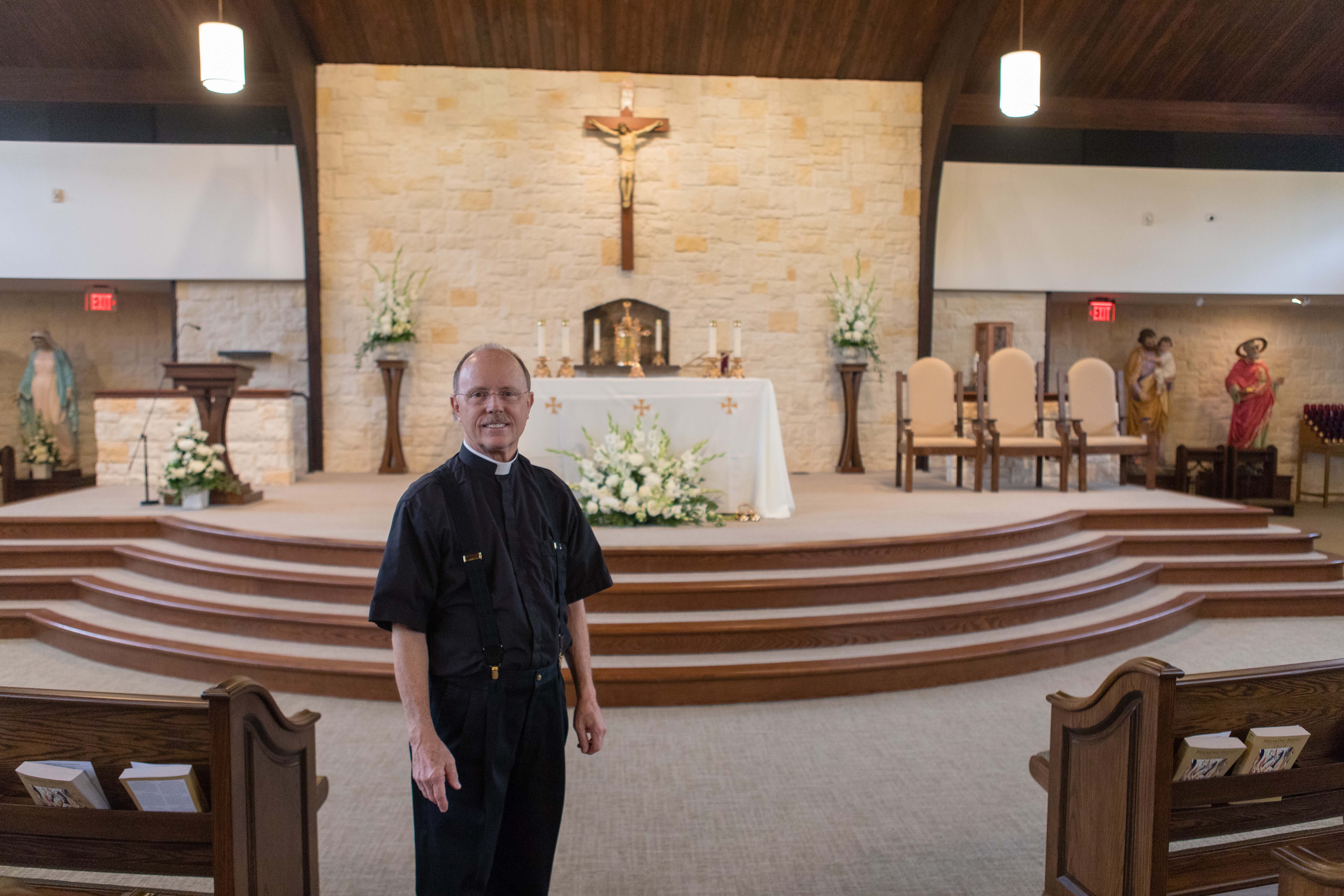 Father Richard Barker, pastor of St. Philip the Apostle Catholic Church in Huffman, is seen in the newly renovated church sanctuary. Devastated by Hurricane Harvey, the parish returned to their original church Aug. 12 for a Mass
of Homecoming and Return. Photo by James Ramos/Herald.

HOUSTON — The 51 inches of rain had happened almost 52 weeks ago. Even so, Father Richard Barker vested himself just as he would for any other Mass. But this time, nearly a year after Hurricane Harvey decimated the Texas Gulf Coast, he and the parishioners of St. Philip the Apostle Catholic Church in Huffman could gather as a church community in their own church building.

With Auxiliary Bishop George A. Sheltz presiding over the Mass of Homecoming and Return at the northeast Houston church, the pastor of St. Philip the Apostle was finally able to see his fellow parishioners in familiar church pews — though now replaced — once again.

The Aug. 12 Mass included a special Blessing of the Church where Bishop Sheltz sprinkled holy water through the church, blessing the renovated building and the parishioners themselves.

Like other parishes devastated by Harvey’s catastrophic flooding caused by record rainfall — even 61 inches in other parts of Southeast Texas just down the interstate from St. Philip — the community had celebrated Mass in a nearby event center.

That morning, parishioners shared long embraces and audible gasps as they walked into their renovated sanctuary, many for the first time since they had seen it either flooded or gutted during renovation. Tears were seen during parts of the Mass, including the blessing.

“As it is sprinkled upon us and throughout this church, make it a sign of the saving waters of Baptism, by which we become one in Christ, the temple of your Spirit,” said Bishop Sheltz in the blessing of the holy water.

It wasn’t until the days after the torrential rainfall from Harvey that made landfall Aug. 25 near Corpus Christi, when the water released from the Lake Conroe dam some 45 miles away flooding the San Jacinto River into Lake Houston and the creeks surrounding St. Philip.

That unprecedented release has now seen a deluge of lawsuits since then. In the end, Harvey and its aftermath, its biblical flooding and the complications it caused, claimed the lives of more than 75 people.

The flooding pushed the community of nearly 600 households out from their church grounds. They held parish life events and Masses in nearby venues — not one Sunday Mass was missed, Father Barker said.

At one point during the Mass, Father Barker seemed to beam as he looked out to his parishioners. He wasn’t thinking about the chest-deep floodwater that rushed into the sanctuary last year and that he waded through to get into the flooded sanctuary to save parish property, or the terrifying floating fire ant colonies he encountered while clinging on to trees to make his way to the church, or 65 crepe myrtle trees he and his physical plant manager trimmed the week before the storm.

He said he saw a smiling parishioner looking back at him.

“To see someone in the congregation smiling at me, looking at me and smiling, I can’t help but smile back because I can’t offer Mass without being connected to the people,” Father Barker said. “If I lose that connection, I can’t speak a word up there. I get so flustered, I stop, and I’m so disconnected. But if I’m connected to the people, and I have that utter, total, complete, total sense that we’re one, we’re together — then I can smile — and then I won’t stumble over the words. Then I can give a homily.”

Father’s efforts, joined by the parish and wider community, helped to save the parish property. Today much of the 41-year-old church still features works now restored to their original beauty, preserved by parish and community efforts. The colorful stained-glass windows shine during Mass, while hand-carved saint statues, the parish’s historic baptismal font, tabernacle and 135-year-old crucifix draw parishioners into deeper worship.

Parishioners Carlie and Brett Richard know well the backbreaking and arduous efforts it took to get to this moment. On Labor Day weekend, Brett Richard, with a few other parishioners on canoe and boat, was among the first to wade onto church grounds and recover and protect more property.

With parish staffer Lupe Cupples, the Richards helped bolster the renovation process. While many parishioners desired to keep and repair some treasured parish belongings, biohazard risks prevented that — countless chemicals and other health contamination hazards in the floodwater presented dangers.

After the Mass, Cupples agreed with the Richards and said that the Mass was emotional. Her daughters attended nearby Kingwood High School, which also saw six feet of water. While their home was spared, her daughters quickly realized that both their school and their church were gone.

“There are so many blessings that we had in disguise, and now we’re seeing them,” she said.

Catechism classes still continued after the storm. A neighboring Christian church which hadn’t experienced as much flooding, opened their campus to host youth catechism classes, as well as choir practice.

He said he was inspired by the efforts of the other churches in the community that worked to help.

“Once they reached a point where they couldn’t do anything more, they were coming over here to help us, too,” he said.
Cupples saw “people of all sorts of faith or no faith at all. Just come and do and donate and give, a lot of giving, of time, of talent, of treasure from all outside the community,” come and help.

“God is multiplying graces and blessings in the midst of his people,” said Father Barker after the Mass. “St. Philip’s worship area is filled with light, the light of the sun and the light of our joy.”

In his homily, Bishop Sheltz congratulated the parishioners on their restored church home and encouraged them to be like Elijah, the prophet who brought others closer to God.

Bishop Sheltz also called the congregation to prayer: “May all here today and all those in days to come, who celebrate your mysteries in this church, be united at last in the holy city of your peace.”

Father Barker finds that peace in his parish community.

“The Lord led Moses through the Red Sea and we came across the Brown River,” said Father Barker. “He stopped Moses at the river, wouldn’t let him cross the Jordan. The Lord has let me cross back here with these people. I’m very mindful of Moses in all of this. This is the Promised Land for us. We’ve reached it.”