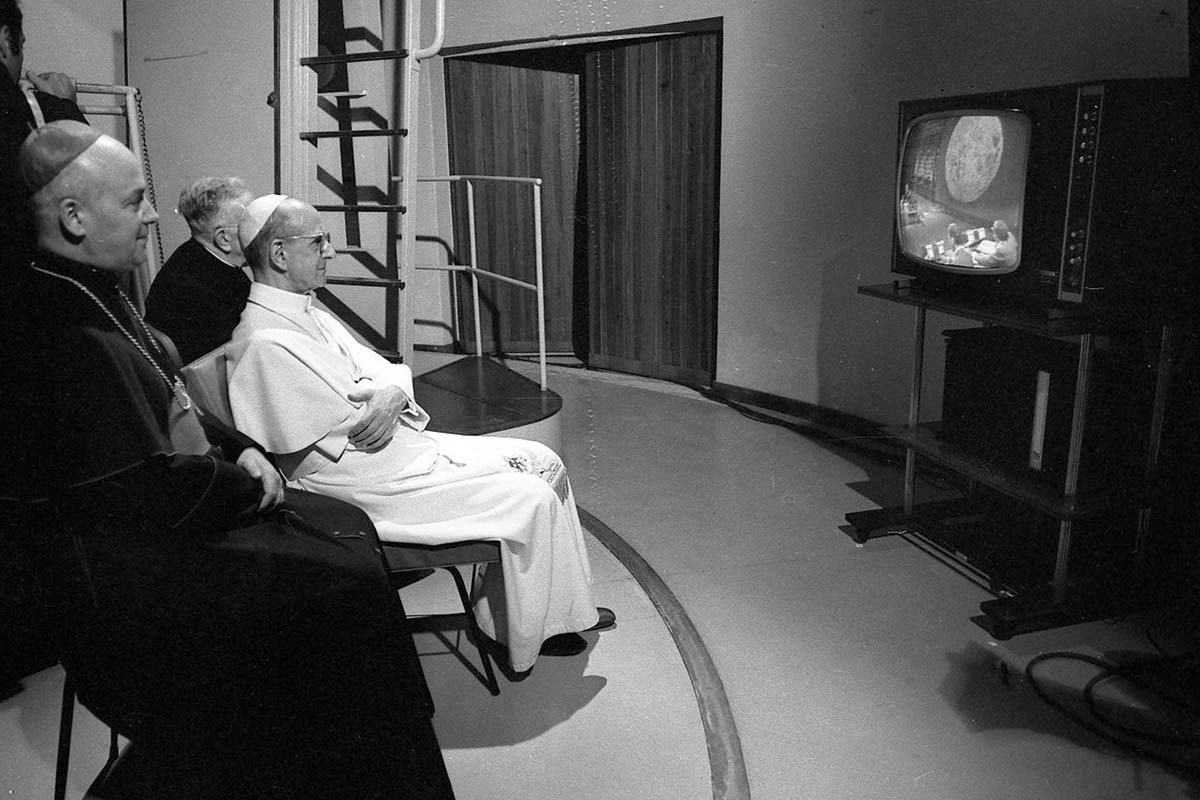 Just minutes after Apollo lunar module shiny foil feet touched down on the surface of the moon, St. Paul VI sent the following message from his Observatory at Castel Gandolfo, near Rome where he was watching the landing and viewing the moon from the Vatican’s telescopes, to the astronauts:

“Glory be to God in the high heavens and peace on earth to the men of goodwill! We, humble representatives of that Christ, who, arriving among us from the chasms of the divinity, made this blissful voice echo in the heavens, today we echo back to you, by repeating it as a hymn of celebration from our entire terrestrial sphere, no longer an impassable limit of human existence, but a door open to the depth of unconfined spaces and new destinies.

Glory be to God!

And honor to you, men creators of the great special endeavor! Honor to the responsible men, the scholars, the creators, the organizers, the operators! Honor to all who made the very audacious flight possible! Honor to all of you, who made an effort in some way! Honor to you, who, sitting behind your prodigious aircrafts, govern, to you, who notify to the world the work and the hour, which extends to the celestial bodies man’s sage and audacious dominion.

Honor, greetings and blessings to you, conquerors of the moon, pale light of our nights and of our dreams! Bring to it, with your living presence, the voice of the spirit, the hymn to God, our Creator and our Father.

We are close to you, with our good wishes and with our prayers. Together with the whole Catholic Church, Pope Paul VI salutes you.”

Along with other heads of state, St. Paul VI sent a message to the Moon aboard the Apollo 11 mission. On behalf of the Catholic Church, St. Paul VI sent Psalm 8. He dedicated Psalm 8 to the Apollo 11 mission. The Holy Father blessed Apollo Moon landing, upholding the Vatican's tradition of supporting science, astronomy and the application of human reason.

“O LORD, our Lord, how awesome is your name through all the earth! I will sing of your majesty above the heavens with the mouths of babes and infants. You have established a bulwark against your foes, to silence enemy and avenger.

When I see your heavens, the work of your fingers, the moon and stars that you set in place — What is man that you are mindful of him, and a son of man that you care for him?

Yet you have made him little less than a god, crowned him with glory and honor. You have given him rule over the works of your hands, put all things at his feet: All sheep and oxen, even the beasts of the field, the birds of the air, the fish of the sea, and whatever swims the paths of the seas. O LORD, our Lord, how awesome is your name through all the earth!”