St. Mary Star of the Sea takes back to Galveston skies 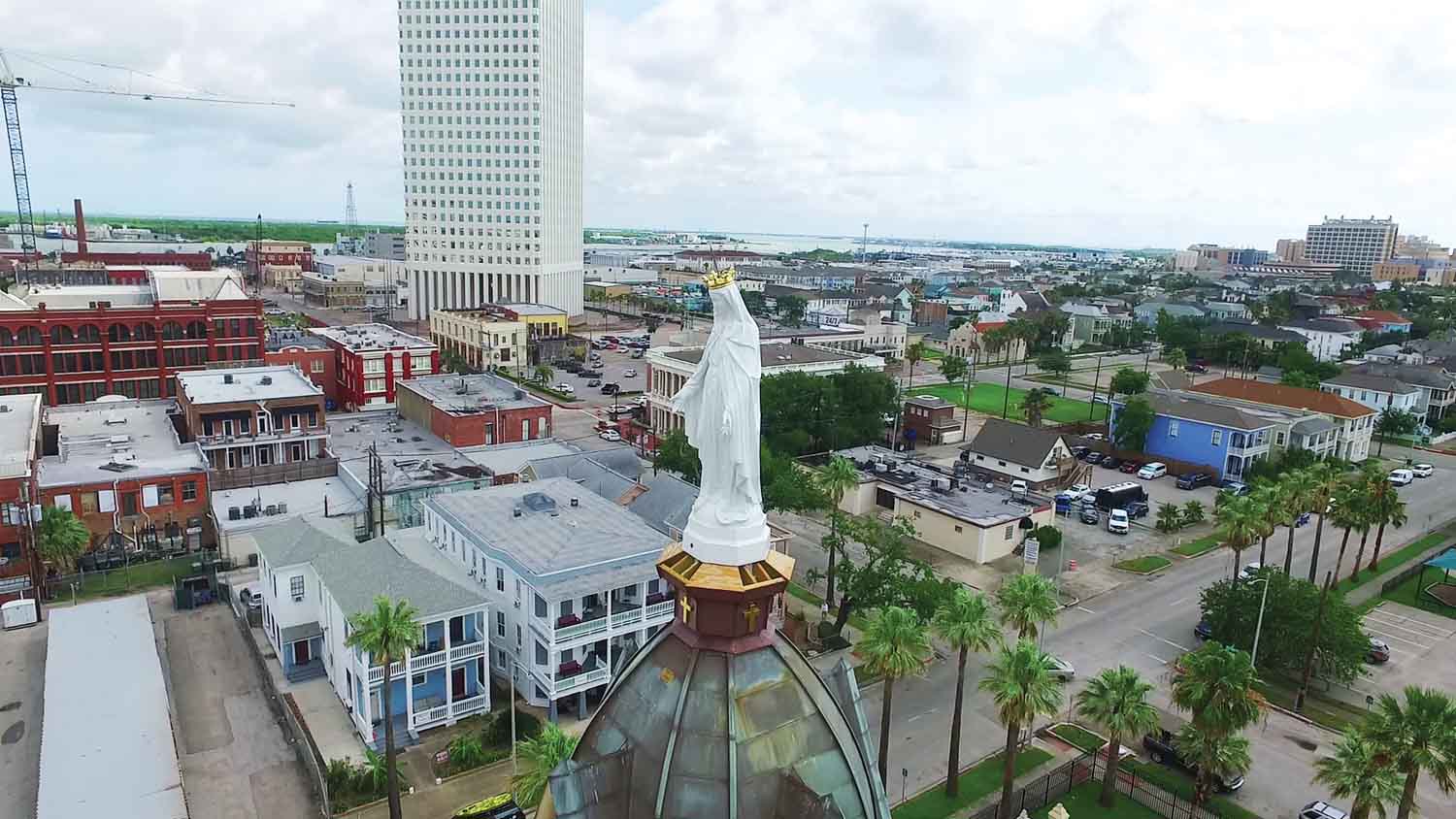 The historic 1878 St. Mary Star of the Sea statue is seen on top of St. Mary Cathedral Basilica’s belltower in Galveston on May 28. The statue was lifted back on top after undergoing an eight-month $50,000 restoration effort. (Photo by Zero/6 Consulting & Colzer Co.)

GALVESTON — No sooner than five hours after the beloved St. Mary Star of the Sea statue returned to her place atop St. Mary Cathedral Basilica, dark rolling storm clouds brought two waterspouts that raged over Galveston Bay May 28.

Earlier that day parishioners, neighbors and visitors watched the 2,500-pound cast iron statue rise into the blue sky, lifted by cranes and escorted by workers. Secured in a protective plastic wrap, her eyes also covered as if to keep her from looking down, she was lifted 105 in the air above the Cathedral Basilica and lowered onto her newly refurbished Nicholas Clayton-designed bell tower.

The 11-foot statue, first set in 1878, was removed in September 2019. After receiving an expert $50,000 restoration led by Galveston-based Zero/Six Consulting, she was publicly displayed on ground-level for several months, offering a rare chance to view her up close.

Officials said there weren’t any records to indicate she had ever been removed and maintained in such a manner. The original paint was stripped by hand, pressure washed and blasted for a deep clean before primer was applied, with layer after layer of protective coating. Now encased entirely in a white protective epoxy resin over plaster, the statue’s golden crown and broach were also restored in stunning gold leaf that glimmered in sunlight.

On May 18, Daniel Cardinal DiNardo made a pilgrimage to the statue to view her restoration. He surveyed the large cracks, now sealed and protected, that coursed through the statue as a result of nearly a century and a half of lightning strikes, weather and corrosion. Her hands, which were cracked and fissured, were also repaired. A serpent, coiled around the round base she stands on, is seen crushed by Mary’s feet with its splayed tongue hanging out.

During the restoration process, inspectors found the pedestal supporting the statue had severe moisture and termite issues. A steel frame attached to a large wood timber structure below, which was still partially intact and in healthy condition, now properly supports the statue. More lightning protection was also added. Rust and corrosion was found on her hollow inside, requiring more sealant and protection coatings.

The statue weathered many storms, including Hurricane Ike, which devastated Galveston Island, and Hurricane Harvey. Ike brought five feet of storm surge into the Cathedral Basilica. The statue also survived the Great Storm of 1900, earning her the title of “the Protectoress” of Galveston. With her return just days before the June 1 start of hurricane season, her presence was a relief to the island.

The $2.7 million restoration effort of the Mother Church of Texas, named for its status as the first cathedral in Texas, continues. Other projects include the restoration of the ornamental cross, the original 4,000-pound bronze bell, a 100-year-old organ and stained glass windows, as well as other vital projects. Support the effort online at www.archgh.org/restorestmary.