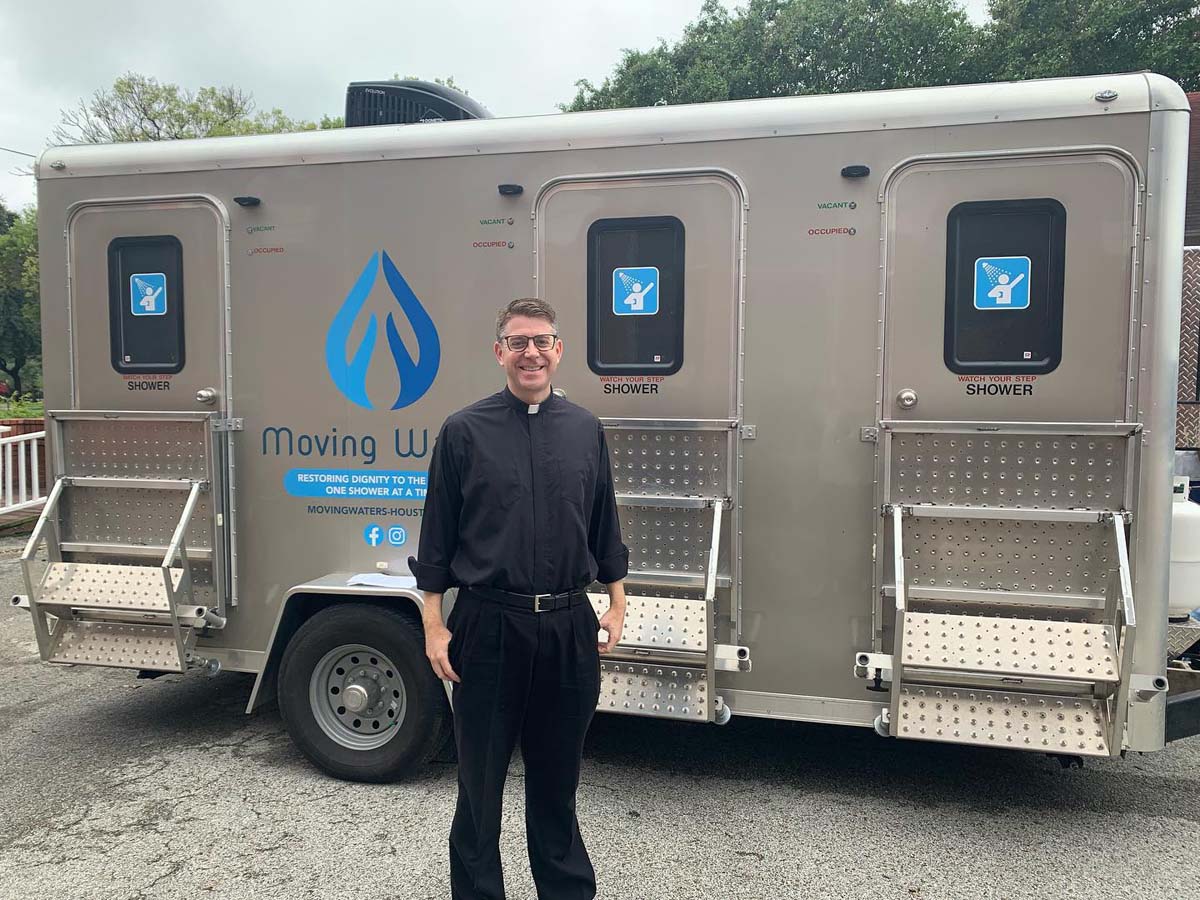 HOUSTON — It all starts with a clean and refreshing shower.

Since Sept. 15, people experiencing homelessness have found a place of refuge from the late summer heat at St. Joseph Catholic Church near downtown Houston.

The parish, located at 1505 Kane St., has been hosting a mobile shower trailer from 10 a.m. to 2 p.m. every Wednesday, in coordination with Moving Waters, a Houston-area-based ministry focused on “restoring dignity one shower at a time.”

The mobile showers offer people the chance to take a hot shower and receive a clean set of clothes, free of charge.

St. Joseph is Moving Waters’ third shower location and first inside the 610 Loop. This new partnership allows Moving Waters to further its mission and provide dignity-restoring showers and hygiene services to even more individuals.

The partnership complements and expands St. Joseph’s existing social ministry, which offers sack lunches for the homeless every Monday from 9 a.m. to 10:30 p.m. and also operates an active food pantry.

Since the onset of the pandemic, reports suggest that at least 74.7 million people have lost work, with most having jobs in industries that pay below-average wages, said Human Rights Watch (HRW). Most of these people who lost work said that they were running out of money and savings, putting them at risk for eviction or homelessness.

In January, some 24 million adults reported experiencing hunger, and more than six million said they feared eviction or foreclosure that spring due to their inability to make housing payments, according to HRW. By contrast, higher-income people have been relatively unscathed financially.

According to a January 2021 report by the U.S. Department of Housing and Urban Development, more people were homeless in Texas last year, with 9.4 out of every 10,000 people having experienced homelessness at some point throughout the year.

The report included include an increase in homelessness by 27,220 people or 5.3% over 2019, and a 2.2% increase, or 580,466 people in the nation, who experienced homelessness in the United States on a single night. 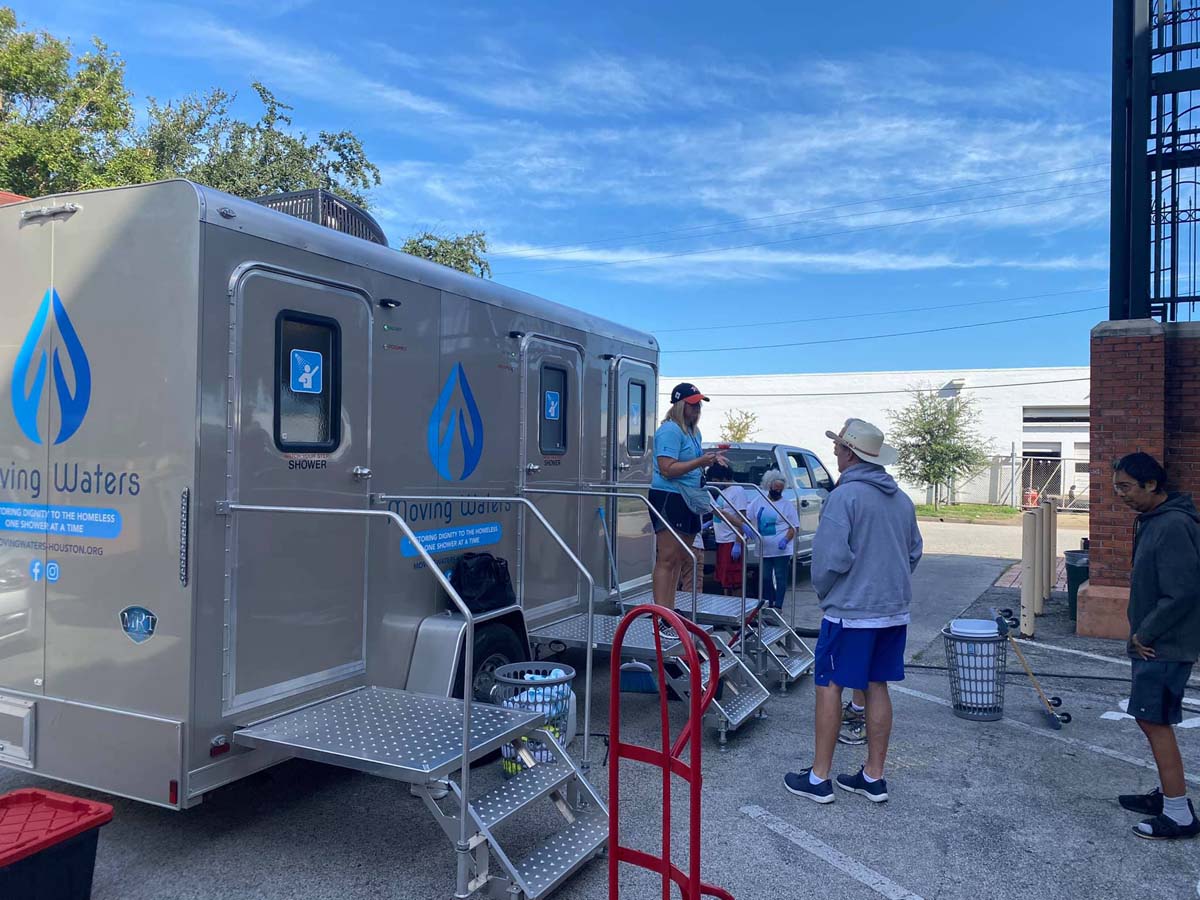 In Houston specifically, a 2021 count and survey by the Houston Coalition for the Homeless found that one in seven people experiencing unsheltered homelessness cited the Coronavirus as the reason for their homelessness. Many cited job loss or reduction in hours as the triggering event.

These struggles are where St. Joseph and Moving Waters hope to step in to help. The relationship between Moving Waters and St. Joseph began when someone connected Father Perez with the ministry.
Near downtown Houston, St. Joseph is a prime location to serve the homeless. Father Perez had already seen a need for such services, having considered building showers on church property.

“It costs us nothing. What a gift of God,” he said. “The trailer is beautiful, and they really want to restore the dignity of the homeless. Inside there are messages on the wall like “You are loved. We have volunteers who spray and sanitize between showers.”

Father Perez said between 17 to 20 people visit with the showers each Wednesday.

“It is an honor for us to serve Christ in the poor and homeless,” he said. “It is great to see volunteers come up from our parish to help out,” noting that volunteers also come from outside the parish community.

“We couldn’t be more excited about this new opportunity to serve our homeless sisters and brothers and expand our reach,” said Jennifer Park, Moving Waters founder and executive director. “We look forward to creating and fostering a community of volunteers and guests as we have done at our other shower locations in northwest Houston.”

Father Perez lauded Park’s efforts in spearheading the ministry, noting she has been at the parish each Wednesday. Moving Waters also provides showers on Mondays in Spring and on Saturdays in Tomball. The organization welcomed volunteers needing to greet visitors and to clean shower stalls after each use. The group is also collecting men’s and women’s socks and underwear.

Part of Father Perez’s vision for the parish is to follow Jesus’s teaching to care for the poor and homeless, which he called “an act of mercy.”

This often includes visiting with them in the parish park, during food service and social ministry efforts. Despite challenges with homeless ministry, Father Perez finds inspiration in the new joint effort and the support coming from parishioners.

“I love seeing how parishioners leave food and soap for them or even order food for them to be delivered to them. We are all poor in God’s eyes and brothers and sisters. I am grateful that they also respect the church, and we are able to leave it open.”

Though not formally a Catholic organization, sources shared that four of the five board members are parishioners at Catholic parishes in Houston. Founded in 2019, the nonprofit has received support from the Cameron and Scanlan foundations. It also had a verbal agreement to serve the Magnificat House in Houston during the summer.

To learn more or to volunteer, visit movingwaters-houston.org.