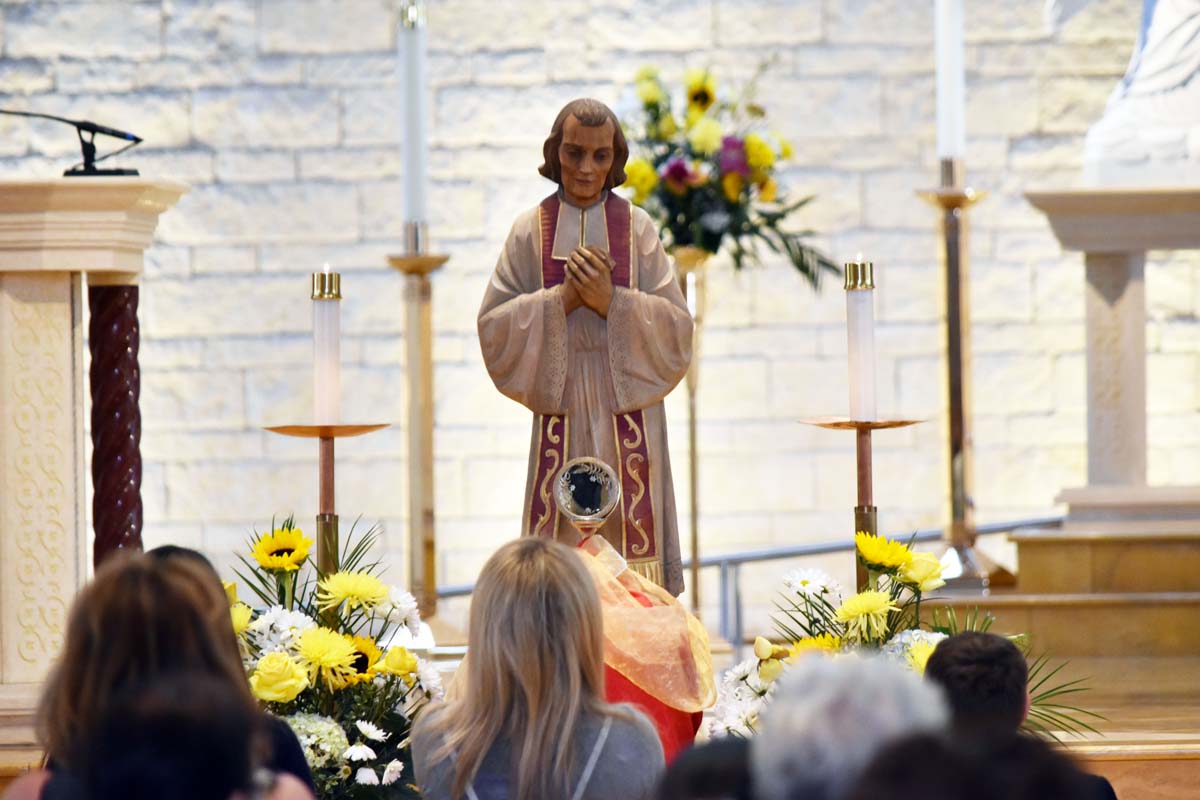 A surprising revelation came along with the relic: St. John Vianney himself once suffered a heart attack and was healed. The parishioners at St. John Vianney in Houston were the first to hear the news during the relic visit on April 14 to April 16.

Father Patrice Chocholski, rector of The Shrine at Ars in France where St. John Vianney served, felt this was especially notable as west Houston continues to heal from “wounded hearts” caused by Hurricane Harvey and the flood.

The parish is located near the Barker Reservoir where many parishioners lost property and suffered flooded homes. Some houses sat under water for over two weeks. Many parishioners are still living in temporary housing.

“St. John Vianney’s heart was so broken, so wounded that only the power of the Holy Spirit could heal it. He is showing us his wounded heart and he is praying for our wounded hearts. He invites us to be connected, to become his family,” Father Chocholski said to SJV parishioners. St. John Vianney was the original Cure d’Ars, or parish priest of Ars.

The sacred relic, which is typically kept with the saint’s incorrupt body in France, has traveled extensively through Europe and to many other countries around the world. After a recent trip to Burgundy, some concern was raised about whether the relic could continue to travel.

A doctor who specializes in relics (called a thanato practeur) was enlisted to make an examination of the heart of St. John Vianney. Just a few days before the relic was due to travel to Houston, the doctor concluded the heart was in a good state and able to make the journey.

Among his findings: the heart of St. John Vianney had a wound which had not been discovered before. At some point in his life, John Vianney suffered a heart problem —most likely a heart attack—and then healed. Official paperwork will follow the doctor’s verbal report.

Father Chocholski didn’t have time to inform his own parish in France of the discovery before departing; thus the parishioners at St. John Vianney in Houston were the first to hear the news.

According to organizers, faithful were invited to pray during Exposition of the Relic and also participate in public veneration during the times before and after scheduled events, which included Mass with the relic in the church, confessions, Eucharistic Adoration with Benediction, morning prayer and other devotions, and a reception. Thousands turned out, packing the church’s sanctuary.

Father Chocholski gave homilies about St. John Vianney, his heart and shared testimony about the saint and his humble life. The relic is enclosed within a gold reliquary. The heart of the French saint was found incorrupt and was removed from his body 45 years after his death.

The saint had several emotional heartaches early in his life, Father Chocholski said. John Vianney was drafted into the military but deserted after a series of delays. His brother was later drafted and died while serving. John Vianney’s mother passed away a short time after and his father blamed John Vianney for both their deaths. “He felt very guilty, he felt his brother died in his substitution when he left the military,” Father Chocholski said. His father would not allow John Vianney to come back home for visits.

While studying for the priesthood, John Vianney further struggled with language and was never able to master Latin. He was teased relentlessly by his fellow seminarians.

“They told him he would never be a priest, or if he was, he would never be a successful preacher,” Father Chocholski said. Even the vicar general had doubts about whether John Vianney should be ordained, but eventually allowed it. He was ordained in 1815.

He became known as a great confessor, and would hear Reconciliations all day long, sometimes up to 18 hours in the summer. By 1855, more than 20,000 pilgrims per year journeyed to his confessional and he was known worldwide.

He had strong convictions about the sacrament and wanted those seeking forgiveness to truly feel the weight of their sins, to “feel the wounded heart of Jesus” rather than simply reading through a list of transgressions. He had a statue of Jesus with his wounded heart exposed installed in the chapel at Ars for the faithful to reflect on before making their confessions.

“St. John Marie Vianney spent so much time hearing confessions, in prayer, in helping the sick, the poor. This holy priest spent all his energies on his people for love,” Father Chocholski said.

John Vianney died on August 4, 1859 and spent the final hours of his life hearing confessions. He is the patron of parish priests and his feast day is Aug. 4

St. John Vianney in Houston maintains close ties with its namesake basilica in Ars. This was Father Chocholski’s second trip to visit the parish in Houston. The parish has also visited Ars on pilgrimage trips and is planning another pilgrimage in 2019.

Born near Lyon, France in 1786, St. John Vianney was a farmer’s son and studied for the priesthood for many years, and eventually was ordained more for his devoutness and good will than for other qualities.

But he became a model parish priest in Arsen-Dombes, where he served for 40 years. He was devoted to his parishioners, and became famous for rigorous preaching and insights in the confessional. †