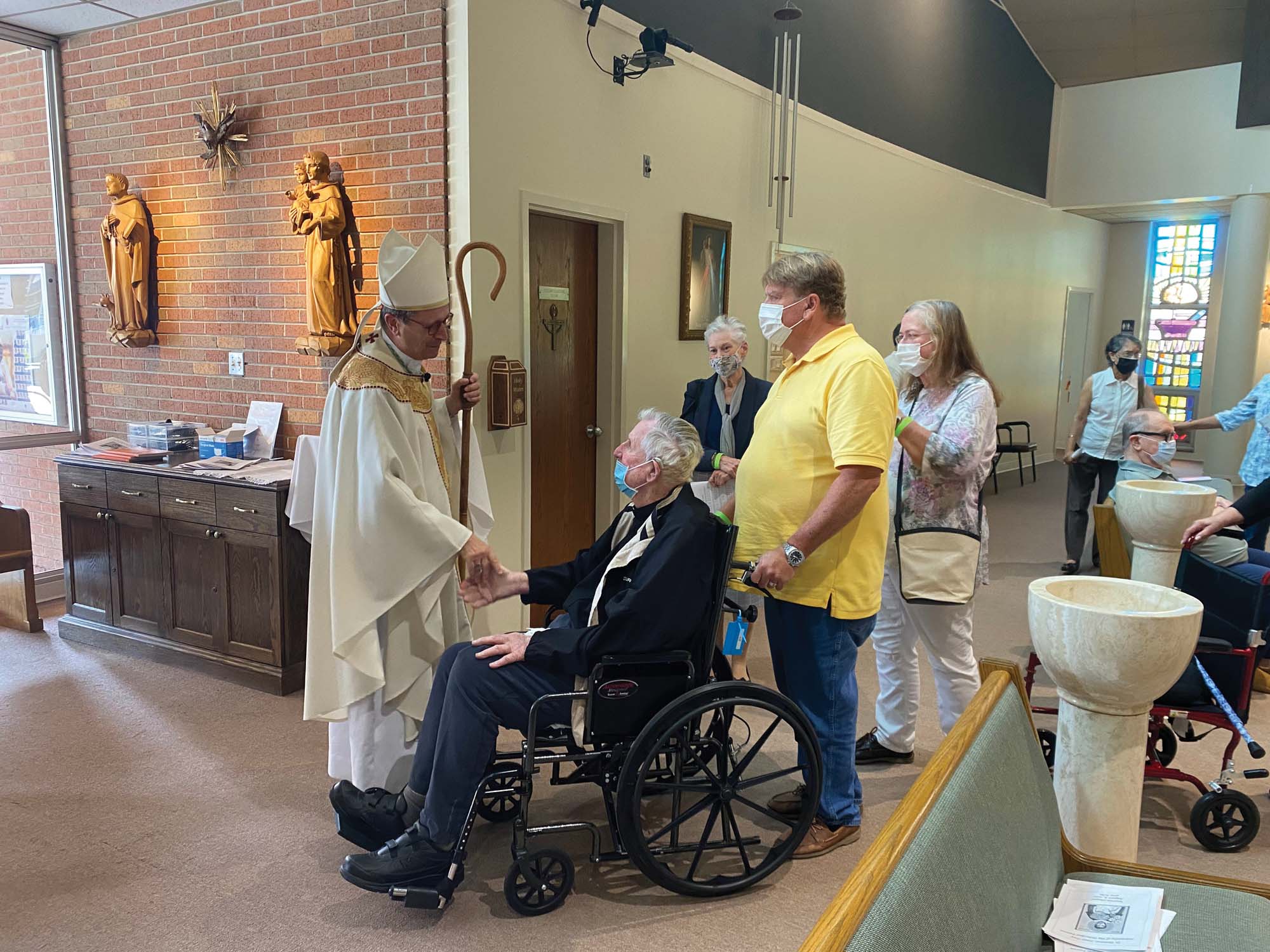 HOUSTON — Hispanic community icon Esther Campos, who served as a Houston school board trustee for 10 years, researched her new way of life as thoroughly as she did public policy.

The 91-year-old decided it was time for her to downsize and move from her East End neighborhood, where she had lived since 1959, off Weaver Street.

“I had ‘auditions’ and toured at least five or six different residential facilities for those who are older,” Campos said. “I did not want to be in the possible hurricane evacuation site south of I-45.”

She instead chose to have an individual apartment in the centrally located St. Dominic Village on a 27-acre, park-like campus off Holcombe near the Texas Medical Center. 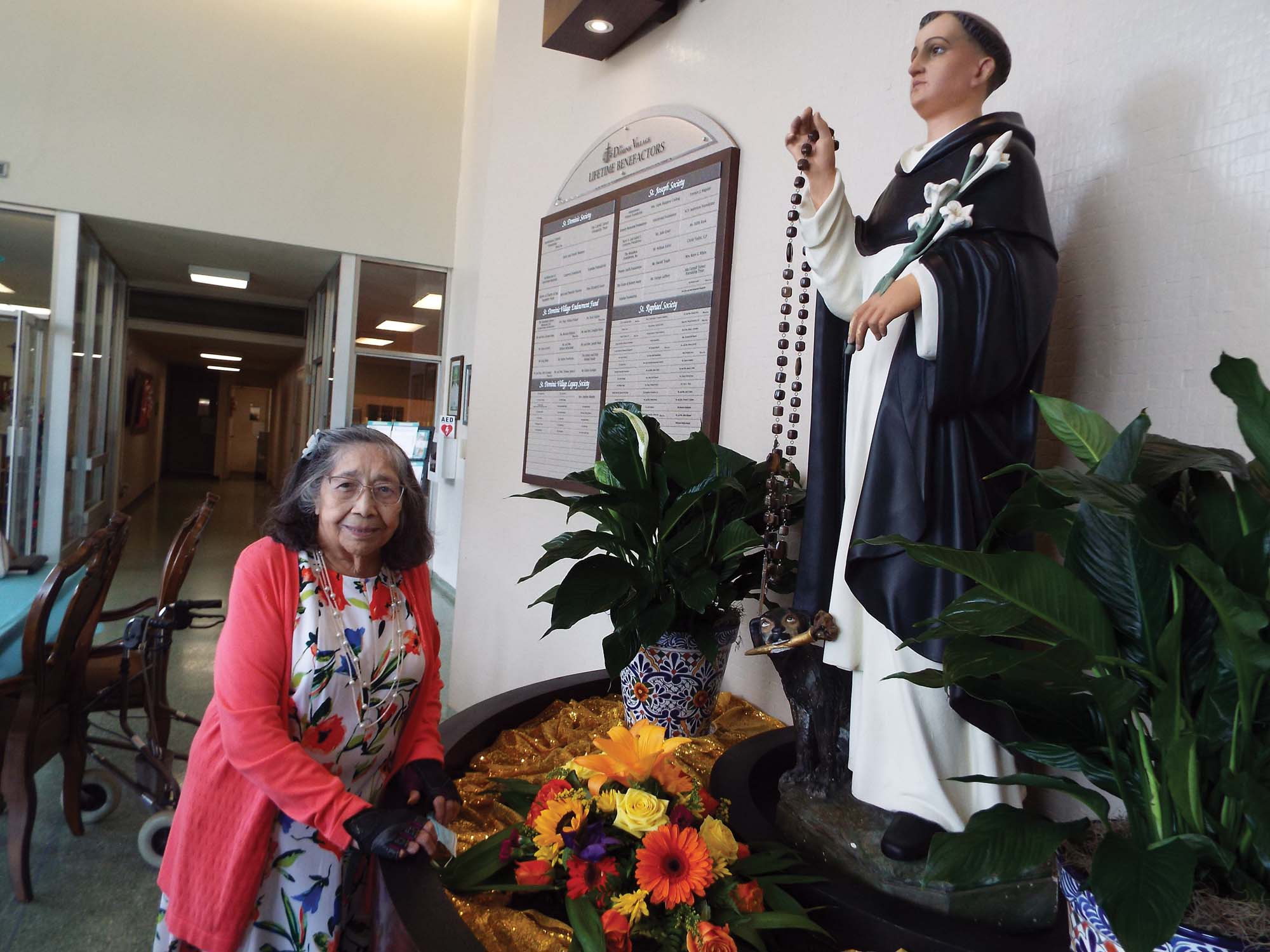 “This area is so well-situated, and they offer you transportation to your doctor’s appointments and shopping,” Campos said of her Independent Living arrangements at St. Dominic.

There is also an Assisted Living building as well as a Rehabilitation and Nursing Center and the Archbishop Joseph Fiorenza Priest Residence on the St. Dominic campus.

The faith-based, nonprofit senior care retirement community is a ministry of the Archdiocese and offers daily Mass at its chapel, which Campos, who now uses a walker, said she at times attends. Yet residents do not have to be Catholic.

But downsizing was still difficult for her. She has gifted many of her possessions, including most of the 100-plus handmade quilts that Campos had created over the years. The remaining 50 quilts will be sold, with proceeds going to Texas Children’s Hospital.

Other items, including furnishings, two sets of china and photos of Campos with former Congressional members Mickey Leland, Barbara Jordan and President Jimmy Carter will be divided among her two surviving daughters, one son, seven grandchildren and 14 great-grandchildren.

Campos was just 25 — married to her late husband Jesse Campos, with four young children — when she enrolled at the University of Houston’s College of Education in 1959. She earned a bachelor’s degree in English and a master’s in Spanish. Campos went on to become one of the first bilingual education teachers in the Houston Independent School District (HISD).

She later worked as a counselor and an assistant principal before being voted in as an HISD school board trustee in 1993, serving for a decade through 2003 supporting anti-bullying legislation as well as the state certification of school police officers — still relevant issues today. Last year, the University of Houston awarded Campos an honorary doctorate degree for her life’s achievements and community service.

Her husband of 57 years passed away in 2011 after they both traveled the world together. One daughter lives in Austin, and another divides her time between Houston and North Carolina, while her son was an active Harley Davidson motorcycle rider until he suffered a stroke and remains in rehabilitation himself at 67, she said.

To keep busy, she praises the activities that St. Dominic offers, including scheduled talks by residents called “Tell Your Story,” art classes and a drumming session that she is interested in finding out more about.

When having lunch recently at the main St. Dominic’s dining hall, Campos sat with retired Sister Ursula McCaffrey, 83, who worked in west Africa with the Society of Catholic Medical Missionaries.

Her bright blue eyes and naturally pink cheeks belied her age, while McCaffrey enthusiastically talked about serving the poor in Ghana and even providing care for a stint among lepers.

Campos said, “So many people here have lived such interesting lives.”

Her daughter Olga Campos Benz, who lives in Austin, said, “Knowing our mother is now living in a faith-based senior community provides us with true peace of mind.”

She added, “It is the number one reason we encouraged her to move to St. Dominic Village.”

Inviting the families of residents along with the public interested in visiting the facilities, St. Dominic Village staff celebrated the Feast Day of St. Dominic on Aug. 8 with tours, a Mass with Auxiliary Bishop Italo Dell’Oro and dinner in its auditorium.

Amy Shields, C.E.O., L.N.F.A., the Village’s chief executive officer and skilled nursing facility administrator, said, “I would describe the event as an amazing success as we celebrated the Feast of St. Dominic.”

“We have not been able to have this annual event the last three years (because of the pandemic). We were so pleased to welcome 200 people to the celebration of Mass with Bishop Dell’Oro, dinner afterward and Bingo,” she said.