Sri Lankan Houstonians pray for family, friends in Colombo who are ‘lost without peace or hope’ 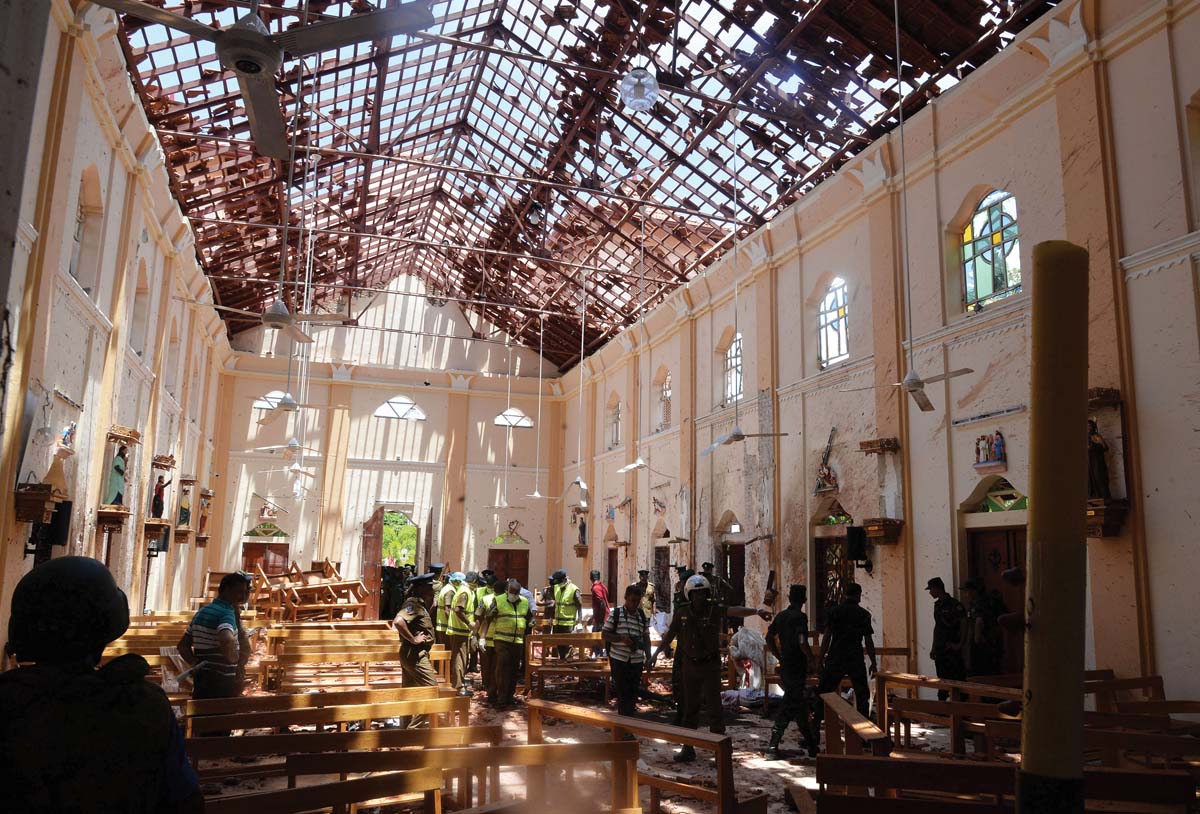 Police officials look over the scene after a bombing at St. Sebastian Church in Negombo, Sri Lanka, April 21. At least 200 people were killed and hundreds more injured on Easter Sunday in Sri Lanka when attackers unleashed an apparently coordinated series of bombings that simultaneously targeted Christian churches and luxury hotels. A person mourns while praying a Rosary near a victim’s grave at Sellakanda Catholic cemetery in Negombo, Sri Lanka, April 23. CNS photo.

HOUSTON — A Houston hospital lay chaplain and her husband called his elderly parents in Sri Lanka on Easter morning to wish them a blessed day. Shortly afterward, the bombings happened.

“They were getting ready to go to 8:45 a.m. Mass and got there before the bombings started. But, with God’s grace, they went to St. Mary’s Church in Colombo that was not bombed,” said Romani Perera, a lay chaplain based at Baylor St. Luke’s Health Medical Center with the Catholic Chaplaincy Corps.

Thousands of Catholics attended Easter Sunday Masses April 21 at St. Anthony’s Shrine in Colombo, which Perera had previously visited, and St. Sebastian’s Catholic Church in Negombo, when both were bombed at about 8:45 a.m. Another church, the Evangelical Zion Church in Batticaloa, and several hotels were also bombed on the island country off the coast of India.

Her husband Manoj Perera’s 79-year-old mother and 85-year-old father panicked. Houston residents as well, they were visiting family in Sri Lanka as a “final farewell” to their native country.

“My in-laws are scheduled to return to Houston May 15, but my mother-in-law wanted to come home immediately. We discussed the tight security, especially at the airport, and long queues and realized they needed to stay there for the moment,” she said.

Not wanting to release their parents’ names for security purposes, Perera said, “They are very confused, lost without peace or hope.” While their immediate family is safe, friends have lost relatives and their children among the more than 250 people killed and 400 injured. Death tolls varied because of the number of body parts counted, news outlets reported.

“Our friend’s cousin lost his seven-year-old son and his wife is in critical condition when they were injured in the bombing. My heart goes out to all who died or were injured in these horrific bombings as they adored our Savior Jesus Christ on Easter Sunday,” Perera said.

Of the bombers, she said news reports show, “These were radicalized Muslims who were well-educated and well-trained. When I was growing up in Sri Lanka and attending Catholic school, we always celebrated holidays with our neighbors, who were Buddhists, Hindu, Muslim and Christian. Together we would celebrate Ramadan or Christmas and Easter.”

The majority of the country’s residents are Buddhists at 70.2 percent, with 12.6 percent Hindu, 9.7 percent Islam and 7.4 percent Christian.

Sri Lankan authorities blamed a local Islamist extremist group, National Thowheed Jamath, soon after the blasts, but say the bombers must have had outside help for the extensive coordination. The Islamic State group (IS) has also claimed it played a role. According to media reports, a total of 80 have been detained so far and several others were killed when they detonated a bomb as they were being raided in a safe house.

Living in Sri Lanka for the first 22 years of her life before marrying and moving to the U.S., Perera said she remembers the civil war that lasted from 1983 to 2009 that pitted the Sinhalese Buddhist government against a militant Hindu Tamil minority. She said just last year, Sinhalese Buddhist mobs attacked dozens of Muslim businesses and even a mosque, believing them to be a security threat. At least one person was reportedly killed.

News reports are stating these recent bombings may have been in retaliation.

“But I never experienced this type of violence. It’s been mostly peaceful there for the last 10 years. Now we don’t know what will happen,” she said.

Malcolm Cardinal Ranjith, archbishop of Colombo, told Radio Canada that he would have canceled Easter Sunday Masses if authorities had warned that Catholic Churches could be bombed.

“Because for me, the most important thing is human life. Human beings, they are our treasure,” Cardinal Ranjith said in a Catholic News Agency report.

He said the Church would halt all services until further notice, and urged parishioners to instead “stay indoors and do their prayers.”

In his Easter address in St. Peter’s Square, Pope Francis shared his solidarity with the Sri Lankan people “wounded” as they “gathered in prayer.” The Holy Father said the multiple attacks on churches and hotels around Sri Lanka “have wrought grief and sorrow.”

“I entrust to the Lord all those who have tragically perished,” he said, “and I pray for the injured and all those who suffer as a result of this tragic event.”

Daniel Cardinal DiNardo, as president of the U.S. Conference of Catholic Bishops, also released a statement saying, “This great evil targeted these churches as they were packed full of worshipers who were celebrating Easter, the day in which Christians around the world celebrate the rising of the King of Peace from the dead. We offer our prayers for the victims and their families.”

He added, “We join with all people of good will in condemning these acts of terrorism. This evil cannot overcome the hope found in our Savior’s Resurrection. May the God of hope, who raised his Son, fill all hearts with the desire for peace.”