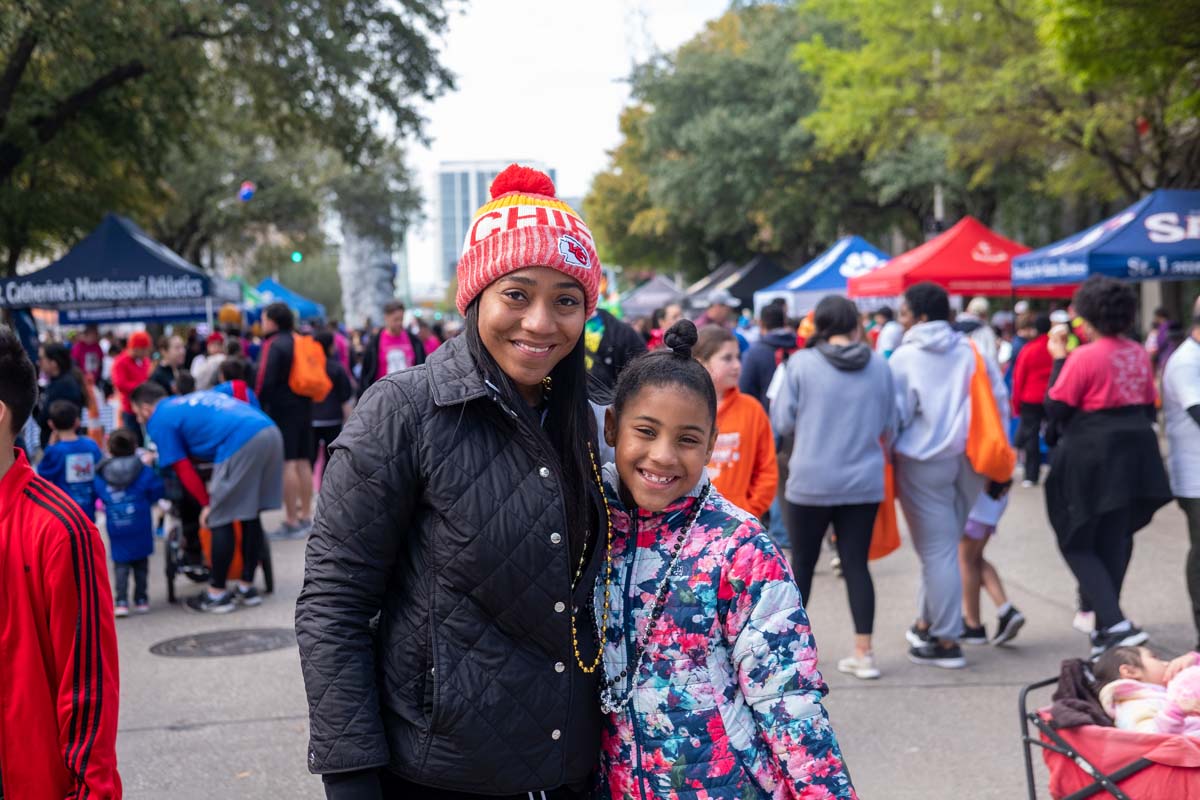 Catholic school students and their families turned out bundled and ready to run at Steps for Students in 2020. Catholic school communities said they were looking forward to the annual race, which also features a festive village that represents the colorful spirits of each school. (File photo by James Ramos/Herald)

HOUSTON — Whether a multimillion-dollar company sponsoring Catholic education or a student and family registering to run in the Steps for Students 5K this Feb. 12, every bit of support helps tuition and other assistance to improve academics, school officials said.

Almost 4,000 have already registered, with more able to sign up to participate in what is one of the largest annual events for the Archdiocese. The day of the race begins with a 6:30 a.m. Mass at the Co-Cathedral of the Sacred Heart in downtown Houston.

Daniel Cardinal DiNardo will bless the crowd at the starting line before the 8 a.m. blast, and colorful confetti rains down to jolt the runners onto the course. So far, 3,911 have registered, and Catholic schools have raised $177,453.31 that goes back to their campuses.

David Harvey Jr., a longtime Steps sponsor with his construction company Harvey Builders, has donated thousands of dollars to support Catholic education. This year, his company is the presenting sponsor with a $20,000 sponsorship.

“We are big believers in Catholic education and its intellectual traditions — the best!” Harvey Jr. said. “Catholic schools elevate the individual student to really benefit the entire community.”

The event continues as a Harvey family affair in running Steps with his wife, Rice University professor Mikki Hebl, and their three youngest children, who are teens. Two of Harvey’s grandchildren participate as students from St. Laurence Catholic School in Sugar Land along with their dad, oldest son David Harvey III, a math teacher and coach at Strake Jesuit College Preparatory, who also runs in Steps and usually finishes among the top 10 runners overall.

“I graduated from Jesuit in ’97 and was cross-country team captain, so running is still in my blood,” Coach Harvey said. “Now I teach math full-time with classes in algebra and geometry from 8 a.m. to 3 p.m. Then from 3 p.m. to 5 p.m., I coach in strength and conditioning in our weight room for all sports in our student athletic programs.”

Previously, a Strake Jesuit track star Reese Vannerson, a four-minute miler, has won Steps in his age category. But now, many regular track meets happen on the same weekend as the Steps 5K, so high school track teams can’t make it as much to the fundraiser, Harvey said.

St. Thomas High School won the President’s Cup last year by getting more than 18% of their student population to register for Steps for Students and raising more than $4,000 going back to their school.
“It’s good for high schoolers to go to Steps and raise money for Catholic schools. And it’s also great networking at the Catholic School Village tents that are set up at Steps,” Harvey said. “The middle schoolers are looking up to the high school students who are checking out the other high school competition.”

The top fundraising Catholic school for Steps as of now is St. Mary the Purification School, offering first through eighth grades and an early childhood Montessori program near Texas Southern University. Staff and teachers have recruited 100% of their 186 students to register for Steps for Students and have themselves registered, raising it to 146%, so far raising $19,362.

“Our main fundraising event is offering each student who registers for Steps a ‘golden ticket’ to watch the movie Polar Express at school, complete with providing goodies and wearing their pajamas,” said St. Mary’s Principal Lois Goudeau and then chuckled.

But COVID-19 surging around the holidays canceled the school’s Christmas party with the last week of classes going virtual. So St. Mary’s rescheduled to show the movie on Jan. 14 instead, when school resumed after the holidays with COVID-19 negative tests. They planned to show the film within smaller individual classrooms instead of all together in the auditorium on a giant movie screen.

“We know it’s not the same, but we’ll make it fun for the students and still have all the goodies. Plus, they get to enjoy participating in Steps for Students,” Goudeau said.

St. Mary the Purification Church parishioners have also been very supportive of the school, the principal said. She credited pastor Father Justin Arockiasamy, S.V.D., for allowing St. Mary’s students to speak at the pulpit to encourage donations for education.

“Father Justin really participates and gets out and runs in the race. The church matches our school goals with donations,” Goudeau said.

To register, sponsor, or for more Steps for Students information, visit www.steps4students.org.