‘Spirituality of Communion’ begins with working together 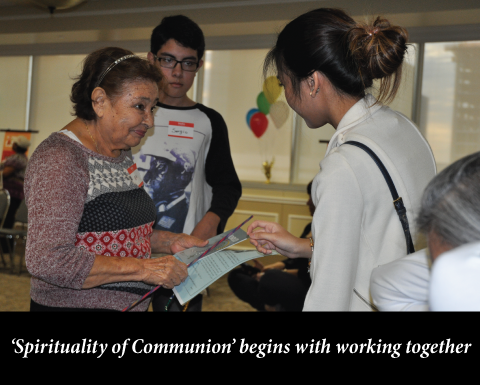 HOUSTON — "The harvest is abundant but the laborers are few." — Matthew 9:37. What overwhelmed pastor, cleric, church staffer or lay minister hasn't heard themselves utter this lament, when even Jesus, moved to pity by the crowds that followed Him, acknowledged this.
That was true when Jesus walked. But now there's 2.2 billion Christians in the world and 1.2 billion of them are Catholic. More than 69 million Catholics live in the U.S. and 1.65 million of them live in the Archdiocese. It's not that there are too few laborers. They're just not organized.
Organization takes vision, commitment, engagement, planning and execution. It starts with a general agreement as to how responsibility is shared.

In the Catholic Church, everyone has a role: "All baptized men and women... must consider themselves jointly responsible for building society according to the criteria of the Gospel, with enthusiasm and boldness, in communion with their pastors," Jorge Cardinal Bergoglio, then-archbishop of Buenos Aires, wrote in 2007.

Just a month after Cardinal Bergoglio became Pope Francis in 2013, he again challenged the laity to take co-responsibility with their pastors in the future of the Church: "We must all take responsibility to evangelize," he said, "to announce Jesus with our life, with our witness and with our words. When we do this, the Church becomes a mother Church that bears children. But when we don't do it, the Church becomes not a mother but a babysitter Church, which takes care of the child to put him to sleep."

Put another way, the shared responsibility of discipleship makes the difference between a thriving, "missioning" Church and a "maintenance" Church on life support.

"We're in this together," said James Barrette, Archdiocesan secretariat for pastoral and educational ministries and spokesperson for the Archdiocese Pastoral Council (APC). "We're all co-responsible with clergy to go out to the world and give witness to Christ in our lives."

In 2011, the APC — comprised of clergy, religious and lay people — began a yearlong canvass throughout the Archdiocese's 10 counties. In listening sessions and questionnaires, the council heard the hopes and needs of more than 7,000 practicing and non-practicing Catholics. One of the burning questions the council asked was, "What can this local Church look like in five to seven years?"

After months of discernment, in 2012 the council recommended to Daniel Cardinal DiNardo the Archdiocese Pastoral Plan, an initiative which would direct parish pastors to work with their lay leaders on a five-year plan for pastoral growth, to find creative and meaningful ways to engage parishioners, and, when opportunities arise, to collaborate with other parishes on ways to live, share and nurture the faith, the three "pathways" which were to become the pillars of their pastoral planning.

In 2013, each of the Archdiocese's 146 parishes was requested to submit a five-year action plan, incorporating actionable ideas and sustainable goals and embracing each parish's uniqueness and cultural diversity. Some parishes sought ways to provide more pastoral care and/or social justice outreach. Some sought more efficient ways of organizing programs they were already providing by sharing responsibilities. For all, it was an opportunity to explore and discern the needs of their congregation and community at-large, to learn how to work together toward the larger goal of making active disciples out of passive or disengaged Catholics.

"When you talk about a pastoral plan, you're talking about a vision. A vision of who we are and where we'd like to go," Cardinal DiNardo said in a 2013 video.

Cardinal DiNardo said the APC drew upon the Second Vatican Council's Lumen Gentium ("Light to the Nations") to describe a "spirituality of communion" as its inspiration for the pastoral plan.

"Being brothers and sisters to one another. Recognizing the uniqueness of individual persons, of the richness of the ethnic groups that are in our Archdiocese, and even the richness of those who need to be invited. Perhaps some of them are those who walked away or never heard the Gospel message. ...Before we do any planning, before we do any calculations, we need to understand that the Church is, first of all, a communion. A body that lives in unity in Jesus Christ," he said.

Lumen Gentium says in part: "All the faithful, scattered though they be throughout the world, are in communion with each other in the Holy Spirit."

"It's not sufficient for us to live our lives in a reactive mode as individuals, but rather to band together, collective and proactive," Father Clint Ressler said at the launch of the Archdiocese Pastoral Plan in 2013. At the time, he was pastor of St. Rose of Lima in Houston. Now he is pastor of St. Mary of the Miraculous Medal in Texas City.

Three years later, some parishes have yet to file their five-year plans. Some parishes have made impressive inroads. Others filed plans but have yet to put them into action. Some parishes began the effort by finding ways to explain the concept of "spirituality of communion" from the pulpit and reinforcing it through parish activities. Still others have filed plans and have found that they've had to go back to the drawing board. Like any process, it takes time, trial and effort, evaluation and when necessary, re-evaluation.

The Herald will examine how parishes are meeting these challenges in upcoming articles in this series.